These coat -clad trees caught my eye as I was driving past a park the other day. What a waste in the name of Art I thought, especially at this time of year when many are cold and homeless. On closer inspection, this proved to be not such a bad idea after all, which just shows that one shouldn’t jump to conclusions.

Here’s what the labels on the trees said: 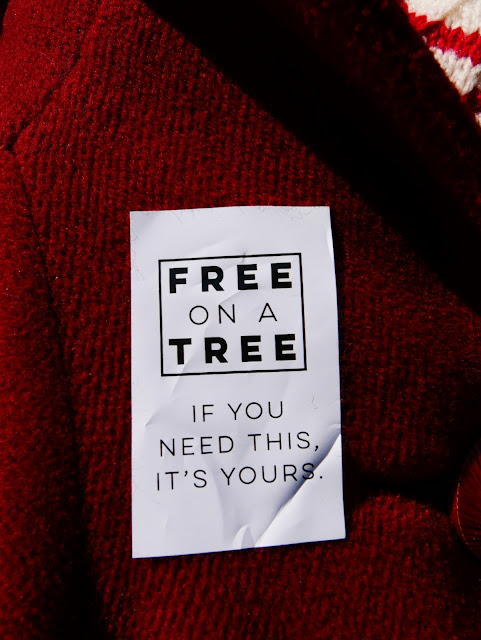 Free on a Tree is the initiative of an 11 year – old – Hobart boy, Oliver Edwards, who thought of it as part of a homework challenge at his school last year, after we had had lots of flooding.  Since then the idea has caught on in a number of places such as Redcliff and Toowoomba in Queensland, as well as other parts of Tasmania. This year he has branched out into blankets as well.
Though you might be sweltering in the Northern Hemisphere just now, it's a great idea worth remembering for when the cooler weather rolls around – a way to anonymously donate a bit of warm clothing  without embarrassing the recipient.

It's also fantastic to see so many young people doing great stuff. I'm just thinking about another young Hobart boy, Campbell Remess , ( he must be 14 by now), who has been sewing hundreds of bears for children in hospital for the last two years. Also the schoolchildren who have been campaigning against Climate Change or raising money for various causes such as our farmers or the Homeless. Just when I am feeling a bit disillusioned and sad, things like this make me think there is hope for humans after all. Go kids!