Ghosts, Legends and a Beautiful Waterfall – Day 2 Queenstown to Rosebery


There’s a new walking track at Karlson’s Gap, the top of the hill before the 99 – the series of bends before you land in Queenstown itself. I didn’t notice it this time but there used to be a sign here warning drivers of campervans, articulated vehicles and the towers of caravans and boats, to beware of the wind gusts that blast up through the valley on the other side and lead you to lose control of your vehicle. I’m still careful. You don’t know either at this point if there’s frost on the road.

The new 30 minute track to Horsetail Falls which you can see from the highway, is a marvellous bit of engineering, yet as it happens, you  don’t see much more of the falls than you could before. They aren’t running so well today and are tucked into the groin of a valley on Mt. Owen. Still, it does give you a chance to pause and admire the scenery. You are surrounded by the mountains named after geological giants of the late C19th.  I was always told that they were named after three supporters of Darwin’s theory of evolution and even -handedly, also three detractors.

That’s not strictly true. At least one, Mt. Sorrell (1144 m), was named after Lieutenant Governor of the day, William Sorrell. It does hold true for Mt. Owen named by Government Geologist Charles Gould, after Sir Richard Owen an English anatomist and paleontologist who opposed Darwin's views. Gould also named Mount Lyell after Scottish geologist and author of “Principles of Geology,” Charles Lyell who was a close friend and supporter of Darwin. On the peak which lies to the South East, Gould bestowed the name Mt. Jukes (1168m) after Joseph Jukes an English geologist, who gathered physical evidence in support of Darwin’s theories and he named the one to the north Mt. Huxley in honour of Professor Thomas Henry Huxley, an English biologist and anthropologist, who also supported Darwin’s Theory of Evolution.
Mount Darwin (1033m and to the South  West) on the other hand was named by Thomas Bather Moore, home-grown geologist, explorer,  naturalist, prospector and a collector of plants for Sir Ferdinand von Mueller. He was said to have been the greatest bushman the region had ever known.  He cut the first useful tracks into the Western Wilderness and traced the outlines of glaciation in the west.  He is also credited with establishing the route of the present day Lyell Highway from Lake St. Clair to Queenstown and named a number of other peaks such as Mt. Murchison, Mt. Sedgwick and Mt. Geikie, following the tradition of naming them after important geologists of the day.  Mt. Geikie for example, was named after Sir Archibald Geikie another Scottish geologist and Director General of the British Geological Survey in 1893. His own name and work is commemorated in a more modest peak,  Moore’s Pimple (515m) and a bend on the Gordon River.
When I stand here on this divide and look around, I see not only layer upon layer of mountains, but ghosts and legends of the west. Apart from our rather depressing convict history, I think this region represents not only some of Tasmania’s most stunning landscapes – but the most exciting chapters in its short life (not counting Aboriginal history for the moment).
My next stop is at the Henty Glacial Erratics Reserve on the A10 about 13.8 Km north of Queenstown. This marks the Western edge of the last glaciation, around 74,000 years ago. There are huge boulders here carved, carried and dumped on the edge of the ice sheet as the glaciers melted. Deep in the rainforest, well about 10 minutes in, a perched erratic (one boulder balanced on top of the other) is dedicated to Clive Loftus –Hills who was Tasmania’s Government Geologist from 1919 to 1923 and became the first doctor of Science at the University of Tasmania. As well as contributing to knowledge about glaciation, he also pinpointed the ore bodies in the region, which not only brought great wealth to Tasmania, but led to the establishment of the various towns 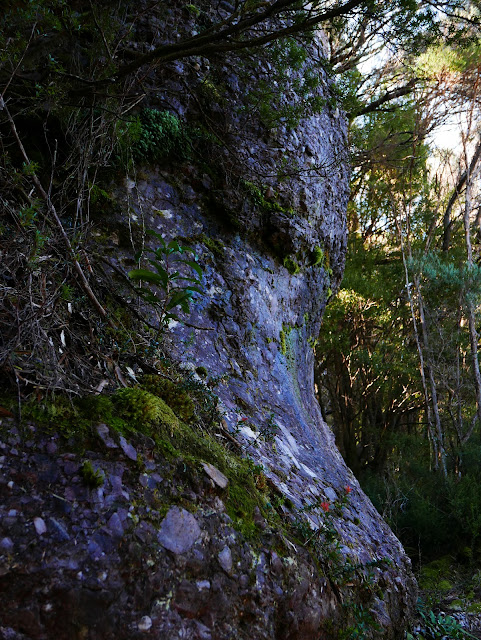 I poke about the Dundas region for a bit looking for another way in to Montezuma Falls. A map I had showed it to be only 45 minutes’ walk from here, not the three hours it used to take from Rosebery. This mission is thwarted by a gate at the most likely road and a steep muddy drop on the Moore’s Pimple track, both of which entail a significantly longer walk than the one from Rosebery. Reluctantly, I choose the latter and expect the worst, as the road was in very bad shape the last time I called. To my amazement, the whole area has been greatly improved. Not only is the Williamsford Road passable, but a nice little picnic spot has been created below the old mine workings.  The walk  which follows the route of the old North East Dundas Tram, has been taken over by Parks and Wildlife, and is now nicely graded and has cute bridges over the old river crossings, especially the one at Montezuma itself.  It’s a bit late to start the walk when I get there and there’s a “No Camping” sign so I park near the old Williamsford mine workings. Williamsford is another, but much more recent ghost town which only shut down in 1986 when the Hercules Mine closed.


After a while a businesslike four wheel drive vehicle roars past and doesn’t return. I assume it’s a ranger and feel smug because I haven’t parked in the picnic area. However, at around 2 am I am seized with a great urge to inspect the new toilet. As I approach with my head torch on, there is a great flurry of activity, a tent is hastily packed up, people jump into the 4WD and hurriedly take off. I get it. They think I am the ranger. Oh well, they scared me too. Didn’t see them the next day either, but both walk and weather are delightful. 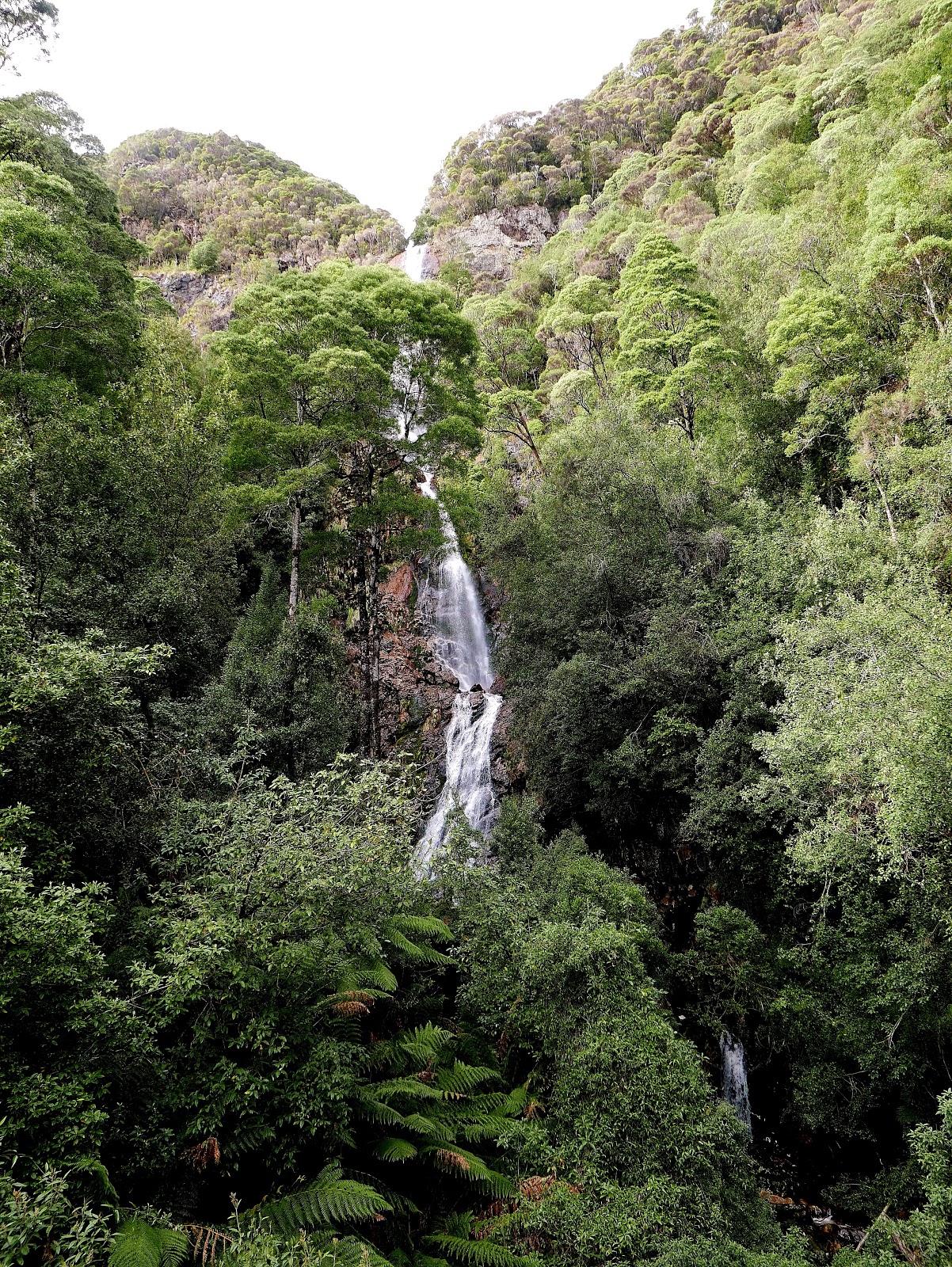 Montezuma falls -a truly excellent waterfall. At 104 metres, one of the highest in Tasmania and an easy level 3 hour walk