The sun hadn’t come up yet when I started on the track to the Gnomon lookout - 1 hour return, before breakfast. It was still misty too, but the clouds lifted by the time I reached the summit and allowed me some splendid views over Mt.Duncan, the Western Tiers and some lush looking farmland to the west.


After a hearty breakfast, I set off again to Mt. Dial. This was a pleasant walk with a few greenhood orchids along the way and lots of birds. Although it was very early, I encountered a clutch of young men who had walked from Mt. Montgomery four hours away. At the base of the last uphill before the summit, I came upon what was the other end of the Gnomon Trail which I had seen at Ferndene, but again there was no indication of its length. I could also have saved myself another trip uphill, if I had seen the Mt. Dial track from the top of the Gnomon as it passed underneath, but although I could see a bit of a scrambly way down, you couldn’t actually see that track from there.
I was a bit worried that if I slid down the rock face for a look, I wouldn’t be able to get back up if it didn’t lead anywhere.  It was very windy at the top of both peaks so I didn’t linger long. From Mt. Dial being further north, you could see the sea as well as the Western Tiers. Note that there are no barriers here to stop you falling a long way down, so do watch children carefully if you bring them here.  Apart from the tracks and that bit of signage, there are no facilities here either, though there are some at the Ferndene Picnic Area.

Wow, two summits before lunch! I’ll have to watch out or my reputation as slothbagger will be in tatters. I also saw one raptor – possibly a brown falcon, near the top - another bonus.  Then, as I was walking back down, the clouds suddenly dumped a light hail storm on me -not long – ten minutes perhaps, with tiny hailstones. It was about the last thing I expected. True, throughout this trip the weather bureau had been promising dire things – winds and storms, snow to 700m, but so far I had been extremely lucky – cold yes, and with loud but dry thunder the night before, but with fair weather for most walks except for a few moments at the Ferndene Picnic Area. 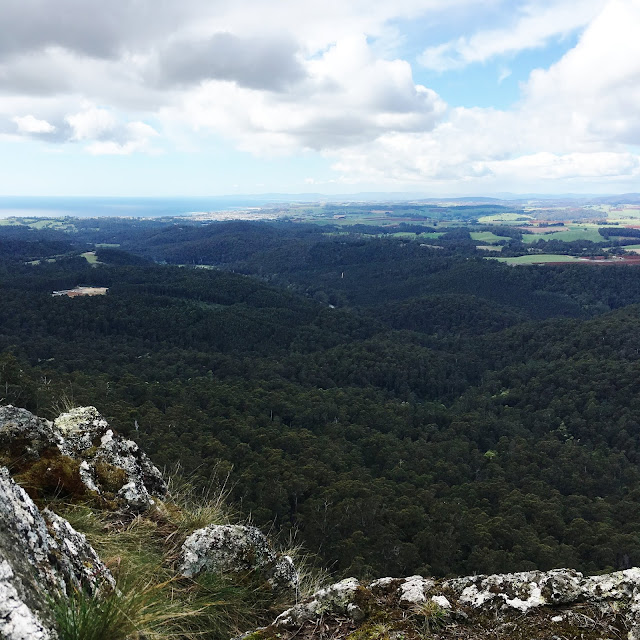 Looking north east you can see the sea
(Alas, only phone pics from now on)

Just as well I had worn a light raincoat and also brought sunblock, water and a hat. You need all four on any given day. The UV is quite intense in that clear air and especially so on the West Coast. On a lighter note,  I tried to charge the camera batteries with the inverter while I was walking because it makes such a horrible loud screeching noise. There were quite a few cars in the carpark when I got back, but none, absolutely none, anywhere near my car. I think I may have found the perfect anti -theft device. Too bad the battery charging didn't work.

I tootled around a bit after that, staying in the same place at Riana that I did last year, enjoying the drive over Gunn’s Plains with its lovely rustic scenery, its waterfall and wild daffodils all around. Then, on the basis of a brochure I had found, decided that I should take another look at Leven Canyon which, being a little off the beaten track as well, I hadn’t seen for many years either. There had certainly been some changes – better facilities, a lovely barbecue area, more walks, a second lookout and the most amazing stairs.


This was pretty much the first time I had had a good signal since Queenstown and a German friend had texted me about the international climate change protests which had been on that day. It made me feel really guilty. Here I was contributing to the problem and using loads of fuel, driving up and down over all those mountains. However, at this stage there didn't seem to be much point in simply turning around and going home. I may as well finish what I planned to do in this area so I wouldn’t need to drive all this way again. Still it puts a bit of a damper on things and gnaws at me all the way home.