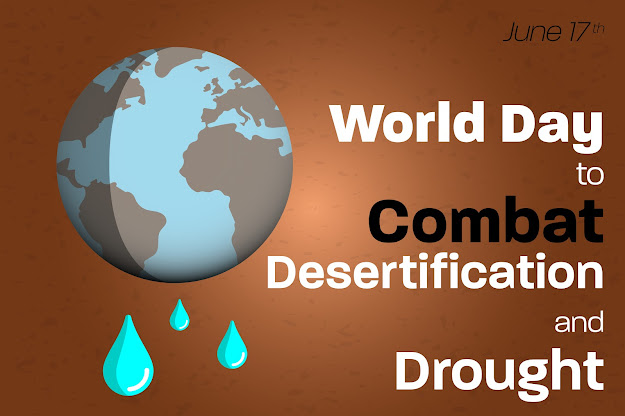 Drought: There are many definitions of Drought, the simplest being. "A prolonged period of abnormally low rainfall, leading to shortages of water." However, drought also refers to a lack of soil moisture, causing crops to fail and surface vegetation to die.

Lessons from history
Someone once told me that the Sahara Desert started because of a ship -building frenzy around the Mediterranean especially by the Romans, two thousand years ago, but I couldn’t find any further reference to that until now. Today I read on Wiki, that it was the result of the rapid expansion of the Roman Empire (beginning with the formation of the Roman Republic in 500 BC), and its insatiable demand for timber - not just for ship building, but for housing, for fuel, for heating homes and bathhouses, for the manufacture of goods such as ceramics and glass and also for mining and smelting, which led to the removal of tree cover over ever wider areas including the coastal regions of North Africa.
Agriculture which followed once the trees were gone, delivered the final blow. Until the Romans came along, the world’s population had grown only slowly and had reached only around 6 million prior to 10,000 BC with a life expectancy of 20 (Livi-Bacci: 1997)*, but the Roman Empire grew to 58.6 million and Rome itself was home to one million, a number not attained by any other city until London did so in the mid 1800’s. The Romans needed to feed this large population and soils were soon exhausted. Grazing by livestock prevented natural regeneration of vegetation, leaving bare hillsides. By the 3rd century BC rapid run off had resulted in serious erosion, the creation of unusable marshlands, the silting of harbours and serious flooding, first noted in 241 BC.
Not everyone agrees with this interpretation. Some argue that climate change, internal divisions and other factors such as slash and burn agriculture also played a role, but the lessons are instructive non -the -less (see Jared Diamond’s “Collapse” 2005)** and deserve serious consideration as desertification threatens to take over more of the world’s arable land. Luckily, the Romans did not yet use electric light, cars or fossil fuels, or their demise may have come about sooner.

How to make droughts worse
Deforestation and desertification themselves are believed to contribute to global warming, future droughts and erratic weather. Cutting down trees releases a lot of CO2 into the atmosphere. Just the loss of vegetation is believed to account for 4% of global emissions of CO2 as well as increasing wind velocity and dust storms (see below).

Spectacular dust storm over New South Wales, Jan 2020
Warming causes more rapid evaporation from the soil and more rapid transpiration (moisture loss through leaves). With less rainwater captured by vegetation, there is less water in the ground to evaporate, make clouds and form make rain - this is particularly true of  tropical rainforest in the Amazon, the Congo and Indonesia and as the air becomes hotter and dryer, it contributes to forest fires, drought, fewer crops and ground cover and more desertification. Simply put, less vegetation means less moisture in the soil, and therefore less rainfall,  and farmers would need to clear and cultivate even more land just to produce the same a yield, thus perpetuating a vicious cycle.
Periodic water stress already affects one third of the world’s people – in other countries it is sometimes disguised by intervening  floods, and whether we want to believe it or not, warming is now undeniable, so how can we prevent further drought and desertification?

Why we need 'environmental water'
Two small footnotes here regarding profligate water use. The giant mine mentioned in the previous post was given an unlimited licence to draw water for 60 years, without a full impact assessment and without regard for future conditions. As one preliminary report notes:
".. some lagoons in the floodplain will be filled less often if Adani is granted the licence, which will threaten endangered ecosystems.
"This potentially indicates an additional risk not only to the lagoon aquatic ecosystems, but also to other long-lived floodplain water-dependent ecosystems (e.g. floodplain vegetation communities, including some of-concern and endangered remnant regional ecosystems,"
Further north, Cubbie station, the largest irrigated farm in Australia at 230,000 acres, claims to only draw flood waters in flood years. However, its dams hold 480 gigalitres (184,000 Olympic Swimming Pools worth to put that in perspective). That water not seeping into the surrounding land means that it too could change the ecology of the region, by for examplelowering the water table and leaving less to flush the river and recharge aquifers. With other cotton farms in the region also taking water legally and illegally from the troubled Murray - Darling river system, they collectively create a  true “tragedy of the commons.”
On the other hand -a word of caution here. In drought -prone Australia, there are frequent calls to return to Aboriginal land management. This may have been possible  while populations were small -it is estimated that there were only around  750,000 people in scattered nomadic bands at the time of white settlement in 1778), but we should perhaps consider why it remained so after 60,000 years, while populations in the rest of the world burgeoned. Hint: Australia simply cannot naturally support large numbers of people without large inputs of fertiliser and technology. Nor did our First Nations people have large scale mining and mechanised broadacre farms.

It's difficult for poor people and small nations to take on more powerful actors such as bigger countries or large corporations, so here are some ways in which people are trying to adapt to conditions beyond their control. See for example what Bangladesh is doing, as well as planting  billions of trees, or what one company in South Australia is doing with seawater and solar energy to produce tomatoes all year, regardless of rainfall. (below).

There's just one more thing which I would like to add. Would those countries which are presently preserving their own forests or claiming to be carbon neutral or close to it, but which are doing so by transferring their ecological footprint or manufacturing to countries which are exempt from carbon accounting, please stop doing so.  I won’t name names, but you know who you are. You are not doing us, yourselves, the rest of the world or future generations any favours.