Some Thoughts on Refugee Week, June 2020

Although Refugee Week finished on the 20th, many of the videos and online events will be available until the end of the month. I’ll include one or two here, just in case. It’s never too late to share a meal, recipes or inspiring stories or to make people feel welcome. 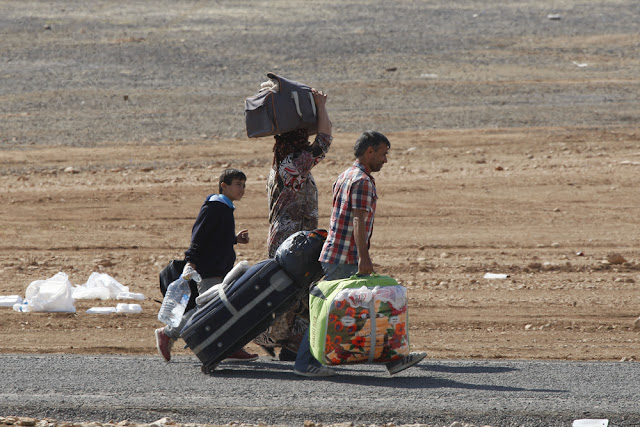 Currently there are around 70.8 million displaced people in the world, the highest number in recorded history. Some are displaced within their own country (40.3 million) because of land degradation or conflict. We have already encountered some of those who must leave the countryside and move to cities because the land can no longer support them, or because of conflict –four million in Yemen alone, or natural disasters.  Others seek asylum in other countries because of religious or political persecution, such as the Muslim Rohingyas in Myanmar,  because of their race or ethnicity such as the Hazara in Afghanistan, or even because of their sexual preferences (Nigeria).

This places great pressure on host countries, particularly if the needs of their own populations for food, work, housing or land, have not been met. This also at least partially explains growing resentment, the rise of nationalistic sentiment, the swing to far right politicians and the rise of groups such as Neo Nazis in parts of Europe. [Similar mass population movements in the 1920s and 30s also led to border closures and contributed to the start of World War II].

After World War Two, 11 million people were displaced, far fewer than we have now, and at the time, places like Australia were in desperate need of skilled workers. There was more than enough work to go around, for locals as well as migrants. The political landscape was very different too. With the war still fresh in people’s minds, when Japan had come perilously close to occupying Australia, the attitude of policy makers was “Populate or Perish,” or they would soon be overtaken by waves of immigrants from Asia. Although migrants faced many challenges, most were able to succeed eventually and Australia gained culturally and economically. How boring would life be without good coffee, pizza, curry and sushi?

The times are harsher now and Covid 19 with its job losses and uncertainty has made acceptance of newcomers more difficult, but imagine having to leave behind your home and your loved ones with no idea whether you will see them again, or where you will end up. Few people would choose this life. Refugees aren’t just numbers, or more people with strange customs and clothes competing for jobs and houses and crowding public transport. Each has a very personal story which will surely break your heart.


Listen to Jamal from Pakistan talk about his gratitude but also his loneliness below.
A conversation With Jamil from Bill+Brown on Vimeo.

Immigration detention happens when people from other countries arrive without prior approval, or they come on a tourist visa or by illegal means and then decide to stay.  People who arrive by boat or with people smugglers have been sent to offshore islands Manus, Nauru or Christmas Island until their case is proven and someone decides their fate. Unfortunately neither journalists nor other Australians are allowed to visit and thus we hear very little about them. At least all but three of the children in those circumstances have now been released so they can go to school and lead relatively normal lives. Alas, for adults, the picture is not so rosy. While some have been sent to the USA and some have been moved to onshore detention facilities or been returned to their country of origin, only 6,597 of the 27,626 refugees who came to Australia in 2016, have been recognised as asylum seekers, with 29, 590 cases still pending at the time of the 2018 -2019 report.

Australia and no doubt other countries do first need to investigate whether people’s stories of hardship are true and whether they are of good character or criminals or terrorists, but the process can be extended almost indefinitely. Those who come by boat or without papers face the longest delays and uncertainty as Australia seeks to discourage this and especially people smuggling. For this reason it is far better to go via official channels such as the UNHCR (United Nations High Commission for Refugees) though queues  may also seem impossibly long.


For a success story watch the video about Dr Aameer Sultan, who received a humanitarian award for his work while in detention.


Any Australians who haven’t seen the ABC drama “Stateless,” (trailer below) should do so now.

More problematic is the situation of  2000 or so young women and children – from several countries, including the UK and other European nations and also Canada and Australia, who are now stranded in places like Turkey and Syria because they or their husbands decided to fight for rebel organisation ISIS, with whom Australia and other countries have been in conflict. This has been the case since the fall of Mosul, one of the Caliphate’s last strongholds. Some have had their former citizenship revoked. Other countries aren’t sure if they can trust them and don’t really want them back, but the plight of the children is a major concern, particularly if they have relatives in their country of origin.

Another ongoing tragedy is the case of a Tamil family from Sri Lanka. The parents Priya and Nades, arrived separately but illegally during the peak of civil war in Sri Lanka in 2013. They married, worked hard and made a home for themselves in the country town of Biloela in central Queensland and then had two little girls. Three years later, after a predawn raid, the government sought to deport them back to Sri Lanka. Fortunately, they had made many friends in the town who were able to halt the immediate deportation, but instead of being allowed to return, the family was banished to immigration detention on Christmas Island, pending an appeal. Despite government assurances that fighting in Sri Lanka has officially ceased, persecution of and discrimination against Tamils continues.

Another controversial case concerns Nauroze Anees, a Pakistani detainee, who came here on a student visa in 2007. When his Australian partner became ill, he became her full time carer and neglected his studies.  In 2011 immigration authorities cancelled his visa for non -compliance and refused him a partner visa. Admittedly Nauroze had committed some offences while homeless in 2011, but over two years ago the Australian Human Rights Commission found that his prolonged detention under the Immigration Act was ‘arbitrary’ and thus not lawful, but he still hasn't been released. Now Border Security wants the right to strip search detainees, use sniffer dogs and seize mobile phones, computers and any other article it sees fit, ostensibly to prevent criminal activity in detention centres. While there are public telephones in detention centres, this would limit the ability of detainees to communicate with lawyers or loved ones in private, as well as denying them a way to record their experience. As it is, we see little enough of what goes on in our name and there are fears that detention services which are run by private contractors are becoming more secretive and more punitive.

On economic grounds alone, we should try to keep people out of detention, especially off -shore detention. According to the Refugee Council of Australia, offshore processing costs around $1 billion a year, while being in an onshore detention facility costs around $346,000. Living in the community while their claims are assessed and provided they aren't a threat, costs one tenth of that and is better for the individual too. Not surprisingly, many asylum seekers in detention become depressed, even suicidal or develop other long term mental health problems.This seems like a terrible waste of human potential. Indefinite detention has been criticised, as has returning people to places without independent confirmation that they will be safe.

How much better would it be if people didn’t need to leave their homes at all? Instead of spending vast sums of money on keeping people out or in detention, what if we could spend this money on aid and diplomacy to prevent the mass exodus of people in the first place? Imagine if the cost of Trump’s border wall and law enforcement could be used to improve living conditions within Mexico, Central America or Venezuela.   Aid to developing countries could be contingent on their governments helping people within their borders to live in peace, even if their beliefs differ.

Just a fraction of the global arms budgets (around $1.7 trillion I heard recently) would be an even bigger boon, but as the world sinks deeper into economic recession, many countries seem to be moving in the opposite direction. The US for example, has deeply cut both its intake of immigrants as well as its foreign aid, leaving a great deficit both in humanitarian placement and support. This results in crowding and reduced rations in the refugee camps, which also lack among other things, adequate hand -washing facilities to ward off Covid 19. One way for ordinary citizens to help is to donate to UNHCR or if you specifically want to help children, to UNICEF. According to the 2018 report by the Australian Refugee Council, the number of unaccompanied children seeking asylum had risen to 100,000 by 2017.  Another way to help is for communities, employers or charities to get together to sponsor individual refugees. See the Refugee Week website for details.

Lastly, a couple of words about Australia, and this is mainly for the benefit of distant authorities who think of it as a vast empty space that needs filling up. As it stands, it has little arable land and little water and can barely accommodate the current and projected populations it already has. Nor is it the easy- going, palm -fringed paradise which is often portrayed on television. Repeated references to it being a rich country also ignores vast disparities in wealth and the fact that it takes thirty years or more to pay off even a modest home.

Although it has managed to assimilate large numbers of immigrants from disparate cultures over many decades, this will not work if we try to assimilate too many people from very different cultures at once. We do not want to recreate the very problems which people are now trying to escape. Despite these reservations, Australia still ranked third among receiving nations in 2016, after the USA and Canada, and accepted almost ten times more than European countries such as Germany (1239)* or Denmark (309) and also New Zealand (404) during the same period. It's also still a only a drop in the ocean of the 1,190,000 or so who were awaiting urgent resettlement.

* There is some confusion here. The above figures come from the UNHCR, yet according to a 2016 report by the BBC, Germany accepted  476,000 refugees in 2015, mostly from Syria and there are thought to be more than a one million immigrants of various categories in Germany in that year. The UN's figures most probably refer to those who sought formal asylum under their auspices, while others await recognition or resettlement before making claims for asylum. There is also a difference between obtaining temporary protection and being allowed to remain permanently. A more recent article in the Washington Post (May, 2019) says that 1.5 million people have arrived in Germany in the past four years. However, it also states that they are now starting to benefit the German economy which is working hard to integrate them, which seems like a much better idea than simply wasting people's lives (and a great deal of money) by keeping them locked up indefinitely.
Email Post
Labels: A caution Causes Difficulties The worsening refugee crisis What we can do