Saving Insects - 1 why we should 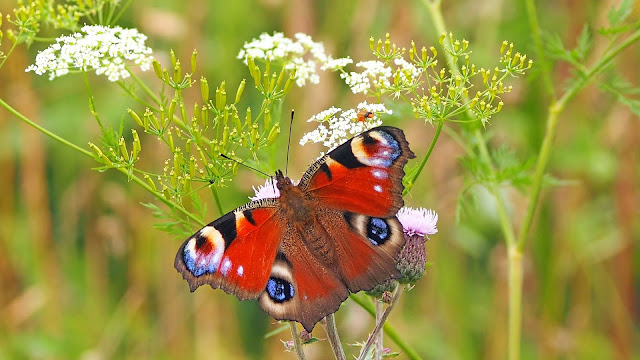 Image by kie-ker from Pixabay

Imagine a world without butterflies or beetles. It’s not just the birds and the bees that are in decline around the world. Insects in general, are in serious trouble too. Indeed, although it didn’t get much press, it is very likely that the loss of birds may also be connected to the loss of insects, especially with respect to insectivores such as swallows, swifts and martens which have been among the hardest hit.  It is also very likely that the decline of all three - birds, bees  and other insects, are due at least in part to the widespread use of broad spectrum pesticides, especially those containing neonicotinoids because of their persistence in soils, waterways and plants and those animals (including humans) who consume them. According to a study in the Netherlands declines in bird populations correlated closely with higher levels of residues of the neonicotinoid imidacloprid in surface water. Longterm studies conducted in 63 protected areas in Germany over 27 years, also show similar trends and have raised concern about the growing loss of biodiversity.

Insect losses are currently estimated at 9% per decade. Though somewhat less than previously thought, they vary greatly between  species and locations and are still a major cause for concern. Airborne species in Germany for example, appear to be faring considerably worse. In the UK aquatic species appear to be on the rise which is presumed to be due to improved water quality in rivers and lakes, yet elsewhere it may be because they have lost major predators such as frogs which are huge consumers of insects but more sensitive to changes in water quality. Fewer birds can also result in an insect explosion in ensuing years. Although Climate Change is factor, the great variation between places led researchers in the German study to conclude that neither it nor land use change were the primary causes. Data is also still lacking for many regions and species

While most of us wouldn't complain if there were fewer mosquitoes, flies, cockroaches or other destructive, annoying or disease –carrying pests, the methods we have been using to rid ourselves of these also destroy many beneficial organisms as well. Praying mantises for example, of which there are some 2400 species, will eat enormous quantities of aphids, grasshoppers and other pests including specific ones such as cucumber beetles. No wonder they are seen as good luck symbols in some cultures!  Spiders, though not insects themselves, will consume large numbers of insects in our homes if we let them.Since insects are at the lower end of the terrestrial food chain and the effects of broad spectrum insecticides are cumlulative, we are undermining the very foundations of life by destroying them. The German study reports that 80% of wild plants rely on insects to pollinate them and 60% of birds rely on insects as a food source, so the loss of insects will have a big impact on biodiversity. See for example how the demise of Bogong Moths in the Australian Alps is likely to affect the endangered Pygmy Possum. These cascading effects will sooner or later affect humans as well. Read more on this topic here.

Image by Lubos Houska from Pixabay

We already know that bees pollinate most of our crops, but did you know that without dung beetles to remove waste our cows would drown in cowpats and would be overcome by disease? Dung beetles also transform this waste to make nutrients available to plants. Some plants actually benefit from light predation by insects, putting out more shoots or specific hormones which boost their survival in much the same way that pruning benefits roses. The mere presence of pest insects is often a sign that the plant or the soil is deficient in some way. Other insects are predators on the very insects we wish to kill and the use of poisons to kill off pests, also kills them. Using the new fast acting rodenticides for example, not only kills off rats and mice, but also birds such as harriers and owls which are among the best biological pest controllers we have. This has inspired initiatives such as the Hungry Owl Project which has been running in Californian orchards and vineyards for the past ten years and also the UK’s Barn Owl Trust, which encourage the placement of these birds instead of using chemical weapons.

Image by No-longer-here from Pixabay

What governments are doing

At the national level, three of the world’s four largest producers and exporters of agricultural produce – the EU, China and Brazil have now restricted pesticide use in some fashion. The EU has banned 72 of the 500 insecticides in use in the USA, especially of the ‘neonic’ type, not only for environmental reasons and the connection to bee decline, but because it has been discovered that they may also cause damage to human health. The EU has also banned aerial spraying and allows no spraying at all near residential areas. Would that our councils would take note in regard to parks and nature strips! I would be interested to know what is being used on all those timber plantations too.

China has restricted the use of 17 pesticides and plans to phase out 12 more by 2023. Brazil has banned 11, but is under pressure from agrochemical companies to reverse its decision. Unfortunately the USA, which used 1.2 billion pounds of pesticides in 2016  making it the second largest user such products after China, has not yet instituted bans, although some manufacturers have voluntarily withdrawn some of these products from sale and some states such as California have been going it alone. As with efforts to halt Climate Change the USA has not signed or ratified the 2004 Rotterdam Agreement regarding Agricultural chemicals and is the only one of the big four agricultural producers not to have done so. Although the US Fish and Wildlife Service was on track to phase out neonics in wildlife refuges by 2016, the Trump Administration has since reversed that decision, without revealing its reasons for doing so.

Despite this, pressure from groups such as the Bird Conservancy and consumers has led to many large stores such as Walmart and Home Depot removing some of the more harmful pesticides from their shelves and while Australia has also been dragging it's feet with regard to legislation, major retailers have also responded to public pressure -especially from beekeepers (who have been watching the decline of bees elsewhere with alarm), and  withdrawing specific brands from sale.

Next Post ... 2. What Farmers are doing instead of using pesticides and the last one will be about

Email ThisBlogThis!Share to TwitterShare to FacebookShare to Pinterest
Labels: Causes and Remedies, Insect Decline, Why it Matters