Mini Roadtrip to the South West 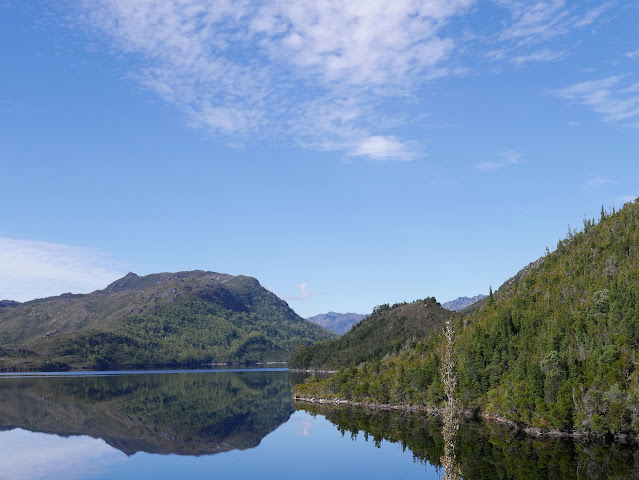 Got quite depressed last week reading about all the things going on in our Parliament and with Mental Health leave being all the rage, I thought I’d take a short mental health break myself.

It was “Goldilocks Weather” according to the Weather Bureau meaning that it was neither too hot, not too cold. That’s a nice change from the weather you usually encounter in these parts, though it isn’t actually all that far. My GPS says it’s two hours and 17 minutes from Hobart (253 Km), but that doesn’t allow for all the bends, hills, a spot of sightseeing here and there,  or a few roadworks or bad weather, so I  gave myself at least five hours for a leisurely drive down.  I was hoping to find a couple of fungi as people had started posting some interesting ones and I’d found some excellent specimens out this way last year, before the weather put a stop to it.

Unfortunately that wasn’t to be. It was quite a lot drier than last time and fires had been through some of the denser vegetation. Even the walk to the Needles which I did last time was now just a burnt out wreck, so I just kept driving.

There were other ‘bones’ too. Bleached trees like pickup sticks around the edges of the dam and skeletal ones, blackened by fire, but the views from the Lake Pedder Lookout were striking enough.  Lucky I didn’t see the original one with its pink quartzite beaches before it was dammed, or I might have been sad. True Tasmanians who remember it have never forgiven that, even my ex. who worked for the Hydro. Its flooding in 1972 sparked the creation of the United Tasmania Group which is regarded as the world's first environmental organisation. Although it failed to save the original Lake Pedder, it gave rise to the Tasmanian Greens who then went on to save the Franklin River from a similar fate. I doubt that Tasmania would have had a tourist industry at all had it not been for them.

I spent the night at Ted’s Beach a camping spot on the edge of the lake, about 15 Km before Strathgordon. It had toilets, untreated water –you have to boil it, a picnic shelter and electric BBQs all of which suited me perfectly. The new Lake Pedder is a mecca for boaties and fishermen, usually one and same and there were a few of them scattered about. I imagine that if there was no pandemic and it was a normal tourist season, there would have been standing room only here, but sometimes good things can come out of bad ones. There was hardly any traffic on the road either.

Next morning I took  the side trip to the Serpentine Dam. The rugged hills and dense vegetation reminded me of my beloved West Coast. After an easy walk across the dam wall I could see an intriguing set of stairs running up the side into the hills above. How could I resist? I soon found myself on a pleasant little bush track which stopped abruptly at a sign.  There were all the usual warnings plus  Very Steep Grade, and  TRIG 500 metres. Did I mention that I wasn’t a peak -bagger? Still 500 mts.  seemed doable, even for me.

The beguiling little path now turned steeply upwards and became a climb rather than a walk. This meant hauling myself up using sawn posts, saplings, rocks, tree roots or whatever I could reach. It was also very wet -a running creek bed in fact. I soon regretted not changing into my boots. Every now and then my shoe would get bogged, my foot would pull out and the shoe would fill up with mud. The only good thing was that you couldn’t see far ahead and I kept thinking I just had to reach the next little ridge and that would be it. Eventually I came to a bit of a grassy hillock. On top were two rusty posts – bits of railway line I suspect, and I assumed I had arrived. There was no trig point, no drum roll and no sign but it certainly felt like I had gone quite a few miles.

I sat around for a bit, catching my breath and taking in the 360o  views. Far below canoeists were exploring some of the inlets. Then I started sloshing my way back down. As I was leaving I noticed another little track snaking off to the right and towards another set of hills. It wasn't as distinct as the one I had come on, but a path nonetheless.  I asked at the Chalet later if the posts were the summit.” Don’t know,“ said the young woman. “Never been there, but I do know that it’s the start of an eleven day hike.” OK, that was enough for me. I’d had a pretty good workout and had gone just about as far as I could. At least I had a better trip than the chap below. Mt. Sprent is the next peak along.

Afterwards I drove to the Gordon River Dam, at 190 m the largest arched dam in Australia.  Built in d 1972 it holds back about the same amount of water as six Sydney Harbours and it is certainly a stunning sight. Although it's an amazing engineering feat, it looks it looks way too fragile to be doing the job it’s doing.

It was getting a bit darker now. I;m not sure if that signalled that there was about to be a change in the weather or whether it was just getting late. As it was still fairly warm I thought I might stay another night and decided to take a look at two other campsites along the Scott’s Peak Road, another area I hadn’t really explored.

The campsite at Edgar Dam was more rustic than the one at Ted’s Beach – composting toilet, no electric BBQs, but quite pretty. Too bad it’s down 34 Km of unmade road and there’s not much of interest around it unless you’re a fisherman or just enjoy wide open spaces. The next one - the Huon Campground 7 Km further on, was a bit more difficult to get into. Larger vans would have trouble squeezing under overhanging trees. It was also the start of the six day South Coast Track. Tempting as that was, I had neither the gear nor the stamina for that. Just as I was heading back to the other campsite, a message came through on my phone.

“Where are you?” ”When will you be back?” As I'd already told him I might be away two nights, I was a bit worried that something might be wrong at home, but couldn't text him back. There’s no signal anywhere here once you go past Mt. Field, which made it all the more curious that he could reach me but I couldn't reach him. I was also worried that like his Dad - bless his heart,  he might start calling in the troops. More than once when we returned late from a misjudged walk there'd be a posse of Parks and Wildlife personnel or the Police getting ready to mount a search. Still, it beats the alternatives such as lying at the bottom of a gully with a broken ankle or worse. That's also the reason you should always sign in and out even on a short walk like the one I did.

Reluctantly and carefully I drove back over the 34 Km of unmade road- the van is old and there are some big potholes- and then all the way back to Hobart, but it was a nice little break all the same. Non - fishing people might find there's not much to do here - there are meals and a heated pool at Strathgordon, but that's the point really -a device -free weekend with no pressure to do anything except enjoy the scenery, the quiet and the sense of remoteness.