Turning into Gold 1 - Autumn in the Derwent Valley

It seems a very long time since I last wrote. Alas, my computer had a near death experience so it has taken a little while to get up and running again. Before launching into more serious topics, I thought I would share some pictures with you because this is such a lovely time of year in this part of the world. These are from a little trip through the Derwent Valley a couple of weeks ago.  I’d almost forgotten how lovely it was to see the turning of the leaves. Our Asian neighbours are onto something there.

The day started perfectly. A light haze still hung over the river as I set off and above it the hills were a deep Prussian blue. With its fringe of deciduous trees, the river looked just like the painting on my old pencil box and I could see why the Derwent was named after its namesake in the UK.

As I was passing through New Norfolk, there was a lively market in progress. Except for a short lockdown at the start of the pandemic this market has been going every Saturday for the past three years but this was the first time I’d caught it in full swing.  The seventy or so stalls which lined the main street had all the things you’d expect – arts and crafts, plants, lush produce, an excellent selection of bread, homemade jams, cakes and preserves - I even got the socks I usually buy at Salamanca, but it also had more unusual items such as Andrew Colemans’ fungi wonders like Mushroom Coffee and Mushroom Chai, Fungi Facemasks and Mushroom Jerky. He also supplies fungi for medicinal purposes.

Another surprise was the amazing array of alcohol on offer.  Thinking here of The New Norfolk Distillery’s Rebellious Spirits such as New Horizon Rum or Martian Sky Whisky or the Metcalf Distillery's Scandalous and Reckless Gins. I was rather tempted to try a sip, but just as just as well I didn’t. Five minutes after I left the venue, someone ploughed into my tow ball which would have been a very bad look if I had had a drink. I did however, buy a can of Welcome Swallow Brewery’s Hop Therapy beer for my son. I don’t drink beer so I have no idea of the quality, but I was very taken with the artwork on the can. The nice thing about all these products is that they are mostly made from local produce. Nigel Graham and Elias Eicher for example, grow their own hops for Welcome Swallow, Dean Metcalf grows his own rhubarb and uses foraged fruit as well.

As you can see from the pictures there were some real characters there too. Two other things also caught my eye. The first was the fact that New Norfolk’s famous Cake Lady has moved to the main street which is great as I couldn't find her last time. There was also a new cafe and gallery the artHouse which has only been open for six weeks. It features a changing themed exhibition of local work and I especially liked the high quality art and craft materials for children. The owner was too busy to talk, but I can vouch for its very excellent French Vanilla Slice, duly served on a little cardboard tray with a bamboo fork so I could take it away. 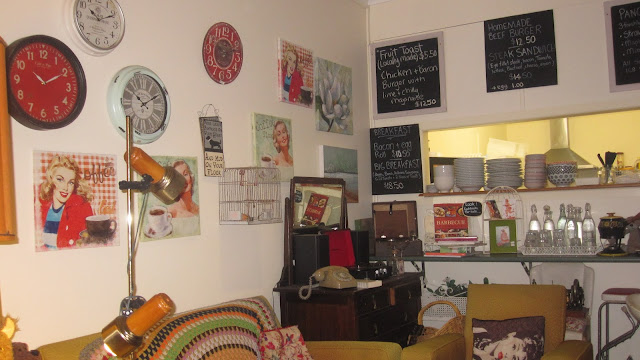 Quick peek inside the Cake Lady's new premises. I see the eclectic decor is still there, but for some reason I am in the mood for a Vanilla Slice today
Then it was off to Mt. Field, Tasmania's oldest and most accessible National Park past now deserted hop fields and cherry orchards in their in their winter clothes. Having eaten too well at the market, I didn't go into the Salmon Ponds but couldn't resist taking some photos of the drive so resplendent in its autumn colours. 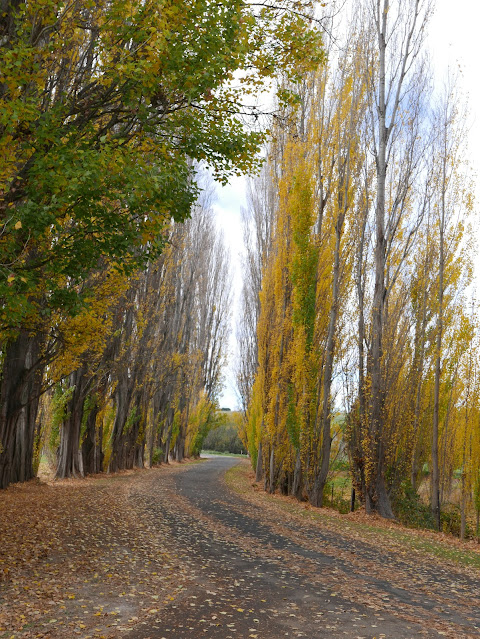 Email ThisBlogThis!Share to TwitterShare to FacebookShare to Pinterest
Labels: Autumn in the Derwent Valley, Tasmania, The New Norfolk Market