A better life for Farm Animals

France will ban the cruel practice of culling live male chicks by the end of 2021. Germany will do so from the beginning of 2022. An estimated 7 billion chickens are currently killed shortly after hatching. However, new techniques are now available for determining the sex of chickens while still in the egg. France is also banning the practice of castrating pigs without the use of anaesthetics.

The Australian Capital Territory (ACT) is the latest state and the first Australian state or territory to ban factory farming for chickens. It also bans cages for pigs and the debeaking of hens. Tasmania will allow no new battery hen operations from 2013 and is fast tracking legislation to outlaw sow stalls. Eight US states and at least two Canadian ones have banned battery hen farming and EU Member states were to have complied by 2012 and will soon begin to prosecute recalcitrant states. Switzerland  has had legislation to ban cages since 1981. 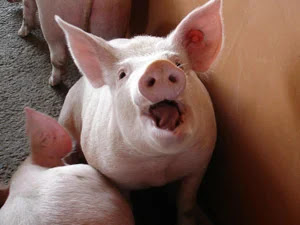 - My thanks to the unknown author of this

Sow stalls, the tiny cramped cages that pigs have traditionally been raised in, have now been at least partially banned in Sweden and New Zealand since 2015 with Finland, the Netherlands and nine US states set to follow. Under the UK's new Animal Welfare Plan unveiled in May 2020, the use of cages for hens and farrowing crates for pigs will not be banned outright, but farmers will be encouraged to change their practices - some 16 million pigs and chickens are still raised this way, through the use of financial incentives tied to farm subsidies.

According to a November 2019 report in the Guardian, England and Wales will be the first countries  in Europe to ban live animal exports for slaughter and fattening. This is a win made possible by the UK's withdrawal from the European Union, but it is hoped that the new Action Plan will help to restore the UK as  a leader in animal welfare. In 1824 it was the first country to have a Society for the Protection of Animals. However, the new ban will not cover breeding chicks, an industry worth ₤138 million (almost $US 2 million) in 2018, or the export of live Shellfish.

Scotland has stopped the live export of male dairy calves since November 2018. While this was in part due to Brexit, it is also due to advances in technology. The use of pre -sexed semen means that there are fewer male calves being born and it's expected that this technology will also help the approximately 95,000 calves which are killed each year (2018 figures) because they are surplus to requirements in the dairy industry. Dairy farmers will have until the end of 2021 to cease the killing of male calves. A number of retailers such as Sainbury's, Waitrose and Marks and Spencer, have already banned both the slaughter of male calves and their export from their supply chains.

Within the EU there have been strong welfare laws governing live export since 1991, however a 2018 Danish study found that in practice, enforcement is uneven, the trade has actually increased, rather than diminishing and that distances and hence stress on animals, were now longer.

As of April 2020, China has reclassified dogs as pets, not livestock, which means that they can no longer be raised for food, fibre, medicine, sport or military purposes. South Korea's largest dog meat market closed on July 1, 2019, with many others following suit. President Moon Jai -In is currently contemplating a ban on dog meat amid calls -mostly from young people, for more animal rights.

The impact of vegetarianism

Farm animals will also catch a break as more people become vegetarians and vegans.Vegans eat no animal products at all, while vegetarians eat no meat, but may still consume eggs, cheese, milk and so on, which don't involve killing the animal. This matters because agriculture takes up 50% of the world's land area and of that livestock farming and growing of animal feed takes up 77% while only producing 18% of the protein. This not only adds to global greenhouse gas emissions directly, but also indirectly through large scale land clearing in places such as the Amazon. This is a double whammy in that removal of vegetation not only releases large quantities of stored carbon, but cut trees can no longer to remove it from the atmosphere.

“It is a challenge to find products and materials that support animal welfare. But that’s no reason to avoid this important issue,” Templar said. “It is a journey that is worth taking. If you’re progressive and sustainable in your thinking, you have to ask yourself tough questions and actively try to find answers.”

Read More: Volvo Is Removing All Leather From Its Future Cars | The Beet | https://thebeet.com/volvo-is-removing-all-leather-from-its-future-cars/?utm_source=tsmclip&utm_medium=referral

According to market research company the European Monitor International, per capita meat consumption is falling around the world while the market for plant - based foods has grown by 9% and now accounts for $USD 40 billion in sales a year.  If a BBC survey of 1000 children aged 5 -16 is any guide, then that market is likely to keep growing . The survey found that 8% of children were already following a vegan diet  and 15% a vegetarian one while another 21% who weren’t, would like to be.

In Germany, German supermarket chain and food producer, Veganz found that the total value of meat products sold in Germany fell by 4% in 2020 compared to 2019. By contrast, sales of plant-based alternatives skyrocketed by 39%, suggesting there has been a permanent shift in tastes, especially from younger consumers. Last year, a poll found the number of vegans in Germany had doubled in just four years and now account for around 3.2% of the population or 2.6 million people. Four.four per cent were vegetarians, double the number of four years ago. Supermarkets are bristling with new products in order to capture this market. German supermarket chain Aldi now sells vegan bacon and we have recently tried two types of vegan cheese. While I may not have been too enthusiastic about the vegan sausages, I do enjoy coconut yoghurt and almond milk. My one reservation about these - especially the coconut -based products, is that should they become wildly popular, they could lead to more land clearing for palm plantations in tropical regions, something we should also avoid. However, their impact would most likely still be lower than raising animals for meat.

In 2020, private investment in the alternative protein market stood at $3.1 billion an increase of 300% over the previous year. This includes meat cultured from live animal tissue. No animal is killed for this purpose as you can see in the following video. After two years of testing Singapore has just approved the sale of chicken nuggets made in this way in high -end restaurants, but the scale of production remains low and the energy costs high, so they are not yet for general consumption.

In June 2021 Estonia became the 14th European country to ban fur farming and the first Eastern European one.

Israel has become the first country to completely ban the sale of all fur products, including imports and exports. Expect this to be the first in a long list over the next few years. Several other countries including the UK may have banned fur farming, but have not stopped the import of fur from elsewhere.

Valentino and Nordstrom have joined the ranks of luxury fashion brands such as Gucci, St. Laurent, Ballenciaga and others under the Kering umbrella, which have dropped fur from their collections as have prominent retailers such as Nieman Marcus, Saks Fifth Avenue and Canada Goose. Footwear brand Crocs, plans to be completely vegan by the end of 2021 and the City of Ann Arbor in Michigan is banning the sale of fur products throughout the city. Read more here.

The vegan beauty market is expected to reach $20 billion by 2026. While this generally means that the products don't contain ingredients from animals, it doesn't always exclude testing on animals and vice versa. Mexico is the latest of 41 countries which have banned animal testing of beauty products. L'Oreal is removing animal hair from it's makeup brushes. Read more about vegan and plant - based products at The Beet and check out some of their vegan recipes.

In keeping with Volvo' s quest to achieve a fully circular business model by 2040, it is the first car manufacturer to remove leather from its interiors. Starting with its newest all electric model, it will be using only bio -based materials. Other car makers such as BMW, AUDI and Volkswagen are also experimenting with animal -free components.

In the next week or two, we'll talk about Renewable Energy and the rise of Electric Vehicles, though we might briefly pause for Primates in between.