Me and My Umbrella in Hokkaido


During the Thanksgiving Holiday in Korea, I visited Hokkaido, Japan's northernmost island. This time it didn't just rain. There was a fullblown typhoon in progress which made going up the mountain in those crazy little cable cars a near death experience. Still the autumn colours were beautiful and there were great hot springs everywhere including in the little ryokan (family hotel) where I stayed. 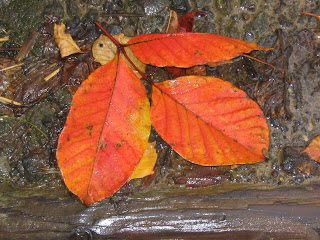 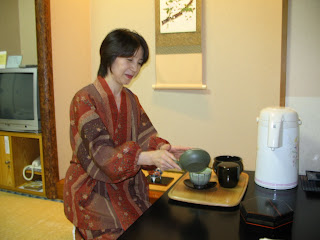 Tea Ceremony in the Ryokan 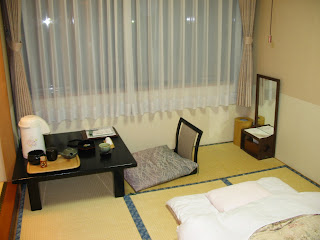 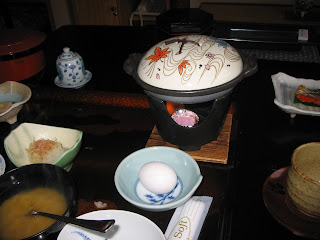 Some of the most famous are at Noribetsu which looks like Rosebery with a bit more autumn colour and volcanoes that are decidedly active. One of them is called Mt. Weather. Fishermen say that when it smokes they shouldn't go out in their boats. The day I was there it was positively belching and proved true to its word.

'They' also say Queenstown in Tasmania looks like hell with the fires out. Here in Hell Valley, it looks like Queenstown with the fires still burning. Above it, there are beautiful woods with little moss covered Buddhas and odes to various nature poets. Devils guard the hot springs and the livelihood of the town, where most of the shops stay open all night. Surprisingly, unlike Korea, you can buy camembert, fine wine and lavender here, which made me think even more of Tasmania.

Higher still, there is a bear park and an Ainu Village. Although it was sad to see the bears in their concrete enclosures, they had the most beautiful expressions. They actually looked delighted to be entertained by the humans since there obviously wasn't much else for them to do. 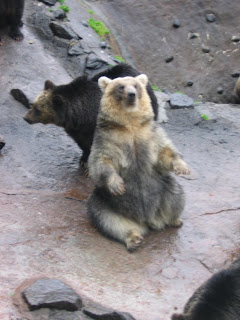 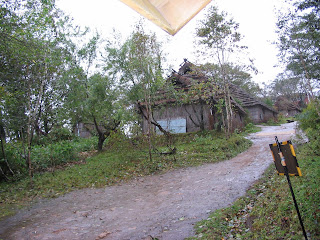 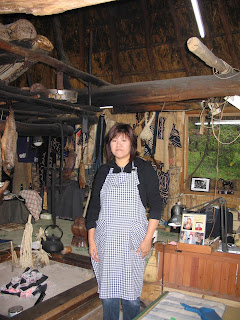 This young woman invited me in out of the freezing weather


The Ainu are Japan's aboriginal people and distantly related to both the Mongolians and the Koreans. Although they suffered discrimination in the past, they say that things are better for them now. They do the most exquisite wood carvings of animals. 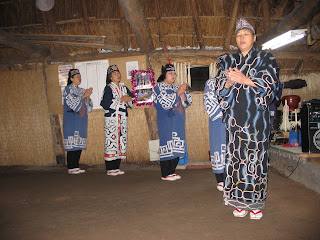 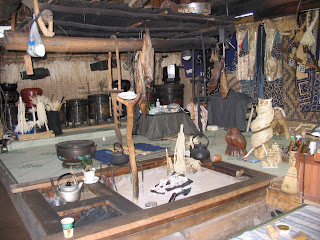 Inside an Ainu House

Here are some pictures of the thermal regions.This mountain only appeared in 1977 and wiped out the whole township of La Toya.Luckily, thanks to an amateur vulcanologist, no lives were lost and the town has since been rebuilt. 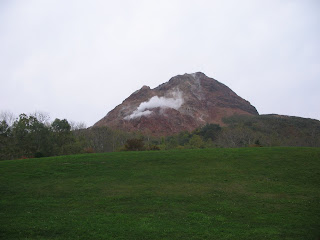 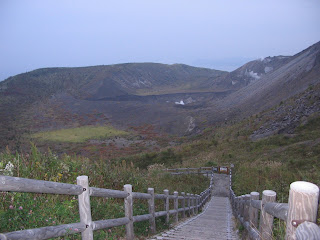 Looking down into one of the craters.
That's not cloud around the mountain.
It's smoke.

Despite strong anti Japanese sentiment in Korea, for past hostilities as well as current territorial claims, the Japanese people I met were all very charming and hospitable. One hotel owner went to a lot of trouble to organise a lift after another couple and I missed the last bus down the mountain. In another place a lovely girl called Mizue arranged for her Dad to take me to the hotel because the directions were too hard to explain.

Directions were a bit of a problem. Said couple and I formed a close relationship after we found ourselves on the same wrong bus for the third time. I also spent my last night in Japan sleeping in a hotel lobby because every single hotel was booked out. It was a public holiday there too and even the airport shuts up tight at 11 o'clock. This definitely beat spending the night outside in a typhoon. Another odd thing was being charged more for a single room than for a double. It is nice when you pay though. The entire family does a deep bow. I'm not sure whether this is in gratitude for staying or because you are finally leaving and your credit card didn't bounce.