The Overland Track is a 65 - 80 km walk over the roof of Tasmania. It is old news to most Tasmanians, especially the more masochistically inclined and has become so popular that you now have to book a place before you can walk it so that the 'wilderness' isn't loved to death. These days it costs $100 in addition to the normal Park fees and you need at least twenty six essential items of equipment plus what seems like your body weight in food. This is because quite a few people have lost their lives on this walk. Unexpected blizzards are possible, even in the middle of summer and there are the usual risks of getting lost, snake bite, twisted ankles, falls, hypothermia or dehydration. In good weather it usually takes from six to ten days. 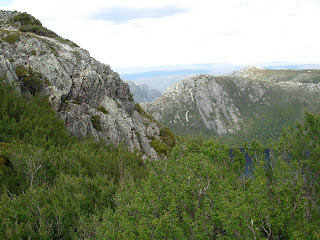 Round One. Struggling up to Marion's Lookout. Crater Lake, one of many glacially formed cirques, can just be seen far below. In one section you have to haul yourself up on a chain.

All I wanted to do for the first three days was to turn around and go home. This was made worse by the fact that the first leg included a climb of 1223 metres in 35oC heat. I drank all my water before I got halfway up and while trying to refill it at Crater Falls, my pack fell over and landed in the creek. Luckily almost everything stayed dry, even my boots, but that was pretty much the only water I saw for the rest of the day.
According to the track notes this was supposed to be a walk of ten km -as the crow flies I suspect -and should have taken between 3 and 5 hours but by dusk I had officially only gone 2.5 hours and still had one point five hours to go. I could have cried and would have gladly gone back to base were it not for the fact that I would have to go back down over the chain in the dark.There was no choice now but to press on to Waterfall Valley.
The storm predicted for four o'clock arrived around nine. There were storm clouds and rain on every mountain except the one I was on and I was dying of thirst. When I finally made it to the hut, it was pitch dark and there was no moon. It was then that I discovered that the only thing which had gotten wet was my torch. The last thing I remember is lying down on the bare wooden boards of the sleeping platform , absolutely determined to go home in the morning.
I woke up cold, hungry and wishing I had tested the sleeping bag. Usually they are far too big but this one, surprisingly light and rated minus 10oC proved to be a bit too short and a bit too narrow. At least my feet didn't hurt and I didn't have a single blister. In fact, I was amazed at how good I felt.
While I was cooking up my instant noodles, a chirpy volunteer warden came up and told me that I had already done the hardest part.The next part she assured me, was literally a walk in the park. Being a bit embarrassed to be heading home so soon, I thought I might go on to the next hut, spend a day or two there and then head home. Water was still a problem, but a young ranger (Angela?) gave me an empty metho bottle which worked perfectly well, though people did look at me a little strangely when they saw me taking swigs out of it.

The walk was pleasant enough, past several alpine tarns with the bulk of Barn Bluff as a backdrop. At Windemere Hut there were platforms for pitching tents, a big verandah, a wood stove, stainless cooking areas and tables, a water tank and wonder of wonders, a composting toilet. Although it's BYO everything else, the huts are a fantastic sight at the end of a hike, particularly, I imagine in the event of bad weather. During the night though, there was a great kerfuffle and an influx of campers. Possums had ripped open one of the tents and stolen someone's food. The possums here are enormous and so smart that they can undo zips and open packs and they know exactly where campers keep keep all the goodies. After that, everyone hung their packs from assorted nails on the roof. 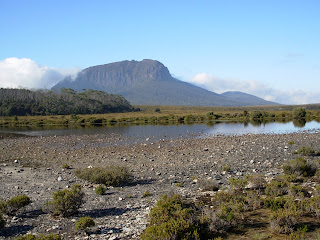 Mt. Pelion West. First time I have been game to stop and take the camera out.

The big breakthrough came when I made it to New Pelion Hut. Although it still took much longer than it was supposed to, this 16-75 km put me almost halfway. I started before first light, brushing away rainsoaked cobwebs. As I stumbled in late in the day, the peak baggers were already coming back from their 4-5 hour 'side trip' up nearby Mt. Oakleigh. 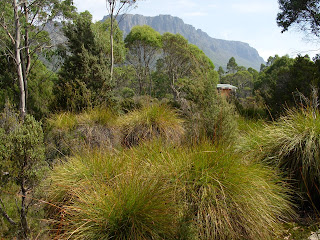 It was in this area that I first came across "the Others." They were a party of about six or eight (some were guides) and included two older women and a man who walked with the aid of two sticks. Just as I struggled to the top of a pass, they would sail past me, fresh as a daisy. After about the third friendly encounter, I asked them how they did it.
"Easy!" said the seventy five year old. "We only carry eight kilograms. Everything else is supplied. Freshly ground coffee, morning and afternoon tea, hot showers, real beds and three course gourmet dinners with a glass of wine in luxury huts."
Of course all this comes at a price. Around $2,450 per person. Towards the end one confessed that that secretly they all wished they could do it my way. To which I could only reply. "Secretly I wish I could do it your way."
After Pelion Pass the whole country opens up to display some of Tasmania's highest mountains and secret valleys filled with myrtle forests and waterfalls. Leatherwoods were blooming and there were some delightful swimming spots. Having conquered the longest part of the journey, I now felt ready to take on a few side trips, though not quite to the extent of the peak baggers racing up Mt. Ossa. 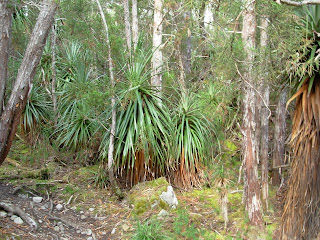 Every Tasmanian vegetation type can be seen on the Overland Track. This is Pandani 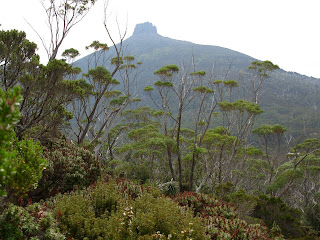 View of Mt. Pelion East from Mt. Doris. What's Mount Doris? It's the small mountain right next to Mt. Ossa. OK it's not as famous, but almost as big, much prettier and much easier to climb. Thanks to Pelion Ranger Paul Challen for suggesting it. Great views of the surrounding mountains too except for the smoke from bushfires in adjacent valleys. 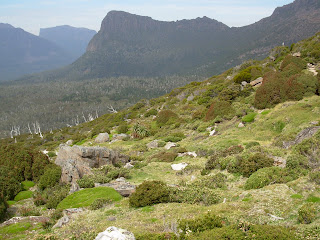 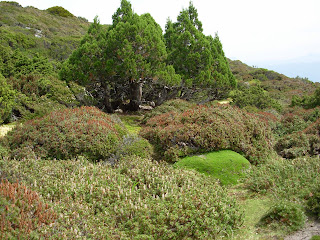 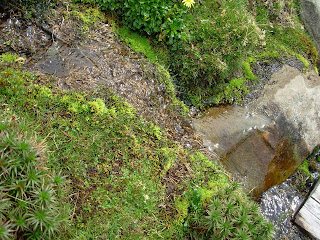 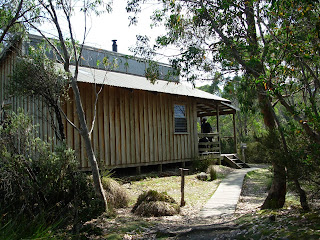 Kia Ora Hut tucked beneath Castle Crag has to be one of my favourites, the more so because you come upon it after a long dry walk through snake infested gullies and there it is with its cascades of little waterfalls and the best swimming hole yet, surrounded by rock on three sides with a sparkling six or seven foot waterfall tumbling over and moss covered trees all around. 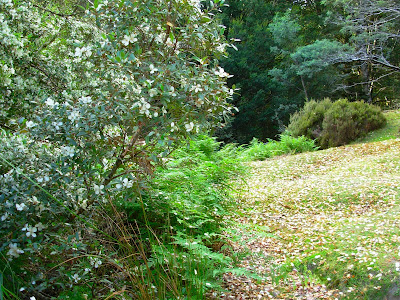 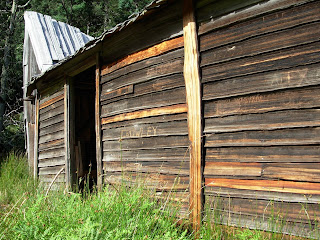 Historic Du Cane hut ( emergency use only) is in a lovely setting with the mountains above and myrtle forest all around. It was built in 1910 by snarer, miner and bushman, Paddy Hartnett. Hartnett Falls below, bear his name. 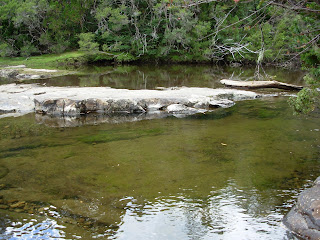 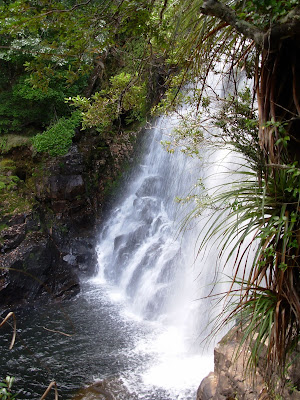 Fergusson Falls. One of several lovely waterfalls along the way.

From here on, most of the country was hungry looking dry sclerophyll forest, where every stick looked like a snake and you couldn't take your eyes off the track for a moment. Luckily most of the real snakes were just as scared and obligingly headed the other way. There were also occasional echidnas and wallabies, some pretty wild flowers and lots of birds. The currawongs were noisy and almost as good as the possums when it came to raiding packs. 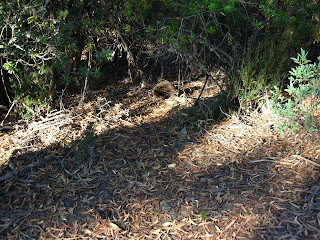 Can you find the echidna in this picture? If not, try double clicking on it. This works for most of the other pictures too.
By the sixth day, I must have become a little fitter, or else, having eaten or given away most of the food, my pack was considerably lighter. Either way, only the man from Yulan Coal who runs 40km a week with a pack on (and his equally fit wife), passed me before I reached the suspension bridge just before Lake St. Clair. Now it was my turn to sit back and watch everyone else trail in. Along the way you develop the kind of intimacy you do on long haul flights as you keep meeting each other in the huts, share food and listen to each other's triumphs and disasters, but now, as with long haul flights, everyone was hurrying away to other lives.
A resident ranger tried to convince me to walk another two days around the lake rather than take the ferry as most walkers do. I was tempted there for a moment but with huge storm clouds gathering overhead, I thought I should quit while I was ahead. I managed to leap aboard just as the storm hit. 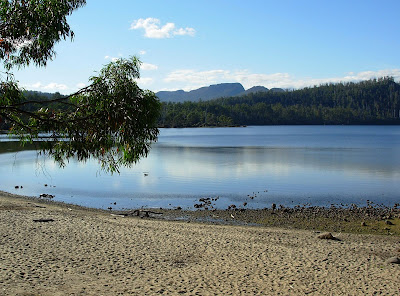 Lake St. Clair at the Southern end of the track. The aboriginal name for this huge lake, the deepest in Australia, is Leeawuleena which means "Sleeping Water." There is a new visitors' centre here with ferry trips, a bar and good coffee as well as several pretty walks. One of these walks is an Aboriginal Cultural Trail about the Big River People who lived in this area and were the last to give in to white settlers.

These parts of the Cradle Mountain Lake St. Clair National Park, and those like Barn Bluff and the summit of Cradle Mountain at the other end, would all make much more pleasant day trips I decided, without that growth on my back. Walking the Overland Track is not about pleasure, though it has its moments. It is about character building, endurance and being able to say that you have done it. Luckily there are plenty of places in Tassie where you can enjoy similarly beautiful scenery without having to spend six days in the wilderness.