Another Night, Another Airport 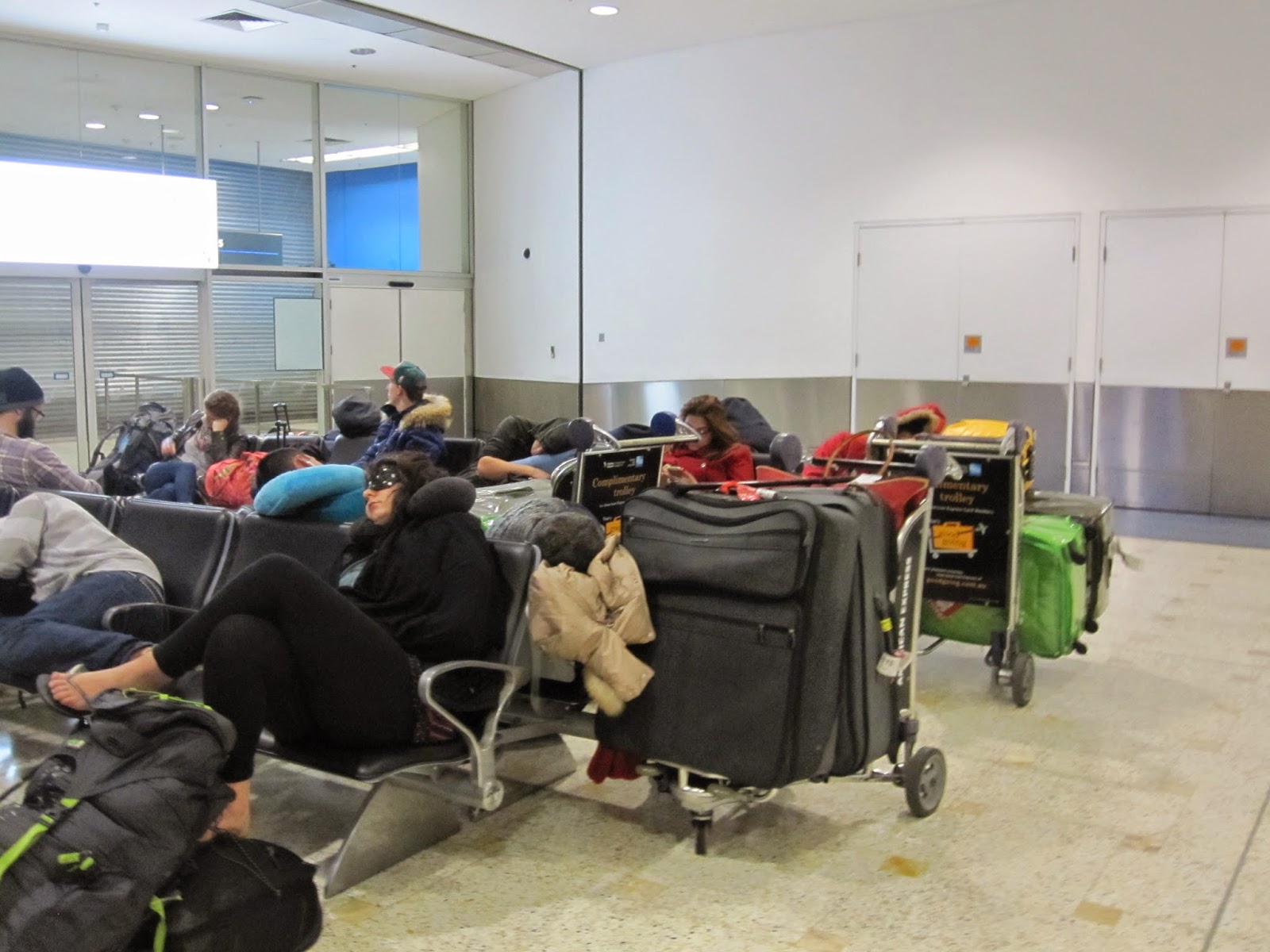 Not everything about travel is wonderful. Here we are spending a typical night in an airport after a long haul flight on those cleverly designed seats which prevent you from ever getting comfortable. I had several of those. This is the punishment for those who travel on the cheap.Then there are those interminable queues for check-in, for security, immigration, for luggage and customs and those myriad little things that get under your skin like unexpected exit taxes, the cost of those luggage trolleys, the price of a coffee and a stale roll, and the inevitable plane delays. As I drag my wheeled suitcase or trolley from place to place, I often wonder if I am getting to old for this gig.

Of course all that's forgotten once you come face to face with family and friends on the far side of the planet or you emerge in some new and exciting location. And what are a few hours of discomfort compared to the trials of travel in days gone by. Even in the fifties it took six weeks for us to come to Australia and it took our Dad ten years to pay off our trip. The possibility of returning for a visit belonged to the realms of fantasy and daydreams like winning Tattslotto. The tortures of air travel remind me of that German fairy tale Schlarraffenland where you have to eat your way through a mountain of cold semolina porridge before you come to the promised land where deep fried chickens fly into your mouth and only lay hard boiled eggs. The nearest equivalent in English has to be the Big Rock Candy Mountain, though I don't remember the entry requirements.

It's not as if I could afford to travel this year, but having lost two of my favourite uncles in the past twelve months, the big family reunion held every ten years, when all the far flung members of the family get together, seemed like a good chance to see everyone at once. This year was especially important because we were celebrating the 200th anniversary of one of our more famous ancestors.By deviously mixing all kinds of odd flights, I not only managed to get to Europe and back for much less than it would have cost otherwise, but also managed to visit a few other people and see some places I had always wanted to see. It wouldn't have worked either without help from my sister and a lot of others who provided accommodation, transport and food.
As well as meeting up with people who have remained steadfast friends despite the tyranny of distance, there were whole branches, especially those who emigrated to the U.S.A. whom I had never met before. It was amazing to see all the young people whom I'd met on other occasions, all grown up and with families of their own and now living in all sorts of interesting places - even in Oz for heaven's sake. We are certainly international with every continent represented. The other nice thing was that my daughter, her husband and their little girls had a chance to meet their very large extended family. We have always been very isolated in Australia and I always used wonder what it would be like to have cousins, uncles, aunts even grandparents on tap. One uncle/cousin who happened to have his own steam train, together with his lovely wife and several other members of the family, even put on a birthday party for the three little girls after hearing that they had missed theirs in transit.

The groan -ups had a good time too. It really was like Scharraffenland with enormous tables groaning with food every night and more cheesecake, pretzels and torten than we could possibly eat. The Aussie branch also appreciated the castle crawl because you  really get a sense of history, looking at all that armour and those enormous stone walls. Definitely the stuff of fairy tales. I also did  a castle crawl  of my own along the Rhine, since this was one of the things Mum and I planned to do together before she succumbed to cancer. I think she may have done a bicycle trip up the Rhine on her honeymoon. It is still very romantic. 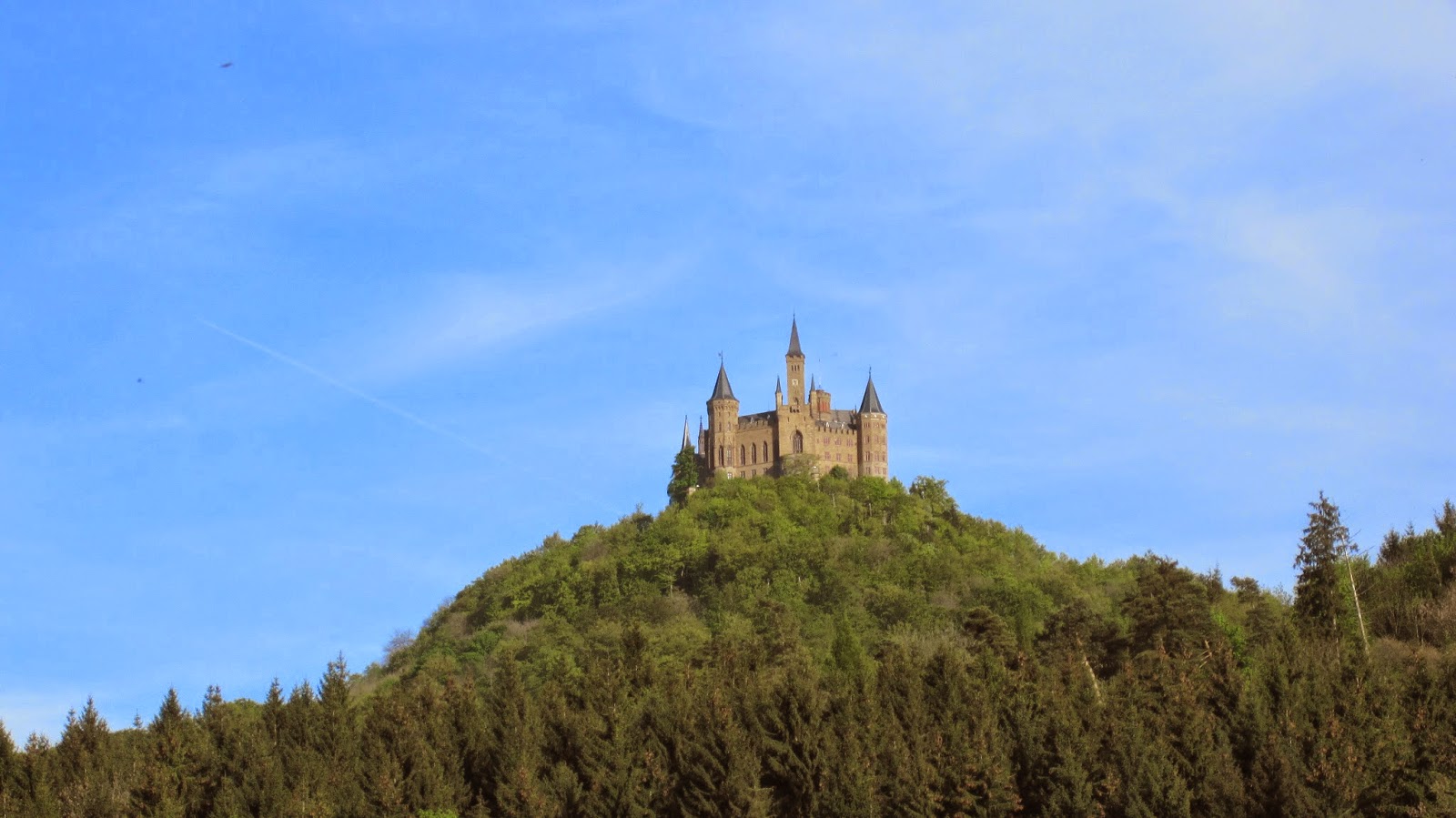 Hohenzollern in the Black Forest\


Unfortunately the weather was overcast most of the time, and I lost count of the number of castles I saw, but there was indeed a castle on every hill. The Rhine has historically been a major artery and a much contested space with some of the castles variously being occupied by the Romans, the Franks, the Swedes, the Spaniards and the Italians, not to mention robber barons and citizens protesting excessive taxation. Martin Luther also stayed in one of them while writing his ninety -five theses criticising the Catholic Church.
The Rhine is also home to the legendary Lorelei who lures fishermen onto the rocks as per Heinrich Heine's moving poem. Click here to get a glimpse of the Rhine and the Lorelei cliff.
The real surprise for me though was how much it was still being used as a thoroughfare, not just by tour boats and ferries, of which there were many, but by barges carrying scrap, coal and sand.