Austria, Through a Windscreen Darkly


We toured the Mondsee, the Titteesee and the Wolfgangsee in the Salzkammergut. The mighty Austrian Alps towered over everything  putting human endeavours such as houses and towns into modest perspective. The charming 900 year old UNESCO World Heritage village of Hallstatt above is a perfect example. The Chinese may have copied each building and even the statues with the same zeal that they copy Gucci handbags, but as yet, they have not been able to clone the mountains. While the Austrians aren't too thrilled,  and the legal ramifications are being looked at, they say that you cannot capture the essence of a place so easily. Indeed. the copy may work in their favour. Busloads of Chinese were in evidence to view the real thing while we were there.

Maypoles were in evidence in many towns ansd villages throughout Austria and Germany. It is a tradition dating back to the 16th Century. Believed to be a relic from pagan times to celebrate renewal, it is put up on the first of  May and usually displays the symbols of the various craft guilds in the village. Brass bands play and there is drinking and dancing. If you want to see how they put them up, click here. 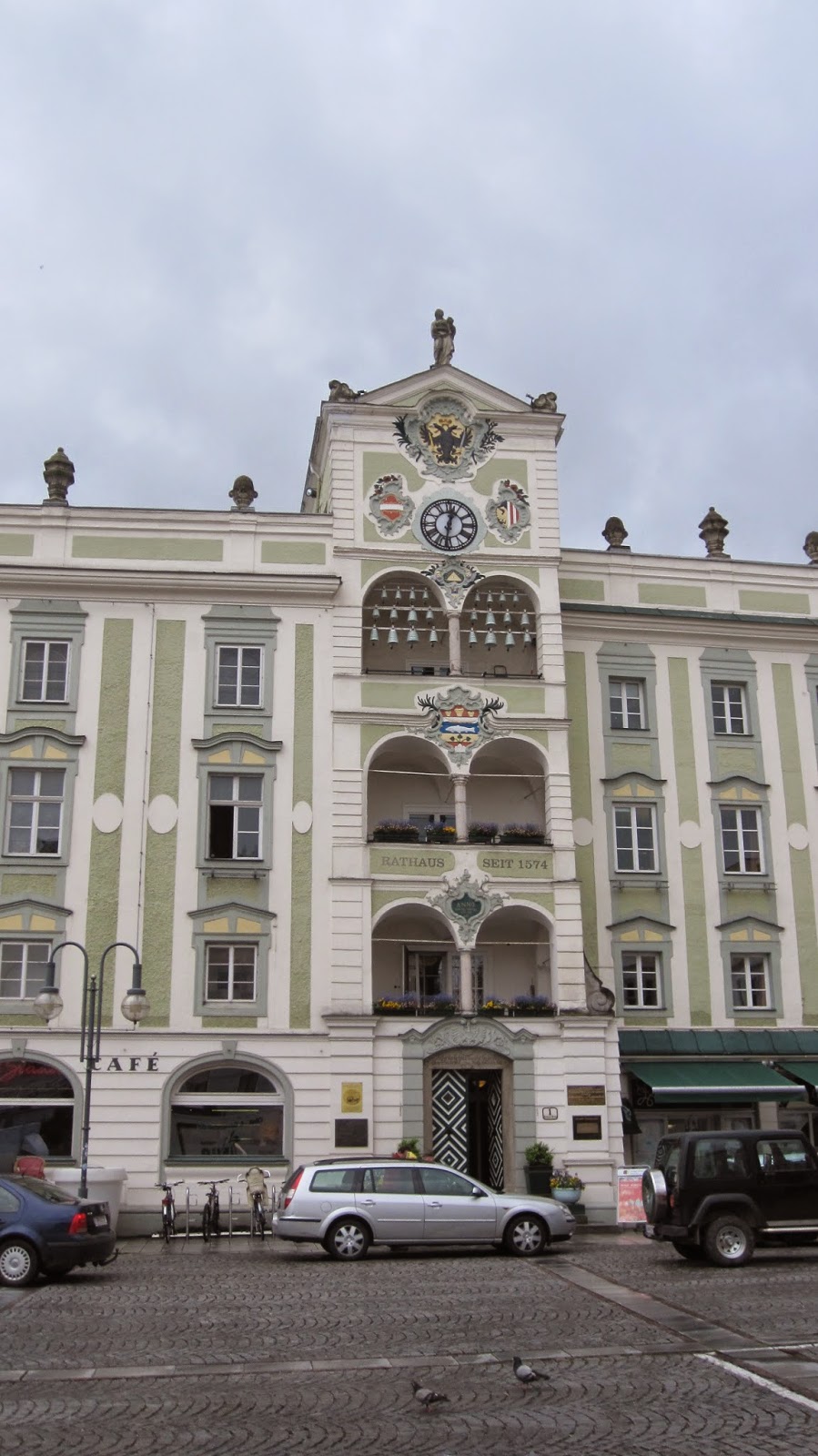 Town Hall in Gmunden
Stopped for coffee and cake - strawberry torte, in Gmunden, a larger town on the Traunsee overlooked by the Traunstein Mountain. It is a spa town and the centre of a ceramic industry in which my cousin (second or third cousin twice removed) used to work. The ornate Italianate buildings with their rich detail and wrought iron balconies are attributed to Princess Caroline of Austria who became queen of Naples and Sicily. As well as being the home of exiled royals of various nationalities, Gmunden is also the home of  bearded drag queen and Eurovision winner, Conchita Wurst. This contest was on while I was in Austria and being a somewhat conservative place the win was greeted with a mixture of embarrassment and national pride.

St. Wolfgang was the last place we visited. It  has some interesting stories and legends and picture postcard buildings. The church was founded in the 10th Century when St. Wolfgang  who had lived as a hermit for many years, threw his axe from the Falkenstein Rock and built it where the axe landed. The original White Horse Inn is here too, the subject of  a romatic comedy which was later turned into a musical. No, not the "Sound of Music" although this is  exactly that kind of country, even if a little melancholy today.
.