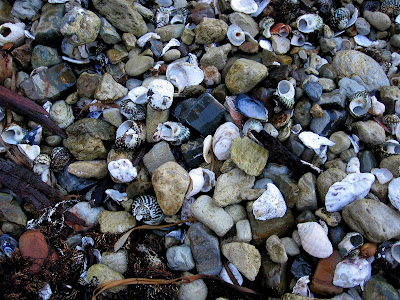 Were Tasmania not generously endowed with spectacular landforms, these two at  suburban Blackman’s Bay, only about 20 minutes from the city centre would be famous.

The first is the Blowhole, just off the Channel Highway along aptly named Blowhole Road.  It is almost as deep as the Devil's Kitchen on the Tasman Peninsula and locals say they have seen the spray spilling out of the top. There is ample parking and should you get tired of the churning and billowing, the cliffs nearby and the views across the bay are spectacular as well. Just don’t bring your dog. It is also a bird sanctuary.

Another natural wonder is only a little further on. Follow the coast road south to end of the beach and take the right hand fork.  After you have left all the houses behind and it looks like there can’t possibly be anything else, watch out for a small dirt road on your left called Fossil Cove Road.  The track starts at the rough parking area on the right hand side near the end of this road.This walk is supposed to take about thirty minutes but there are lots of stairs and you may want to spend a while on the little beach there. Watch out though that you don't get caught by the tide.

The mudstone here was laid down around 280 Million Years ago - sorry creationists, and further upheavals followed around 180 million years ago, when dolorite intruded producing the crazy columns and the riven coastline.

Hobart - well Greater Hobart, is full of surprises like this. Sometimes not even the locals know them. We had to ask several people before we found the road to Fossil Cove.


Blackman's Bay itself  is one of those terribly 'nice' suburbs with a lovely scalloped beach. The beach is clean with well laid out paths and seats. Genteel houses take advantage of sea views and their yards are neat. When I stop for  a cigarette, people stop to chat. Even their dogs are well behaved. Why do I get the distinct impression that there would be a public outcry if someone were to pass wind?