Along the Derwent to Bedlam Walls

Today I walked  about 7 kilometres from Montague Bay to Geilston Bay, and  then rock -hopped about another two along the shore beneath the Bedlam Walls, a cliff face which overlooks the Derwent.

After starting on the south side of the Bridge and going beneath its rumbling arches heavy with traffic, the track  meanders pleasantly to Lindisfarne  past  elegant houses jockeying  for water views and equally lovely gardens with beautiful flowering trees – even the street voted most attractive in 1985.  As with my beach walk a few days ago, this path was also popular with cyclists, joggers and dog walkers, though perhaps not as many as along the previous section. There were numerous seats and occasional sidetracks which gave onto little beaches. The latter must be fishing spots because they were mostly rocky and not all that pretty, but the birds were doing a bit of fishing there too.  Mums and Dads will also appreciate the several playgrounds along the way not to mention the free barbecues at Geilston Bay, which were also enjoying considerable patronage. 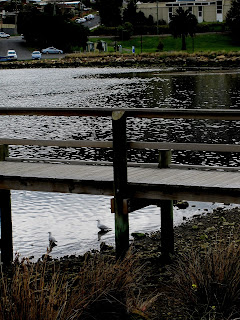 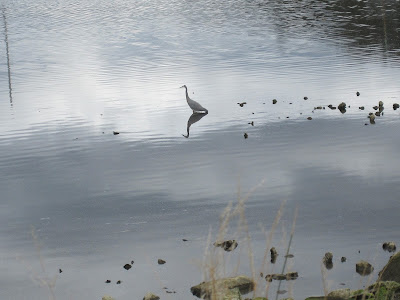 I am quite blasé now about the views of the city across the bay and the sight of so many yachts reflected in its waters. In a perverse Wabi Sabi – loving the imperfect, kind of way, I tried instead to  photograph  the industrial sprawl of the Zinc Works breathing smoke into a lowering sky like some enormous  fearsome  beast.

It was good walking weather – not too hot and certainly not as cold and rainy as it had been for the last couple of days, so I kept going on to Geilston Bay and then on up the pathway to towards Shag Bay.  This proved to be the most exciting part of the journey.


This area is particularly interesting both geologically and because the Aborigines obviously spent much time here, leaving behind  not only the usual shell middens but also a quarry and tools. Most importantly, there are several large caves there which were definitely used as shelters by them.

Unfortunately, the official  track is now closed, but I came there by way of the rock ledges below and was not aware of this fact. I am not sure if closure is due to some instability, or for cultural reasons.  If the former,  then I am a careful risk taker and did nothing which might jeopardise my own skin – always a hazard when you walk alone (and yes, son of mine I was carrying the EPIRB, in case you were going to ask). If the latter, then I apologise for the intrusion. The track notes say you enter at your own risk.

Even from a purely geological point of view these caves are amazing. According to one geological report I read, they were made by the sea, but now stand some thirty feet (10 metres) above it.
The return trip was a bit of an anti -climax but thankfully mostly downhill and uneventful, but for a very few wild flowers – another orchid, and the first of the butterfly irises which you can see below. I think I may have called them lilies in the previous post). You can imagine how pretty they would look when massed and in flower.