In the Footsteps of Charles Darwin - Sort of

I like a themed walk – it adds an extra dimension to just being out in the fresh air, so I was quite pleased to read about the Charles Darwin Walk on the Eastern Shore and the weather being co -operative, I hurried off to explore. What a true mission of discovery it turned out to be. The track commemorates Charles Darwin’s brief visit to Tasmania in 1836, where he noted the geology as well as the flora and fauna and had a lovely time  being entertained by the locals at “Secheron” in Battery Point. Charles must have been busy that year, because there is also a Charles Darwin Walk in NSW, which he also did in 1836.


Since Darwin had crossed by ferry to Bellerive,  I knew he had started there, but none of the many walkers I spoke to on the jetty had any idea about the walk. The map I had seen showed it running along the beach, so I set off in that direction and hadn’t gone more than a few steps before coming  across this track marker. 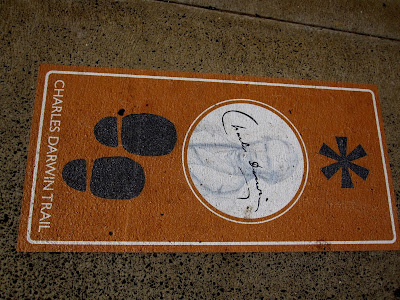 So far so good.  Unfortunately there were very few others. I walked the length of the coastal track to Howrah, passing by several locations that Darwin had noted. The Permian Mudstone from 175 million years ago at Kangaroo Bluff and the 240 million year old Triassic layering at Second Bluff,  which contained layers of mixed pebbles and fossils.  The latter puzzled him and he concluded that they may have been deposited by ice sheets. Though he noted this in his field notes he did not mention it publicly, since  the idea of glaciation did not gain traction until 1856. Later, his notes were used to substantiate the theory of continental drift.

Charles would have also had lovely views of the Derwent and Mount Wellington, though there would have been very few houses, and certainly not the easy sealed track which I followed. I on the other hand, encountered many MILFs pushing their prams, countless dog walkers, several cyclists and two charming young men of the Latter Day Saints incongruously dressed in suits,  who not only offered a very friendly greeting but ran after me for some distance to return my camera which I had left on a seat.

At the end of this track, which finishes at a Service Station on a major road, there were no further markers and no indication of where the inland section began, so I caught a mystery bus which mercifully brought me back to the white whale. I also stopped off at the Council Chambers and got a map.

Undeterred and suitably armed, I set off the next day to head uphill to begin the inland section through the Waverly Flora Park. This too, was easier said than done but I was glad that I had decided to do the uphill section first. I would not have wanted to do it after the nine or ten kilometres I had walked the day before. Again, none of the local people had heard of this trail and markers were few and far between.

After a couple of false starts, I found the Winifred Curtis Entrance to the Flora Park. This was named  after a botanist who had been a bit of a legend at the University of Tasmania, being the author of the still definitive guide to endemic plants The Student’s Flora of Tasmania and  in 1945, only the second woman  to be admitted to the faculty. Born in the UK in 1905, she remained very active in the field of botanical research until her death in 2005, at the age of 100. She also has a reserve named after her at Scamander on Tasmania’s East Coast.  How thrilled she would have been to see the early wild flowers, particularly the orchids.

This is a drier forest, not as immediately rich in species until you notice the burgeoning wild flowers. The soils are poor, there are few big trees and at the top it is all rocky outcrops. Again as I walked, I tried to picture what Charles Darwin might have seen. He would have noticed the sheoaks, a few white gums and the wattles. In February there may have been a sea of butterfly bushes which now look just like sags. He would have seen and heard strange birds and enjoyed occasional stunning glimpses over the bay.

He certainly noticed the rocks.He commented on the red siltstone now very visible in the historic quarry. I also found a fossil (and left it where it lay for others to find).  Fortunately I did not encounter any of his "flatworms, dung beetles or reptiles."

What he wouldn’t have seen are all the different tracks*. I tried and tried, taking a different one each time, but still found myself circling the aerial, the water tanks and the quarry at least three times, without coming upon the track which led to Howrah, the place where I had left off the day before. When I did find a new track on my last attempt, it led me around the back of this hill to somewhere overlooking the freeway to the airport. I then had a long walk back to Bellerive Village where I had left my car. Now it looks like I have to start again from the bottom at the other end. Obviously an adventure for another day.  I have however, seen a great deal more of Bellerive and Howrah so it was still a journey of discovery for me - something I always enjoy.  I was definitely born a hundred years too late. I also enjoyed talking to many of the local people whom I asked for directions, even though very few of them had heard of the track.

*Clarence Council has tried hard with this trail but has not been able to keep up with the vandals. Many of the markers in the forest section have been defaced.  There is also the assumption that one would be coming from the South, not the North as I did, so a few more markers on the footpaths at that end would be helpful to avoid those several false starts. My thanks to whoever put chalk arrows on the rocks in some places. Next time I will leave a trail of breadcrumbs.

** Plant id. kindly provided by Bob and Joy Coghlan of the Society for Growing Australian Plants
at September 20, 2015