Advance Australia Where –Should we keep Australia Day?

Most Australians celebrated Australia Day on the 26th of January. Traditionally this is a Public Holiday which ordinary Australians like to celebrate with a few beers and a barbie (BBQ) and perhaps a day at the beach. Usually there is an Honours List (good to see scientist, Emeritus Professor Alan Mackay -Sim being named Australian of the Year this year) and there are also Citizenship Ceremonies.

While this is mostly pretty harmless, it does offend the descendants of people who were not on the winning side on January 26, 1788, when the First Fleet landed in Botany Bay.  Many of our Indigenous people who make up  around  3% of the population today,  call it “Invasion Day” and see it as a day of mourning since this marked the beginning of their dispossession, annihilation and oppression.  For this reason many people are calling for the abolition of Australia Day, or at least holding it on another day. The argument goes like this:

Not all Aboriginal people feel this way. Alice Springs Councillor, Jacinta Napijinpa Price, writing in the Canberra Times says that there has been been enough mourning and that changing the date is a diversion which prevents people from seeing the real issues faced by Aboriginal people – violence – often from their own people, marginalisation, poor educational outcomes, shorter life expectancy and higher rates of incarceration.  While I agree with her in most respects, particularly in regard to looking to the future and not the past and not making us all feel guilty – most of Australia’s early arrivals were after all, not volunteers but were sent here as convicts, and those alive today had no part in it either and should not be blamed, in the same way that we cannot blame later generations of say German or Japanese origin, for atrocities their forebears may have committed during World War 11, I am wondering if there is a way to change its meaning to something positive.

It could for example be used to recognise Aboriginal Achievement and reflect on ways to alleviate present suffering, and to slowly heal the wounds between mainstream and Aboriginal culture.  A recent paper on Aboriginal retention in schools noted that self -esteem played a major role, so recognition of this kind may be one possible way to achieve this.  We do after all have 364 other days on which we could celebrate our diverse heritage and the positive things about Australia. Here the City of Fremantle  in Western Australia which has an interesting multicultural history, has led the way by having an all inclusive event which offends no one,  two days later.
On the other hand, Youth Radio Station Triple J has used the day to good effect by running an all -day appeal for AIME, a well-regarded mentoring program which encourages young Aboriginal people to remain in school and continue to further education. Oxfam also runs a program (see image below) which encourages Aboriginal women to become politically active, learn to liaise with government and become movers and shakers in their communities. Since Aboriginal society is heavily patriarchal, it is a step towards Aboriginal people being able to solve their own problems. 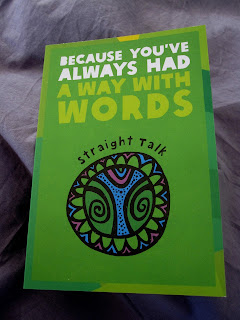 Another thing which could be done – and I believe this is in the pipeline, is to accord greater copyright protection with respect to traditional artwork and tribal knowledge to ensure not only acknowledgement, but a sense of pride and a greater flow of wealth to communities, especially at a time when pharmaceutical companies and textile manufacturers are beginning to show an interest.
No doubt there are many other positive initiatives, and violence in any form by any group should not be tolerated, but there is a way in which we can all help. It is to root out the covert racism which still pervades much of Australian society.  Just because outright discrimination is illegal, does not mean that it doesn’t exist. Greater awareness of Aboriginal culture and achievement will certainly help in that regard, though old attitudes, relics of the C18th “White Australia Policy” remain, especially in regional Australia and among those who have had little exposure to other cultures and ideas.
“Advance Australia Fair” says our National Anthem. Let’s make it so, regardless of how and when we celebrate Australia Day.


*On the subject of Australia day Honours, whenever we give them out, I would also like to see the 12 year old Hobart boy, Campbell Remess, who sews teddy bears for sick children get an award. His work is such an inspiration and embodies the true spirit of Australia.