Too bad it’s not a leap year this year.  I have just seen the place where I‘d like to spend my next honeymoon. I was treated to a surprise Alice in Wonderland Party there recently and had a thoroughly  enjoyable time, surrounded by an assortment of  white rabbits, fairies, Tweedle Dee and Tweedle Dum, a very sexy Knave of Hearts, a Mad Hatter and of course, Alice herself. I had no idea where we were going. I was only told to wear black – easy since that accounts for 80% of my wardrobe, given long black gloves and the hat shown in the New Year photos, then I was spirited away to become the Queen of Hearts in a place I had never heard of - strange, given that I thought I knew most places in Tasmania and especially around Hobart.
These accoutrements are not usually part of the normal arrangements, but the picnic baskets of food and the games of Croquet on the lawns are.  What made it magical, apart from this happy company, the good weather and the setting, was the sense that here someone had been able to translate their dreams into reality, down to the last detail and sparing no expense.

The Villa Howrah looks like a castle by the sea. We could have been in the south of France, somewhere on the Mediterranean or any other wonderfully romantic location. In countries where castles have been a feature of the backdrop for centuries, such a building would not attract a lot of attention, but in a small colonial outpost like Hobart, where, apart from its wonderful convict built buildings, most of the housing, though delightfully eclectic and charming, has traditionally been rather modest and utilitarian,  it is wonder to see. 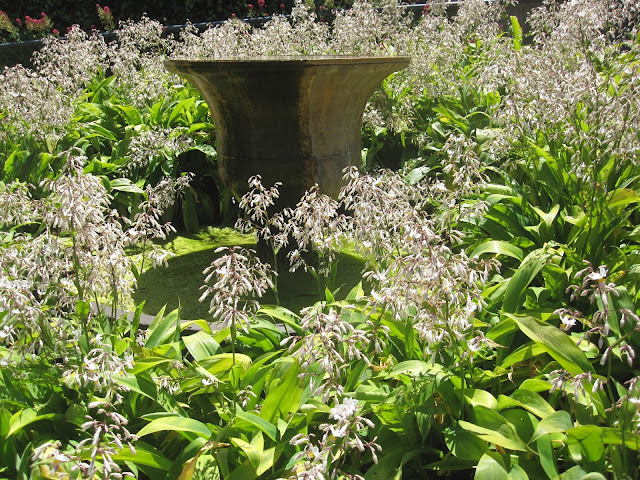 The views over the sea are to die for. The person who chose this site had both an eye for landscape and the big picture – grand visions (and deep pockets) as well as for the finer things such as fountains, a swimming pavillion, little niches, alcoves and arbours, high ceilings, a sunken lounge with an enormous fireplace and a quaint little library upstairs. I simply love the scale, the immaculate workmanship and the solidity of it all, as opposed to the more slapdash – “she’ll be right,” and impermanence of so much of our post WW11 architecture, especially that of recent decades, where expedience, cost cutting and uniformity – acres and acres of red brick triple front brick veneers or their modern more pretentious incarnation – the McMansion, have become the norm.

It made me wonder about its original owner and creator, reputedly a hairdresser from London, who conceived this vision splendid for what was probably a barren sheep paddock. There is an air of mystery about him as nothing else is known – not here anyway – not even his name, much less what inspired him to build something like this here. If anyone knows anything about him – it was a him, I’d be pleased to hear it.

Not that he is the only displaced soul to have reconstructed something he missed from ‘home, if that was indeed his intention. Supermarket King Rolf Vos, built himself an entire Swiss Village* in the north of the state, even moving mountains and creating a lake, as well as importing the tradespeople he needed to create exactly the look he craved, if minus the history that produced it. On a tiny island near Nubeena in the south, there is another castle built by Gunter Jaeger, a German of course, but this is not accessible to the public and in Sassafras, up north,there is another castle that has been a work in progress for at least the last forty years, though unfortunately I know nothing of its origins either.

So what is it with castles and importing bits of Europe into Tasmania, (though there are one or two elsewhere in the country)?  It does have the most European climate – cool, misty, rainy with lovely European trees that change their colours in autumn. This makes it very attractive to middle Europeans who bring their ideas, nostalgia and dreams with them.

It is also hilly and forested like much of Europe and its compact nature is also reminiscent of their original homeland.  While the heat of the mainland has spawned its own Australian styles  e.g. the sprawling bungalow with wide verandahs partially borrowed from the Mediterranean, or Queensland‘s unique stilt houses, at least partially influenced by Indian architecture, to allow breezes to leaven the humidity, are both suited to warmer climates and a sprawling landscape where land was cheaply available until a few generations ago. This was not so in Tasmania and especially Hobart where settlement was almost permanently constrained by hills until the evolution of modern earthworking technology. Here too, more expensive solid walls were needed to keep out the cold or keep in the heat,  so more compact forms of housing evolved, often involving more than one level, to take advantage of rising heat, though this is less true of post -colonial houses.
The concept of importing bits of Europe is a very well established tradition here too. Most of our stately homes  - Thank Goodness for all that cheap convict labour, had their plans (right down to the living rooms facing south towards the sun, but in our case towards Antarctica), and often their materials and furnishings imported directly from England to start with, so the odd castle or two does fit right in.  Unlike other states, Tasmania has not demolished many of its old buildings to bring in the new, the modern and the ugly – it was too poor, but now those self -same buildings give it its unique character and charm – a little piece of England/ Europe at the other end of the world.

While it still seems a bit strange – a denial of reality perhaps, to transplant architecture from another culture and or another era here, it is less out of place in Tasmania where the contrast is not so great. Mostly though I like it because it represents a bit of someone’s imagination turned into a thing of beauty in the real world  –  from castles in the air to a castle by the sea -something I always admire, be it in David Walsh’s MONA or this. It gives wings to the imagination, inspires other ways of looking at shelter and basically keeps things interesting. A little romance in a pragmatic place like this can't do any harm either. It is certainly excellent for forgetting every day cares.

PS: The food wasn't bad either, the service discreet, professional and friendly. The Villa Howrah serves High Tea about once a month and caters to private individuals and groups. If you have a couple of grand you might be able to stay overnight and take advantage of all the facilities. In winter some of the smaller rooms are available for about $300. I mention this only in case some of my ardent suitors aren't quite so flush

*What do you think about this idea of transplanting whole villages? China has done it with Hallstatt in Austria.  South Korea has one too – a perfect Swiss village in the mountains at Muju
Email Post
Labels: Architecture Australia Places Tasmania Villa Howrah