The weather is fine and the hills beckon, but I am stuck indoors sifting through past lives -mine and my children’s, and even that of the previous generation.


My youngest son, having given up his flat in preparation for a move has brought three rooms worth of goods down to my little house and we have now have to sort through them. Two households into one simply won’t go and worse than that, I am being reunited with things that I thought I had managed to pass on years ago – old furniture, kitchen tack, books and bits. Usually I am the leavee with new adventures to pursue and have never had the slightest regret or thought about having to leave behind a few worldly goods. Not so this time.

Easiest to deal with is the impersonal but useful stuff – kitchenware, tools and such, to which little emotional baggage is attached, though it is rather sobering to see some chain store bought items now being advertised as ‘vintage.’ It made me think of those elegant chrome toasters and cruet sets in antique stores and having flashbacks of stuffy 50s boarding houses with their strict rules and ennui, before the country became multicultural. No regrets there. We tackle those first. This son is not a hoarder by nature- he longs to get back to those days when all he owned was a daypack and a surfboard. He just happened to be the only one with a fixed abode when everyone else moved on. 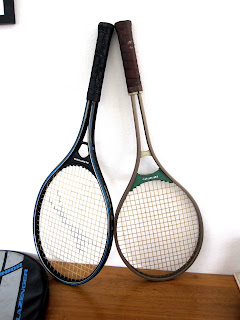 Much harder are those things which relate to my children’s childhood and teenage years – the comics, the now historic, once eagerly awaited issues of “PC User,” “Mad Magazine,” or “New Scientist” – the hobbies tried and given up – tennis, boating, fishing, diving; the Casio keyboard on which my sons first learned to code, the floppy discs, tapes, vinyl records and CDs of bands once loved, but now forgotten; the Lone Scout uniform which youngest son wore so proudly about two decades ago.  The books are particularly hard - the deluxe version of “The Hitchhiker’s Guide to the Galaxy,” David Eddings’ especially “Belgarath the Sorcerer,” Stephen Beisty’s “Incredible Cross -Sections.”  Some relate to abandoned hopes and dreams – art, archaeology, architecture, insects… and so on through the alphabet. Each handled object evokes a memory of some kind and I feel little bits of our lives slipping away as I put each one into a box. My life passes in review. I have put my Self Improvement books to rest with these, but as I put them on the discard pile, I can’t resist a final read - perhaps I missed something last time? This makes the process take much longer than it should.  This time no one has collected any of the free books which we put out in front of the house. It must be a sign of changing times. Rents in this area have gone up a lot. Gen X and Y gather no moss. I sneak a few books back on the shelves. Gifts are particularly hard too, especially when the donor is no longer around. 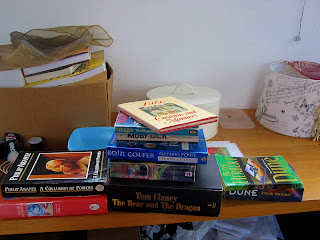 Another wave of nostalgia hits me when I unpack my father’s precious camera bag -such beautiful pieces of redundant technology. What love and labour went into acquiring and using them and how many months of hard earned salary, all unnecessary now, in these days of “Point and Click” when everyone is a photographer. Now they will go for a snip, at best to some collector perhaps who might appreciate their condition and fine workmanship. I feel a kind of mourning as I let go of these things, not just for him, but the thousands who laboured in producing them and the incremental change that made them obsolete. There is just no room for the past in modern houses - no attics, no cellars, not even a decent shed. I love the way that say, Korea and Russia have specialist museums for such items – typewriters, bicycles, paper… – Hungary too, for that matter, which gives them a place of honour somewhere, rather than languishing in some box, or even the rubbish tip, and wonder too, if we have not lost something very important, not to mention the skills required to produce and maintain them. Some of them could come in handy should the digital universe fall over. Maybe in my next life, when I'm more settled, I should start a photographic museum. I already have a few pieces of my own to add.

It feels like a long journey but in the end we have a few treasures, a lot of memories, a  few things to sell and a lot of boxes to take to the charity shops.  I see the ATO is targeting people who sell things on line. How dare they? Do they have any idea what this stuff cost to buy? Maybe their sale will constitute a tax loss and I’ll be able to send them a bill, if we actually sell anything, that is.

*Traditionally Tasmanians have never thrown things away. Given the separation from both the mainland and the rest of the world, they were too hard to come by and expensive even if made here. It is downsizing and relocation which have forced change, making it an excellent place for antiques.

I'm starting to feel like one myself - 'vintage' at least. I hope I'll soon be posting pictures of beautiful scenery, waterfalls and lakes again, but this is just to let you know I haven't fallen off a cliff.