At the Douglas Apsley National Park

The Douglas Apsley National Park* declared in 1989 is the largest remaining tract of dry sclerophyll forest  on the East Coast. While not as lush looking as the rainforests are -though there are some pockets of this within the park too, it does in fact support a greater range of species, including many mammals, more species of birds, reptiles, rare native fish, bats and amphibians, not to mention several types of endemic plants and invertebrates such as velvet worms. It also has some interesting natural features such as the gorge, dolerite cliffs, the waterhole and two waterfalls. 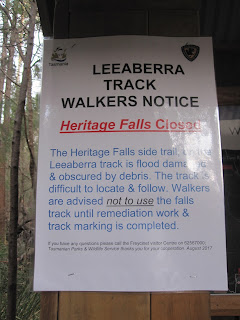 At first I am a bit disappointed that the surrounding countryside is so sparse and dry and that the waterfalls I have come to see are not accessible at present due to washouts and deterioration of the track. The three day Leeabara Track  (named after the Aboriginal word for the Douglas River) can only be traversed from North to South to prevent the risk of spreading Phytophthora cinnamoni, the fungal disease (not the kind I am looking for) which causes root rot, spreading to other parts of the park. It also requires camping equipment which I haven’t brought, plus GPS and detailed maps, so that one’s out too.

That leaves the Gorge Walk – 2-3 hour return, unless you want to walk back via the base of the gorge – also not recommended, especially if unsteady on your feet or after rain, in which case it will take around 5 hours. I propose to wait and see what it looks like when I get there and start very early in the day. Unlike Freycinet which attracts loads of visitors, this Park is not busy. There is only one car here when I set off and it’s still there when I get back.

After I have rock -hopped across the river, the walk goes steeply uphill for three quarters of the way, then drops abruptly into the Gorge. As I walked I faintly hoped that it might be a Gorge like Palm Valley in the desert of central Australia, lush with palms or ferns, but it wasn’t.  The vegetation was a little denser and richer on the South side with a few shrubs trying to flower – a guinea flower or two, some red mountain berries – don’t get excited foragers -they have the texture of polystyrene and less flavour, early dogwoods and a few sprays of wattle, but mostly the vegetation was sparse and struggling. The tall trees are mostly Eucalypts of which the park boasts 14 species, and possibly a Blackwood or two. She -oaks, a few wattles, dogwoods and native cherry dominate the understorey and the forest floor is littered with bark and fallen trees.

A few wallabies clatter away noisily and hidden birds sing. To me this terrain looks harsh and hungry, but conservation is not always about pretty or cute and furry, whatever humans may think. I’m also only seeing a very small part of a 25Km Park. The bush is pregnant with possibility, just waiting for the magic touch of rain.

The Apsley Gorge itself is also different to those in the West which have been neatly carved by glaciers. Here the rocks are rounder and more random suggesting that this one has been cut by a mighty river surging through at times when Tasmania was warmer and wetter.  Very likely it follows those areas already weakened by the rifting and tearing as it separated from the mainland or Gondwana. That’s the trouble with learning a bit about Geomorphology. You can never look at a landscape in quite the same way again. Instead of seeing a charming valley, or an imposing mountain, you wonder how it got there. You see discontinuities, evidence of change, past eruptions, ice ages, folding, and faulting and the relentless processes of erosion, the effects of water dripping on stone. Most of all you become aware of impermanence and the passage of eons of time.

I decide not to tackle the base of the gorge route. The boulders you are supposed to rock hop are bigger than I am. As if I needed convincing, it also starts to drizzle a bit, making the rocks slipperier and more difficult to negotiate. It stops again when I  reach the top of the hill. Back down at the river crossing I’m surprised to meet three French girls. Douglas Apsley seems a long way from the usual tourist beat. The spirit of Baudin lives on. This is a quintessentially Australian landscape very much what the early Europeans would have encountered when they first came to these shores. Now most of it has been given over to grazing or forestry, making it all the more important to preserve some of it.

Tiny birds flit and twitter around the waterhole where I sit for a while before the last climb to the car. The waterhole feels ancient. How welcome this pool of fresh water must have been in a place which receives the lowest and least reliable rainfall in Tasmania.  I imagine dark skinned men standing here silently with their spears waiting for game, or picaninnies playing in the shallows.  A green parrot flaps past. Its noisy screech startles me back to the present.  Another wallaby bounds away. I’m sure there are snakes here in summer enjoying those nicely warmed stones and the convenient food supply. It’s time to pick up my pack again. Time to go.

* You do need a Parks Pass to enter here.