On Top of Knocklofty – The Artist's Way


I have been running in my new walking boots on the hills around Hobart.  Knocklofty is the one nearest to me and overlooks the town rather nicely. Were it not for the great bulk of Mt. Wellington/Kunanyi (1271 m) stealing the limelight, it would be an important feature in its own right. The upside is that it is easily accessible and offers pleasant views of the river and the city from a less Godlike perspective – you can make out the detail of individual houses, a gorgeously flowering magnolia, a man on a bicycle, as well as the blue ribbon of river curling away to the south.

In the earliest years of white settlement in 1804 it was known as “Woodman’s Hill” and was a kind of wild commons where people gathered firewood, hunted possums and grazed a few cattle.  Much of the sandstone for the colony’s early buildings and even those in Melbourne was also cut from here. In 1942 -43 some 140 hectares were set aside for the people of Hobart as a recreational reserve. The few dwellings in it were either lost to bush fires or allowed to decay and over the years both schoolchildren and Bushcare Group, Friends of Knocklofty have restored much of the original vegetation. Today it boasts over 300 native plants and is a popular place to exercise, walk the dog or simply to enjoy rambling and scrambling over its many tracks and trails.

My latest walk has taken me in the footsteps of John Glover (1767 - 1849), a C19th landscape artist already well established in Britain, who came to Tasmania in 1820 at the age of 64 to join his three sons. It is said that he walked from his home in Melville Street with his easel, brushes and paints to paint the scene which now hangs in the Henry Hunter Gallery at the Tasmanian Museum and Art Gallery. It would have been a long steep climb up Poet’s Road if it existed then. The route he took as he walked up the valley from there is now called the John Glover Track.

He was very taken with the strange new vegetation and eagerly sought to capture it on canvas, without making it look like the English countryside. He is now regarded as the father of Australian landscape painting and was also one of the first to paint Aboriginal people.

In Glover’s day, the valley would have rung with the sound of the quarrymen wielding their mallets and chisels and the clatter of their drays as they took sandstone blocks to Hobart Town, but today I am accompanied by the sound of birds – Knocklofty has around seventy five species including the endangered Swift Parrot and some of the biggest crows I have ever seen. Though I am overtaken by the occasional runner or dog walker, the glen through which I pass is peaceful, greener and more sheltered than much of Knocklofty. The occasional golden splash of wattle and a few early wild flowers are a bonus.

If you would like to see more of Glover’s work, one of his sketch books is currently on display as part of the Museum’s “Strange Trees” exhibition which runs until 26/11/2017. One of his "Patterdale" works hangs in the history room at the State Library. Others can be found in State and National galleries and even in the Louvre. "Patterdale" was the name of John Glover's farm in the Northern Midlands and he is buried nearby at the Deddington Cemetery.

Funnily enough while looking for a bottle of wine to take to a gathering, I came across this one, dedicated to Glover. It not only has his portrait, but a little description of the man. 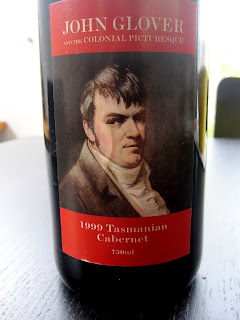 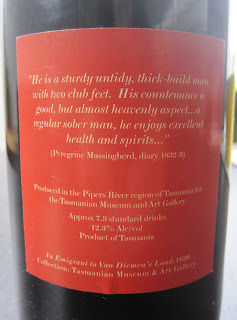 "He is a sturdy, untidy thick-build man with two club feet. His countenance a good but almost heavenly aspect - a sober man, he enjoys excellent health and spirits..."

-Peregrine Massingberd, diary 1832 -3
I like him already, but yes, he must have had a robust constitution, these hills are killing me.
at September 29, 2017