Kermandie Falls and other challenges


Oh dear. Another porridge day. Winter isn’t over yet. Yesterday my walking buddy phoned to ask if I wanted to go to Cathedral Rock. I looked at the weather app. Cloudy today with rain for the rest of the week, so today was the day if we were going to do anything at all. However, remembering my last three and a half hour uphill slog to Cathedral Rock, I emphatically declined and texted back
“Been there, done that!”
“Hartz Peak then?” he offered hopefully. He is one of those masochistic souls who thinks it’s fun to climb uphill over exposed boulders and scree slopes for half a day in the hope of catching a beautiful view, weather permitting. There weren’t going to be any orchids there either.
“How about Kermandie Falls?” I countered. “They might have finished logging there by now.”

The sun shone when we left home. Wattles and fruit trees bloomed gloriously on the way down. In Geeveston we called in at Forestry again to check on the status of the logging, got directions and the key to the gate (thanks again, Cathy). This was the same gate we’d walked through some weeks earlier when we walked about six kilometres without finding any sign of these falls. A few snowflakes swirled around me as I fumbled with the key to undo the gate, but they disappeared again as we drove deeper into the forest.  At least this time we were driving most of the way, not walking, so we concluded that this shouldn’t take us more than an hour or so. We even planned on doing another walk afterwards if the weather improved.

Between this and my last bushwalk, I had also gone to some lengths to waterproof my gear. I picked up some useful hints from that 1998 Bushwalker Magazine I found at the Blood Bank. First wash well – sometimes just washing restores some of the original finish, then spray with a couple of coats of silicon. I did both and still everything leaked like a sieve – my boots, my raincoat and my pack – so that didn’t help. I’m not sure how far we got up this road last time, but if we had seen what followed we would certainly have turned back as it didn’t look like it had been used since the days of stays and bustles.  The early part was covered in fallen branches and further down it was covered in moss.

Then we came to a place which Cathy had mentioned, where the road was blocked by a barrier of large stones beyond which the car could not go. The reason soon became obvious. An enormous hole had opened up and swallowed the entire road, leaving only the narrowest rim on which we could squeeze past on foot.  We kept walking until we came to a fork in the road. Both ways looked unused. We walked a little way down the right fork hoping to pick up a track and when that failed, we walked a little way up the left. Mercifully not far in we came upon a sign in the undergrowth which, under a light cover of lichen and slime said “Kermandie Falls.”  With a sigh of relief we trotted off in that direction.There was no sign of any orchids and only the occasional fungus, suggesting that the season was much later here.

It was uphill but easy going at first, then a sign pointed the way into the scrub. This was another scramble along an overgrown track among ferns, rocks and fallen trees. Fortunately there were ribbons to show the way and we eventually found ourselves at the main fall, with a few minor ones seen and heard along the way. This YouTube Video by gson82 captures the sound and the fury and even the rain. It stayed dry for a few moments until we took out the thermos, then it started to rain again. By the time we got back to the gate, this had turned to flurries of snow and my fingers were so cold it took me twenty minutes to undo the lock (Yes, boys it was harder than cracking the Masterlock – something we once spent a whole Family New Year doing).  I would have left it there and then, even if it meant losing our deposit, if we weren’t trapped on the wrong side of that boom gate.  There was nothing for it but to keep trying. I almost ruined my nail polish.

It's not that I necessarily want a four lane highway to these falls. I think what makes me sad is that I can imagine that once couples and families would have done this on a sunny Sunday afternoon and had picnics and such. There is the sense of losing things that were once well known and well used. The good news is that one of the falls lost to a landslip years ago, Keogh's Falls, has now been re -opened, but there is another fall like this - Rueben's Falls, which appears in my old walking books, which still remains 'lost."

Back in Geeveston the sky was blue again. Our mood changes as quickly as the weather. We decide to try for Keogh’s Falls after all, while still in the area. The Arve Forest Reserve is a long way from Hobart. We only got as far as Keogh’s Creek Forest Walk.  Before we had even finished that small circuit, the sky grew dark again and the snowflakes started falling hard and fast. This time it was a fullblown snowstorm and we feared the road would close if we didn’t get out quickly. Once again I was miserable, wet and cold but very glad that we hadn’t attempted Hartz Peak. Back in Geeveston, the road was clear again and the storm was reduced to large raindrops.  It’s only a difference of about 20 Kilometres, but much closer to the sea and sea level. I can see why the city fathers chose this site. The mountains also shelter it from all sides. We enjoyed a five star coffee at “The Bears went over the Mountain” -the only place that seemed to be open at this time of the year. The welcoming fire was a bonus.

If you are wondering why after all these rather soggy adventures I have not yet bought myself a nifty Gortex jacket, it is because apart from the expense, I have yet to find one that accommodates an ample bosom, especially when padded out with a pullover or two. I have tried on the men’s sizes too, but when you get one that fits across the chest, the shoulders are too wide and it looks like a dress. While there is something to be said for a full body waterproof jacket, it does make it more difficult to climb over logs. Nor I am I the only one with this problem.

"We are all non - standard, " says my walking buddy who is extra tall and can't get anything to fit either, especially shoes.  Given that we are all individual - see Buzzfeed for more examples, I have a suggestion for Google or any other forward looking enterprise, forget the driverless car for a moment – can drive – adapt those full body scanners at airports and link them to an inexpensive clothing manufacturer somewhere. Not everyone drives a car, but nearly everyone wears clothes, so do us all a favour and build the app that lets you chose the style and fabric and please hurry. I need something before my next walk. 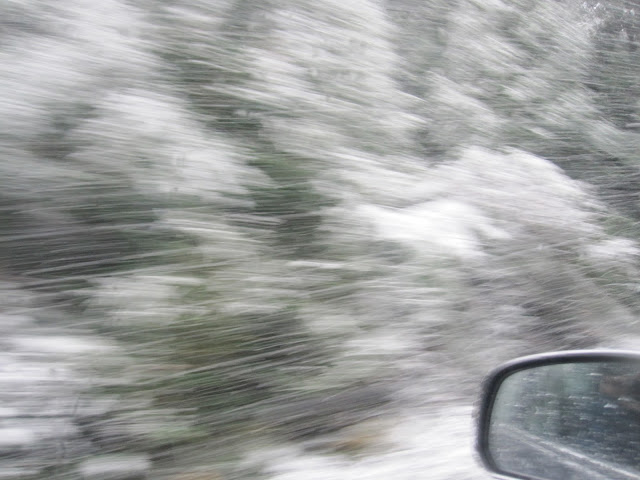