It had been excellent weather for both ferns and waterfalls lately, so last weekend I set off  in search of Rueben’s Falls. The directions were in an old walking book I had but they had thus far eluded me.  They lie in dense logging country somewhere to the south of Judbury. My previous enquiries at usually helpful Forestry Offices had yielded only a tight -lipped  "That road‘s been closed for years.” Something to do with an unresolved landslip apparently.

I was very surprised therefore to see several reports of recent visits on the Waterfalls of Tasmania site and thought it was time to have another look. Since it was the weekend, there was no point in consulting the forestry office. The original road was still closed but when I arrived at Tahune Airwalk where it ends, a young man closing the visitor's centre told me he had recently been there on a training exercise and gave me an excellent mud map of how to find the track.  Despite this, I spent the rest of the day driving around on forestry roads that weren’t signposted and usually not marked on any standard map. None of these roads were sealed, most were quite narrow with many rough spots and one or two steep and greasy sections which necessitated great care.

For all that, there was more traffic than I had anticipated. I passed young men having a beer amid a huddle of utes  and 4 X 4s. I also saw several burnt out cars (now I know where cars go to die) and I saw one young woman standing by while a tow truck loaded up hers.  I didn’t dare cut corners or try to avoid too many potholes because the prospect of encountering another driver who also thought he/ she was Robinson Crusoe could not be discounted, nor could the possibility - even on a weekend, of meeting a fully laden log truck.

At last I arrived at the road which I assumed to be the correct one, only to find a locked gate. The gate was rusty and didn’t look like it had been used in a very long time. There was no mention of it in the notes from the young man.They said, “The track to the falls starts at the end of the road. “ Did he mean here or somewhere else? Was I in fact on the right road?  It was now just after four, the shadows were getting long and I didn’t want to find out that I wasn’t in the dark, so I made myself a coffee, ate a tin of beans and some fruit salad (sequentially, not together) which were still in the van’s modest pantry and then hunkered down for the night, faintly hoping that perhaps by morning a magic fairy would arrive with a key. This was not to be. Morning dawned grey and cold - so cold that I started walking just to keep warm.


The gravel road - not too bad this time, meandered gently uphill and down, past pretty gullies and gushing creeks, over bridges and past new plantations. It also passed by several other roads and promising looking tracks. Although some of these had flagging tape, they ended up going nowhere. After about two hours, I came to a T- junction with a major road which, by dead reckoning had to be the other part of the original one which had been closed off. This meant that the falls were now at least another ten km away - not impossible, but not especially tempting given that it would make around 26 km all up -not exactly the sort of pleasant country ramble which I had had in mind.


Such are the pitfalls which await the wild waterfall hunter. True, probably nothing a good Tasmap, a good GPS or even a chat with Forestry couldn’t fix, but from the comments by previous waterfall baggers, it didn’t sound as if it was going to be that difficult.
While Rueben’s Falls must remain a mystery for another day, it was a lovely walk and gave me a chance to get more acquainted with many of Tasmania’s lovely ferns without even leaving the road. As well as now knowing exactly where to go next time, my recently acquired and extensive knowledge of forestry roads also enabled me to guide another couple out who’d become lost while trying to find the way to Geeveston. 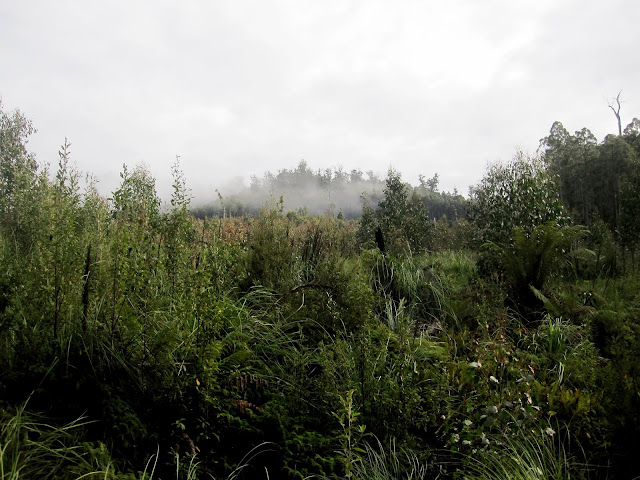 PS You don't have to go to such lengths to see ferns in their natural habitat.  Within 10 km of Hobart  for instance, there is Mt. Wellington and Ferntree. Launceston has Notley Fern Gorge within half an hour or Lilydale Falls - same distance, but to the North East. Burnie has Fernglade Reserve only five km from the city centre. Then there is Cradle Mountain and almost everywhere on the West Coast, especially around Nelson Falls*  which is 40 km on the Hobart side of Queenstown. Heading North from there, just driving over Mt. Black between Rosebery and Tullah, or driving the scenic route to Wynyard or Somerset via the Hellyer Gorge would delight any fern lover without even having to leave the car, though the picnic area at the Hellyer Gorge would be a good place to do so.

*Needs a Parks Pass, but is very informative if you are interested in ferns