A Failed Whale Mission, but Good News for Whales

It was beautiful weather here on Sunday, so off I went for a spot of whale viewing. Between April and June is the time of the year when large numbers of whales – particularly Humpbacked Whales and Southern Right Whales, pass by this region on their way to the tropics to breed.  Alas, I didn’t have much luck, but the next night on the news, they said that over a thousand Humpback Whales had been seen off the East Coast of Tasmania. It’s estimated that in total there are now around 35,000 of them again, which is excellent news because thirty years ago their numbers had fallen to just over 100 individuals.
This represents a great win not just for the Whales but also for conservation efforts. Hunting of Humpback Whales stopped in 1963 after catches had declined worldwide and in 1965 they were formally protected. The creation of marine reserves around their breeding grounds has also helped.

Between January and June, these magnificent creatures up to 18 metres long and weighing around 40 tons, travel around 5000 kilometres from Antarctica to the warm waters around The Great Barrier Reef.  After calving, they return to Antarctica again between October and November taking their youngsters with them. Learn more about our Whales here.

Humpbacks aren’t the only success story. The other baleen whale (no teeth and feeding only on krill) often seen in these waters  and almost as large, the Southern Right Whale, was also almost hunted to extinction and is now making a recovery moving from the ICUN ‘s Red List from vulnerable to “ least concern. “ Unfortunately not all whales have shown such splendid signs of recovery. The Blue Whale, - the world's largest mammal is slowly returning but still only at 2% of its pre -whaling numbers and remains on the endangered list, as is a sub -population of South Pacific Humpbacks. For many others, there is simply insufficient data.  Whales of all kinds are also at risk from things like propeller damage, “scientific whaling,” pollution - especially plastic pollution, ropes and fishing tackle, ocean noise, excessive tourism and climate change.  The biggest risk for juveniles which take over a year to mature, are predators such as killer sharks.

Unfortunately most of us can’t travel to another state, let alone the other side of the world just now, but check the calendar below to see if there are any whale watching opportunities near you. If not this year, then maybe next year or the year after. They are a definitely an awe -inspiring sight. 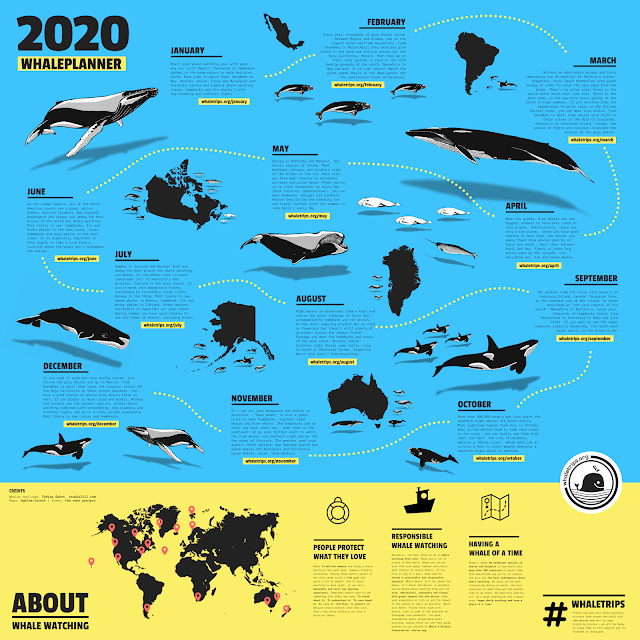 If you are lucky enough to come close to a whale on the water, stay at least 100 metres away. Don’t travel fast if you are in a boat and don’t touch them or feed them. Much the same holds if you find one stranded on a beach. Don’t feed or touch it, just call the nearest Wildlife office or Environment Agency. NSW has a special rescue service for whales and dolphins ((02) 9415 3333).  Call the local police if you don’t know who to call, and please, please don’t leave your rubbish behind.
Email Post
Labels: Return of the Humpbacks Where to see them