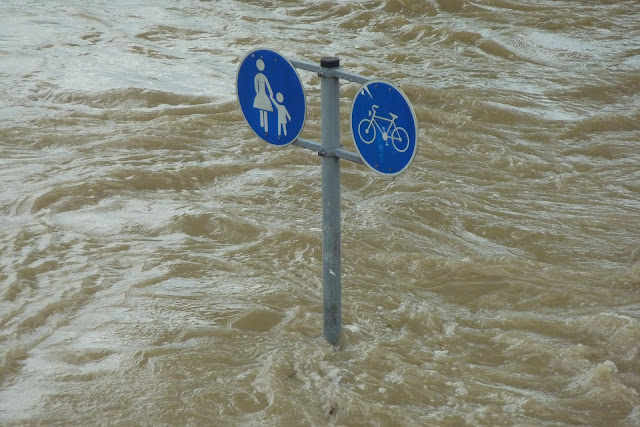 Image by Hermann Traub from Pixabay

As I write there are flood warnings out for southern Queensland and Northern New South Wales with many small towns being evacuated and promises of more rain on the way. While there have always been floods, their number and intensity has increased as the world warms. Higher temperatures of both sea and land lead to increased evaporation and increased rainfall and the number of days of heavy rain have increased every decade in line with global warming. Unfortunately Australia has front row seat when it comes to climate change and should serve as a warning to other countries. Should you have doubts take a look at the video "Hell to Highwater" produced by the BBC earlier this year right after the bushfires.*

The number of flood deaths has also been rising, not just here but in the USA as well. It is the second highest cause of death from weather related phenomena after heatwaves. The USA has recoded an average of 86 deaths a year for most of the last thirty years, but by 2018 the average had risen to 100 per year.

Many of these fatalities could have been avoided. By far the most common reason for them is people being swept away as they attempted to cross flooded creeks and rivers –around fifty per cent in the USA, but as high as 50 out of 68 in Australia.

The Australian research shows that the risk is higher in places with moderate flood risk and that people in 4WD’s are particularly vulnerable, in part because advertising for such vehicles implies that they can get through where other vehicles can’t. So here is the first rule courtesy of the US Government website:

If you see floodwaters, TURN AROUND, DON’T DROWN

We saw this when a flash flood unexpectedly struck Hobart in May 2018 and in the never – before -seen floods which struck villages in southern Germany and northern France in May 2016.

Image by Linda Russ from Pixabay

Other ways to protect yourself and your family

·         Afterwards don’t re –enter until told it’s safe to do so. Floodwaters may be contaminated and full of debris. Don’t turn on any electrical appliances as you can be electrocuted especially if standing in water, wearing wet clothing and so on.

The following short video by the ABC has more

See also the excellent US Government Website which has additional advice, especially when dealing with the pandemic at the same time.

Next in this series: Extreme Weather -4 Surviving severe storms, hurricanes and cyclones, though I'm sure we could all do with a bit of Christmas cheer in between

*PS. The bushfire victims such as those in Cobargo are still living in tents despite all the charitable donations and promises of government support!