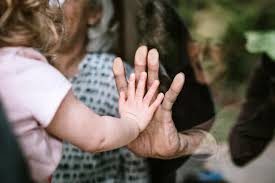 It’s the season of Peace and Goodwill and it’s also a frantically busy time of year – it's the end of our the school year, there are concerts, workplace functions, Christmas Holidays to get ready for and  compulsory get – togethers with family and friends. There have also been so many Commemorative days crammed into the last month or so that I have no hope of covering them all. Nevertheless, I will do my best to mention at least a few of these starting with Human Rights Day which was on December 10.

This year’s theme is “Recover Better, “about using the extraordinary involuntary opportunity with which Covid has presented us to improve life for as many people as possible. For those at the back of the class who may be unfamiliar with the concept of Human Rights we’ll start with a brief outline about the origin and content of the Declaration of Human Rights (see video below) and then I would like us to spare a thought for those who are not able to enjoy those rights, particularly those who have been killed or incarcerated for defending the rights of others.

Twelve journalists have been killed this year for telling the truth. According to human rights organisation Global Witness an estimated 1738 environmental activists were murdered between 2002 and 2018 across 50 countries. In 2019 things got even worse, with 212 activists being killed in a single year.  Unfortunately that number is likely to be even higher as many deaths go unreported. Countries in which the highest number of deaths occurred were Colombia (65) and the Philippines (43) and mostly involved conflict over natural resources  -mining, logging or expansion of agribusinesses.

Many other brave people have also been incarcerated, harassed or sacked just for speaking out. I’m thinking here of people like Zhang Zhan, the 37 year old former lawyer who alerted the world to the Corona Virus outbreak in Wuhan.  She is now in detention, intubated with a feeding tube and with her arms restrained so that she cannot continue with her hunger strike. I also think of the twelve young people who have been imprisoned in Hong Kong, for wanting to continue living in a democracy.

Then there are the whistle blowers such as Julian Assange, co – founder of WikiLeaks which revealed damaging secrets about war crimes and atrocities and the corruption in Kenya and Tunisia which led to the Arab Spring. He too is still incarcerated and threatened with extradition after ten years of exile and incarceration and closer to home, here in Australia we have David McBride, an ex-soldier himself, who also sits in gaol for  alerting the media to war crimes committed by small number of Australian soldiers in Afghanistan, after he had tried all other avenues. By contrast, the soldiers involved in this incident were merely dismissed, something that happens when you steal paper clips from your work, not for ouright crimes like killing non combatants.These are but a few that we know of, named and unnamed who face an uncertain future for standing up for others.

These people need much more than our thoughts and prayers. They need letters to MPs, Petitions, funding if you can afford any because many who speak out also lose their livelihood. You could also donate to the organisations which are working to gain their freedom. At the very least they need letters of appreciation and encouragement.  Here for example is the global petition for Julian Assange and the GoFundMe Page for David McBride

Then there are those currently being persecuted in their own country such as the Uighurs in China and the Rohingya in Myanmar and those in all the many countries currently riven by war. Those fleeing from war, persecution and environmental destruction also need and deserve our help.

On the subject of  refugees, I want to make special mention of the 300 or so refugees being held in off -shore and on -shore detention in Australia and especially the little Tamil family which had made their home in Biloela, but have now spent 1000 days in isolation and detention on Christmas Island. These people have already proved themselves to be good, hard -working citizens and the little country town and the little country town in which they have been living desperately wants them back. Read their story and sign the petition about this here.

These are by no means the only Human Rights violations. They include things like not being allowed to practice your religion, being discriminated against at work, not being allowed any free time, or when the law is not exercised impartially, but let start with those which involve deprivation of life or liberty, because all other freedoms follow from there.

What can be done when a country breaches International Human Rights Law?

The most serious crimes such as genocide or war crimes are dealt with by the International Criminal Courts after referral by the UN or the country itself:
When a Country Breaches International Human Rights Law

There are also 184 non profit organisations scattered across 112 Countries. Perhaps the best known among them is Amnesty International which advocates for individuals, investigates breaches, runs campaigns and supports those in prison. Click here are some actions which you can take now. It is also where you can write individual letters of support. Other International organisations include Human Rights Watch and Global Witness but click here for more.

Within Australia there are groups such as the Refugee Council of Australia which has been very active with respect to the rights of those in detention.

Must go, much to do. Look after yourselves and be kind to others – more soon,