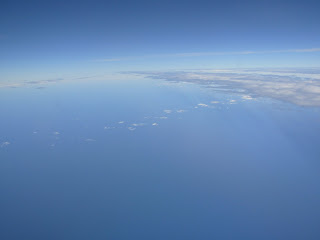 In case you have been wondering why you haven't heard much from your intrepid correspondent lately, it's because I have been in Vanuatu for the last couple of months. Not only are there hardly any computers - only two out of 84 islands have internet access, but most places do not have electricity. I must admit, I was a little shocked at how little I knew about one of our nearest neighbours.

Usually I do a bit of research first but, not wanting to sit home alone when the axe fell on my 25 year marriage, I left on only a couple of days notice expecting that I'd be able to find everything out from the internet or a library when I got there. Not true. Not even the tourist bureau could tell me much, as I doubt that the staff have ever been to the outer islands. Yes, there are brochures about expensive resorts, sapphire beaches, volcanoes and palm fringed islands, but most of Vanuatu is geared to wealthy tourists and tax evaders not budget travellers, so here are a few things which I've learned which you might not find in your Lonely Planet. 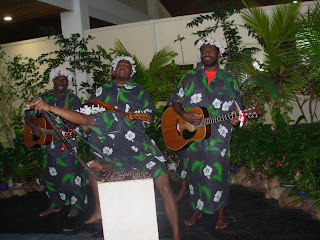 String bands welcome you as you arrive at Bauerfield International Airport. This is a vast improvement on Heathrow' s AK47s.


Nivans, as the people of Vanuatu are called, are the ultimate optimists, all 180,000 of them. Although they live on the rim of fire which is prone to volcanic eruptions, cyclones and rising sea levels, they call their country "The Land Eternal." 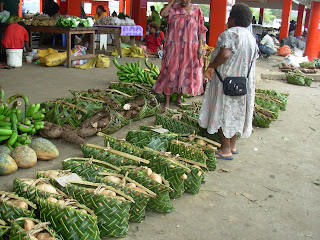 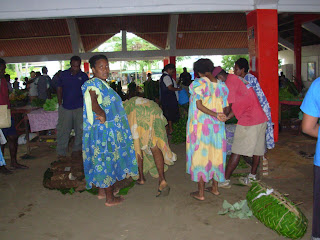 Down at the Market, Port Vila. Note the 'green' bags.


One of my first missions is to the local market on the waterfront in Port Vila. The capital is not all that attractive with rubbish piling up in the streets and many Chickenfeed -like shops that have never seen a coat of paint, but the harbour is an absolute gem, a perfect horseshoe of blue dotted with yachts and tiny islands.
The ladies all wear their colourful Mother Hubbard dresses and frown at tourists showing their legs in shorts or even jeans. I am glad I am wearing a skirt. They all assume that I am an Aid worker as tourists usually come in pairs. I feel like a fraud.
When I tell them I am not, the next question is always "Where is your husband?" If a man asks, I say,"He should be here shortly." If it's a woman, I tell them about the divorce and they tell all their friends and cluck sympathetically. They also want to know all about my children. How old? How many? Where are they? Nivans love a good story.
As well as being very modest, they are also deeply religious. Don't try to get anything done on a Sunday unless, like Ruth (below), the shopkeeper or stallholder is a Seventh Day Adventist. 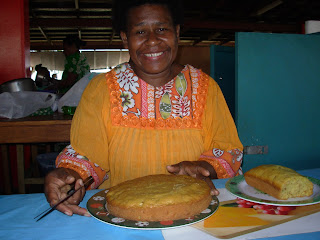 Ruth serves banana cake at her market stall. Her Simbaro - manioc, banana and coconut milk steamed in sea-cabbage leaves, is pretty good too!


Lap -lap is not something you wear. It is the national dish. It too is made of manioc or taro with coconut milk and sometimes topped with fish or chicken. Then it is wrapped in banana leaves and cooked over a long slow fire. The taste is bland and inoffensive.
Although I don't usually eat fish, the poulet fish is delicious too. I didn't even realise I was eating it, because it tasted so much like chicken.
Another popular dish - coconut crab, has lately been removed from the menu of the better restaurants because it is in danger of extinction. The brightly coloured reef fish can be toxic, especially after a cyclone. The poison affects the nervous system so that you experience weird sensations such confusing hot with cold and so on.The way to find out whether a fish is edible or not is to feed a bit to the ants first.

One of the finer legacies of the condominium period when France and Britain jointly governed Vanuatu -then the New Hebrides (until Independence in 1980), is that there are excellent pastries to be found in Vila, occasionally good coffee, particularly that grown in Tanna, and crusty baguettes can be found all over the islands. 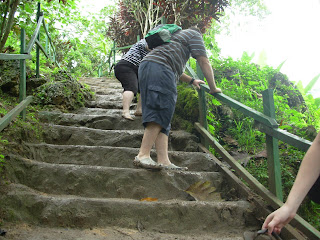 Getting to the Cascades, one of the local attractions. This lady was a bit annoyed that I was photographing her muddy feet. "You'll be able to take pictures of your own on the way down!" she said. 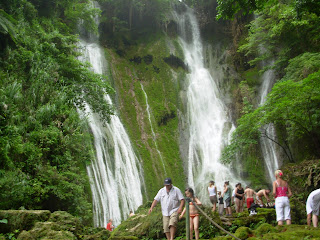 The Cascades, an expensive privately owned waterfall near Port Vila


Outside the two more developed islands Efate and Espiritu Santo in the North, there is no Backpacker -style accommodation, only five star resorts or very basic bungalows where you are lucky to get a cold shower and a mosquito net. Here are some of the ones I stayed in. And yes, Nivans are among the friendliest people on earth.
. 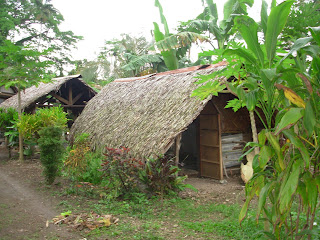 A typical bungalow. This is the one I stayed in with Wesley Moses and his family at Eratap Village 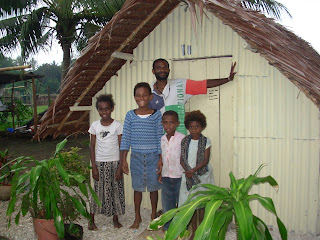 My own little Wendy House in the Village of Epau on Efate with my hosts, 'Papa,' Rita, two of their children and a friend.


There is a reason for building low to the ground. These buildings, despite their apparently light construction, withstand the cyclones to which Vanuatu is prone, far better than their concrete counterparts.

It's Sunday again and the little blue church is bursting at the seams to the strains of "Dem Bones" being sung enthusiastically. Nivans have wonderful voices.

Nellie one of the older girls, is now my 'sister' and is obliged to show me around. She greatly admires my toenails, so I paint hers. Pretty soon all the other women come around - the mothers, the girlfriends, the grandmothers and the little girls, till I have done everyone's. The younger children are delighted with the bubble mix I've brought and in the evening we all end up playing cards. I am unanimously voted a "Goodfella" by all, even though I didn't go to church. 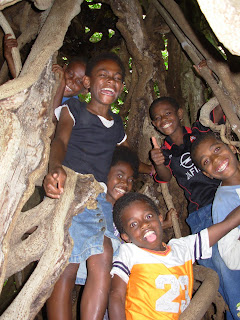 Village children in Epau show me their treehouse inside a giant Banyan Tree. 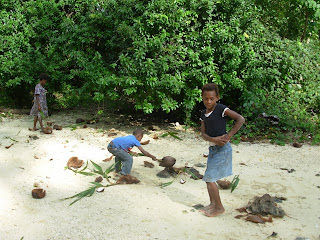 Playing with the children on the beach. Iselle is showing me a game "Taki, Taki, Bear" and Peter is opening a 'creamed' coconut for us to eat. (I'm sorry that I have forgotten the name of the little girl on the left). 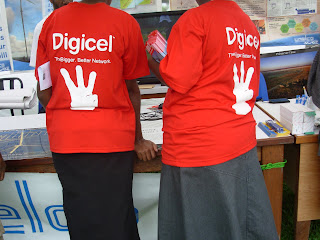 While computers are as scarce as hen's teeth, everyone has a mobile phone. Digicell which is building phone towers everywhere and which was originally a Caribbean company, has totally cornered the market. The mobile is now the favoured election sweetener - elections are on here too - overtaking the Le Crueset style saucepan which was extremely popular at the last one.


Transport is one of the biggest problems. While there are very cheap mini buses all over Vila, there are very few cars and very few roads anywhere else. Most of the infrastructure is a legacy of World War II and has seen very little maintenance since. They don't need speed humps in Vanuatu. They have ski jumps and signs saying "No more than 14 people to the back of a Truck" - anything with four wheels is a truck* - though this is not always complied with.

Getting between islands is a logistical nightmare since the islands run north south in a long line spanning around 1500 kms. Most tourists fly, but this isn't cheap and the planes get smaller and smaller, the further you go from Efate. Just getting a drum of diesel to one of the islands is a major feat and I saw men dive from the bridge to retrieve wooden beams intended for cell towers but heading out to sea. I thought it would be really exciting to go by cargo ship. Well it was sort of, but nowhere near as romantic as I imagined...

*Bislama the Official Language only has about 1600 words and thus one word must do many jobs. It also leads to some interesting conjunctions. Basket for example, means anything you put something in. Thus my backpack is a basket and a bra is "basket blong titty"
at December 01, 2008