Tales of the South Seas 2 - Prisoner of Ambrym 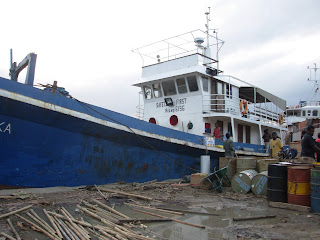 The Moika is an old Indian cargo ship that has a list to port even before it's loaded. The sign on the bridge says "Safety First." Very confidence inspiring.


"Come Monday at six," the crew says. Three days later at 11.30, under cover of darkness we finally get underway. Nivans are a patient lot but no wonder a cheer goes up from the wharf as we leave Port Vila. This phenomenon is known as Island Time and drives foreigners, especially the ubiquitous and punctual Germans, insane. Mine is the only white face in the sea of smiling brown ones.

On the open water the journey is rough and the boat heaves and shudders as it is hit by house -sized waves that spray over the passengers huddled on deck. A storm hits. I'm cold, wet and violently sick. Passengers sleep wherever they can. A lovely lady covers me and her son with a sarong and later her coat. Though a crew member offers me shelter in one of their cabins, this actually makes me feel worse, so I go back outside and cling to the rails.

By morning, passengers and cargo are being dropped off via tiny dinghies at coastal villages barely visible from the sea. I escape at Port Sandwich at the southern end of the island of Malekula because I am trying to reach Ambryn in time for the annual Rom Festival. Alas, after another few days wait in Malekula, it's over by the time I finally get there. 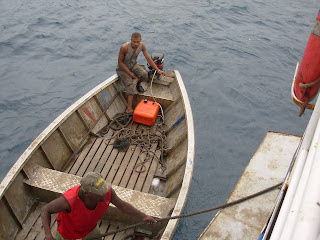 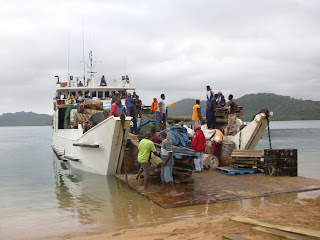 The Brisk, my second ship, has the advantage that its flat bottom allows it to enter the fringing coral reefs although often it doesn't quite reach the shore. It travels over the water with the grace of a matchbox in a washing machine. This ship is Australian owned and conditions are somewhat better and cleaner.


Landing at Ambryn looks like the sinking of the Titanic. In the night we clamber over drums, cell tower components, bags of rice and concrete, sugar, biscuits and toilet paper, sheets of tin, boxes, bedding and furniture, even a new red 4x4 and step straight off into the ocean. Children scream. Dogs bark and hundreds of people with torches wait on the shore. It's daunting to see another boat just like this one wrecked and rusting beside the dock. 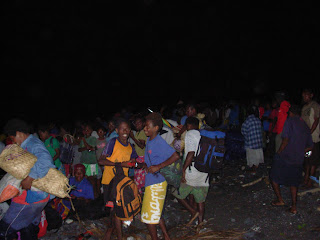 The Landing at Ambrym looks like the sinking of the Titanic


Ambrym has a reputation as the dark island, not just because of its black volcanic sands that won't grow anything except coconuts, but because black magic is said to still be very prevalent there.

However, having missed the festival, there isn't a lot to do on Ambrym, so when a German student comes to visit Mt. Benbow, the wild volcano a few days later, I agree to come along and share the transport costs.
This proves to be a bit of a trial - a 30 km walk from the nearest village. This is supposed to be done over two days, but one of the tents has broken poles so we walk out again the same day.
Despite our valiant efforts, the volcano stubbornly refuses to show its face, blowing great clouds of sulphrous smoke instead. A special medal of honour should go to Jackson, one of the two young guides, for walking barefoot and letting me wear his shoes to walk over rough cast lava until he could fix my thongs. 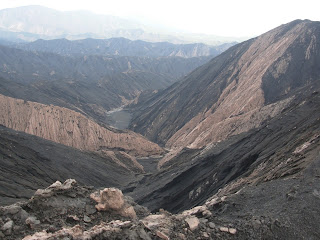 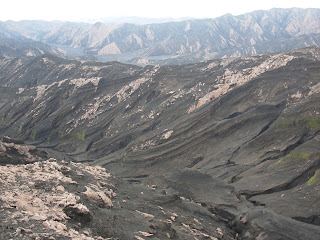 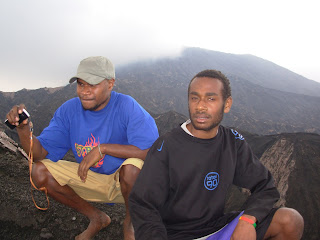 Aaron and Jackson, the guides 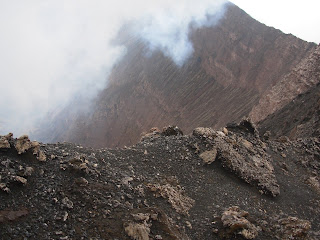 Mt. Benbow: Part of the rim of this 14 Kilometre wide volcano, one of several active ones in Vanuatu. Local people say they have not seen any lava here since the last earth movement two years ago.


A glutton for punishment, Sacha the student, goes up again the next day revisting Benbow as well as seeing Mt. Marron, the other volcano, which is even further away, but doesn't have any luck either. Meanwhile, I have had enough for now and return to Craig Cove with some politicians on the electioneering trail.
Back in the rest house, Arnold another German, but one who lives in Canada, is preparing to go up. He boils and carries in ten litres of water and food for five days, then waits patiently in the rain day in and day out, until finally he returns with magnificent pictures showing clear skies and lava. I just had an email from him where he writes,


"I ended up spending 7 nights up on the ash plain in pouring rain before I had a few glimpses into the crater with the lava lake, which was actually present!" Now that's what I call dedication. If you would like to see some really good volcano shots you can look at his at

Back at Craig Cove, I'm told that the Brisk is due in four days, but because of the elections this extends to ten. By this time I am really broke, have read all my books, filled up my notebooks, eaten all my food and begun to write on the back of my airline tickets. There is nowhere to go that I haven't already walked to. I have tried bribing passing yachts. It seems I am not cut out for life on a tropical island after all. I spend the days swimming, walking to the villages and talking to the locals. Everything shuts down at sunset at around six o'clock.

Local people do their fishing and shopping, drop off produce at the wharf or the market and visit their friends on neighbouring islands in these tiny canoes. 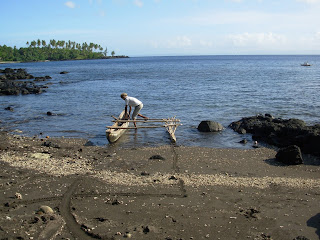 Charles has arrived in Craig Cove to go to church 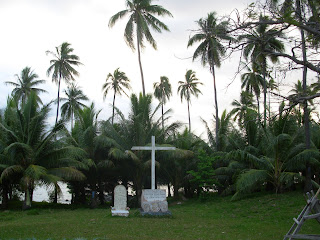 A lonely missionary's grave.
Their legacy is an excellent education system. Most older people speak French and English as well as Bislama, the official language. Charles, who is very well spoken says that when he was young, he had to learn Spanish as well, but since Independence the young people learn only Bislama 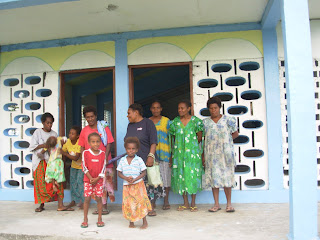 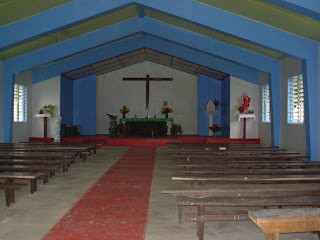 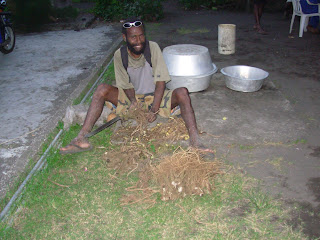 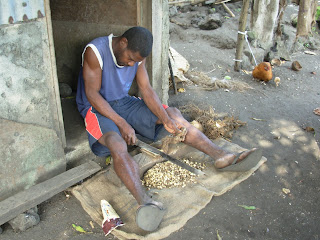 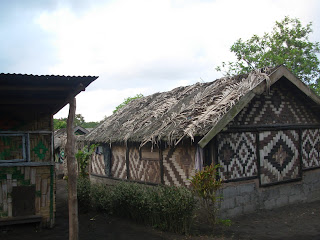 Chief Philip's Nakamal in the mountains


Kava drinking is the nightly entertainment for men. They meet in the chief's Nakamal (meeting house) to discuss village affairs, particularly the elections. Women were traditionally banned from participating, but I am invited to join in. Kava is made from the roots of a plant. From a pharmaceutical point of view kava is said to contain around 47 types of analgesic compounds. No wonder I sleep so well! It also has spiritual significance in Nivan culture and for a man to refuse an offer to share kava, means that he is rejecting an offer of friendship.
In the towns, a red light does not mean what it does in the west - a place of ill repute, a doctor's surgery - here it means a place where Kava is sold. 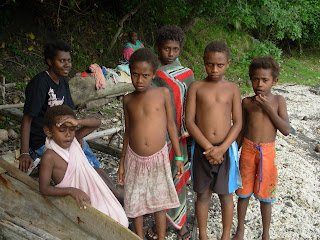 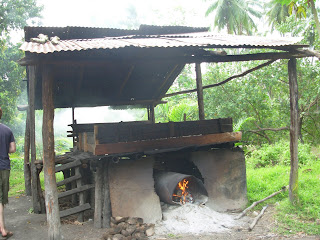 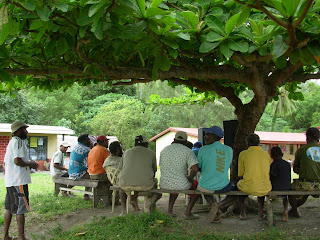 Electioneering Vanuatu -style. There are a record number of candidates this year. Excluding those facing criminal charges or who have not paid their rates and taxes, and one who was injured by the proverbial falling coconut, there are about 351. Raphael Worwor from here, becomes the Honourable Raphael Worwor, Minister for Lands. 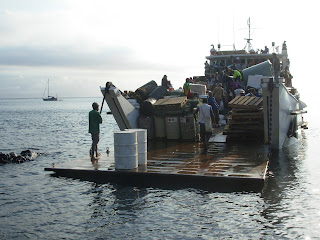 
We sit on top of the bridge the better to enjoy the view of passing islands. The other passengers and crew share their food. The crew remember me from the previous trip and invite me in to the warmth of their quarters when it starts to rain. I feel really guilty about this as other women are huddled under tarpaulins outside or in far less salubrious conditions below decks.
We pass another one of the ships, The Sarafenua, which has broken down at one of the little ports on Ambae. Otherwise it's plain sailing until we leave the lee of the islands.
Just when I think I have finally gotten my sea legs, we hit the open water between Ambae and Santo and I feel as wretched as before. 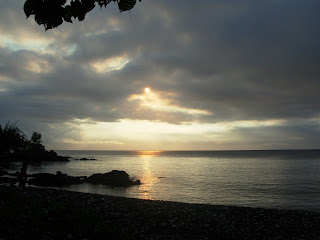