Tales of the South Seas 4 - Under the Volcano 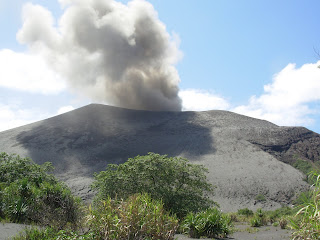 First Glimpse of Yasur the User- Friendly Volcano -well, most of the time anyway.
In local folklore Yasur is the resting place of the souls of the dead

I am now on the island of Tanna - far to the south of Efate and considerably cooler, to see "the world's most accessible volcano."
OK I cheated. This time I flew, unwilling to spend more time waiting around or suffering long, miserable trials by water. Besides, by the time you add in the additional accommodation costs, flying probably works out cheaper.
Tanna is one of the larger more fertile islands and apart from the volcano, is famous for it's coffee and wild horses. 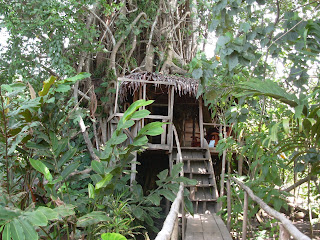 The treehouse in a Banyan Tree I stayed in at the Jungle Oasis, just under the volcano.

Kelson, local chief and the owner of this fine establishment, is also a politician and has just missed out by eleven votes. There is to be a by-election in Tanna. I run into both him and Raphael Worwor from Ambrym again in Efate, also Eva and collegues from the Education Department whom I met in the hostel in Santo, and even Elizabeth, the lovely single Mum who braided my hair there. 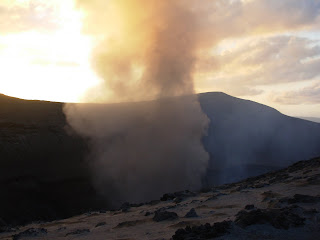 Although Yasur rumbles and booms all day, the fireworks really begin at dusk when the glowing lava and lava bombs become visible. It is a fantastic light show and smells just like fireworks too. 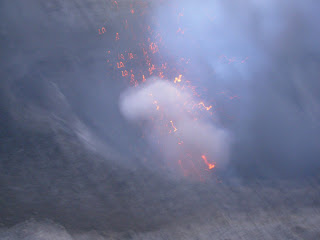 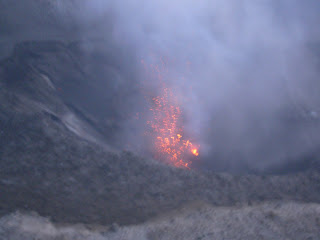 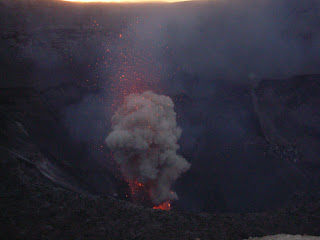 For more impressive pictures see Arnold's of the same place
It was the sight of Yasur's display that brought Captain Cook hurrying to the island and anchoring in Port Resolution, which he named.

It is truly amazing to be able to get this close to such an active volcano. Again, you may not go up without a guide. The guides know which way the wind is blowing and where to stand. There are thousands of earth tremors here daily and the mood of the volcano varies considerably. If we were in Australia, there would be a hundred kilometer fence around it in the interests of health and safety or fear of public liability.
Not here. Levels 1, 2, and 3 are mostly OK, but when superheated rocks fall on the village - Level 4 - even the guides call it a day.

Speaking of health and safety, when I was in a kitchen shop in Brisbane the other day, there was a sign on the wall saying that no knives could be sold to persons under 16, even if accompanied by an adult. This made me laugh. In Vanuatu even six year olds carry bush knives a metre long. No severed fingers either and handy for opening coconuts for passing strangers, cutting down a bunch of bananas or other household tasks. You just never know when you might need it.

Not that there are too many nasties in the bush here - no snakes, poisonous spiders or large animals like tigers. There are however, insidous nasties like malarial mosquitoes, leptosporosis, head lice and rats. Beware the rats. One fellow backpacker left his M and Ms in his backpack and found a hole had been eaten through it and every last M and M gone in the time it took for him to eat his dinner. 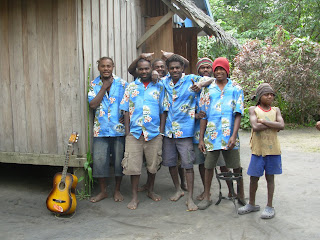 My pet string band at Jungle Oasis. These boys may have battered guitars and holes in their shorts, but they do know how to keep a beat and they sing like angels

Just like Ambryn, Tanna also has a bit of a reputation for magic and is more traditional than many other islands. There are a number of family links between them. The chiefs here will not let me drink kava, nor let their women wear tee -shirts. It is unconfirmed but highly likely that certain places are also off -limits to women. The lodge owner was quite happy to direct a male backpacker to the blue hole and a waterfall - foreigners may not swim there at all, but not me.

While on the way to Port Resolution I came upon a tiny sign advertising firewalking. It was strange going there by night to a hilltop village and watching this performance by firelight. I have seen other versions of it since, but never to quite the same effect. 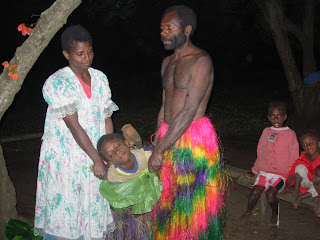 While the fire heats up, there are simple demonstrations of everyday magic - how a child can be carried on interlocked leaves of the wild Hibiscus, basket weaving etc. Then the main event begins. 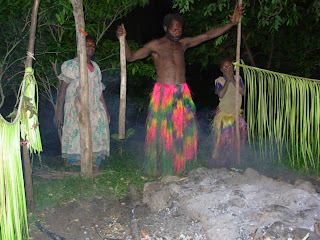 Although the rocks are swept of burning branches, the stones underneath are still hot. In other places they prove this by pouring water on top and showing how it sizzles. The firewalker then goes into a trancelike state and walks slowly across. Kava may well be involved and some mental preparation is required as well.

There are some other interesting wrinkles on Tanna such as the John Frum Cult, practised in villages not far from the volcano. This is essentially a cargo cult based on the arrival of a man from the sea who promised the villages that great things would follow. Sure enough, before long the Americans began to drop equipment and medical supplies with red crosses on them. They continue to emulate these in order to attract more such divine blessings. Once a week the people come together for all night sessions of singing and dancing. However, the night I go there with another tourist, there had just been a death in the village and things are rather quiet.

Disappointed that I still haven't seen any dancing, which is said to be really spectacular, I return to Efate next morning.
Email Post