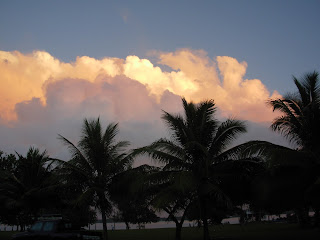 A storm brews over Santo

Espiritu Santo, the largest island, being closer to the Equator, is much hotter and more humid than Vila. It is also more laid back, cleaner and has home comforts like ATMS, hostel type accommodation and internet cafes. My family hasn't heard from me since I set off on that rusty ship for Ambrym.

My first excursion is to Surunda where James Michener lived. It's easy to get there but hard to get back until I run into Daniel, the driver we had on Ambrym. This happens often in Vanuatu. One reason for this is that marriage is patrilocal i.e. traditionally the bride goes to her husband's village, but then his sister has to marry one of her brothers to keep the numbers even and to help build alliances in a country where there are hundreds of different tribes. The result is dense networks of relationships which involve much visiting between islands. 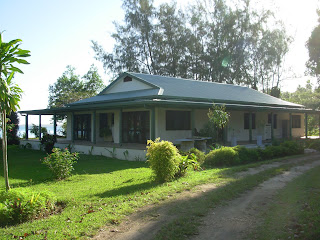 The serene house of author James Michener, wartime historian who wrote Tales of the South Pacific on which the film South Pacific was based.

It turns out that the scenes described by Michener were largely based on the nearby jungle -clad island of Ambae which was shrouded in rain and mist as I passed. Most of this side of the island is flat and covered in Japanese owned coconut plantations or beef ranches. There are however, plenty of reminders of the war years, when thousands of US troops were stationed here and there were 43 cinemas in operation in Quonset huts like this. 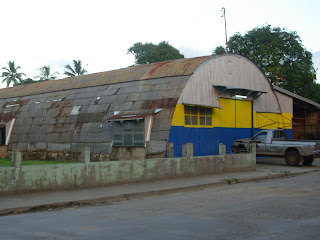 Quonset Hut- A typical relic of World War II. Others include plane wrecks, a bomb shelter, roads, airstrips and hospitals, most of which are still in use.
There are of course great dive sites too, like the wreck of the President Coolidge, a luxury cruise ship converted to a troop carrier that rolled over and sank in 10 metres of water after hitting a friendly mine, or Million Dollar Point where most of the rolling stock, equipment and stores went. This was supposed to be sold to the French at the end of the war, but hoping to get it for nothing, they let the deadline pass, so the Americans simply drove everything off the wharf and then blew it up.
I didn't see much of the President Coolidge as it was too deep for snorkelling, but I did enjoy the beautiful coral gardens and blue starfish the size of rubbish bin lids. At Million Dollar Point though, even snorkellers could see jeeps and ambulances, tanks and road making equipment lying in crumpled heaps, surrounded by tyres and brilliantly coloured fish. 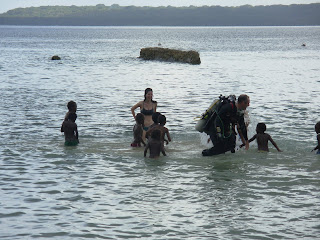 Divers and snorkellers leave the water at Million Dollar Point. Thanks to the Allan Powers Dive School for taking me. Allan, an Australian who's been taking divers there for forty years, was instrumental in having this declared a Marine Reserve.

My next adventure is to tackle the Millenium Cave, an extensive wet cave followed by a journey of several kilometres down a gorge in rubber life rings. Initially this was rather expensive but after rounding up the Aid workers and volunteers in the hostel, it became much more affordable. Most places won't do this. It's the same price whether there are six of you or one. 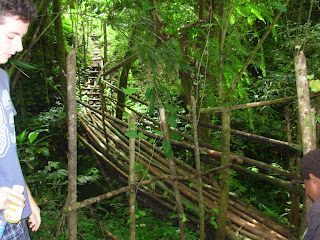 Access is by way of complex ladders and bamboo bridges 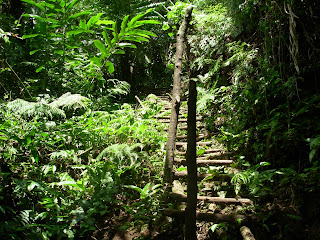 No stairmaster needed. The guides are impressed with my fitness for a foreigner. Just as well I did my basic training on Ambrym. You always have to have guides and get permission and pay the chiefs in the villages to do any of these things, including visiting beaches. It is the only way the traditional owners make any money from tourism. Independent travellers are unheard of. 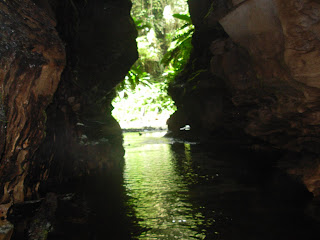 Exiting the Cave before entering the hidden canyon 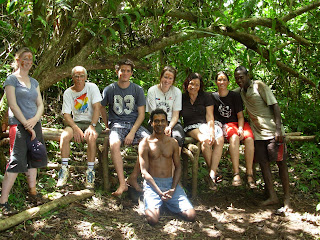 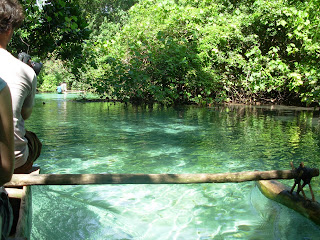 One of three blue holes we visited 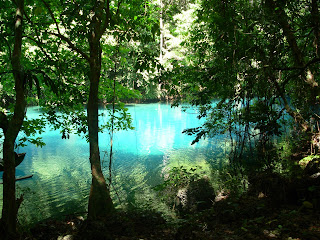 Jacky's in the North East is possibly the nicest, though they all have a different character. 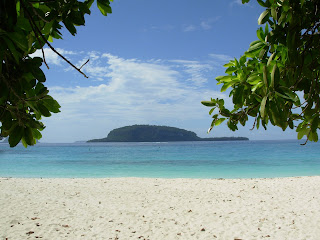 A little further on, we visit Champagne Beach. This picture doesn't do it justice. A perfect crescent of pure white sands set against coconut palms and turquoise water.

Alas, we can't travel further north because of a territorial dispute and no one wants to come to the vast Vatte National Park in the west with me, so our little party breaks up and I make plans to leave for Tanna, the only place guaranteed to have a working volcano.
Last Supper 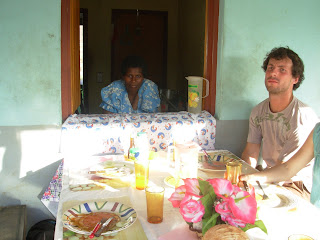 Usually it's Lap Lap in the market, but tonight it's steak, vegetables and delicious kumara chips at Alice's Restaurant, Shop #3 at the market.