The Charming City of Tomsk

In Tomsk I was met by Albert, another member of the Hospitality Club. Although he was in the process of renovating his apartment and had a gigantic new window arriving the next day, he took time out to show me around this lovely town.
Tomsk has long been a university town and shows the benefit of good planning. In the beautifully landscaped city centre, building heights have been restricted to show the attractive historical buildings to best advantage. Industry and apartment blocks are confined to the suburbs, while lovingly preserved traditional timber houses in the inner city add a rustic feel and a green heart. 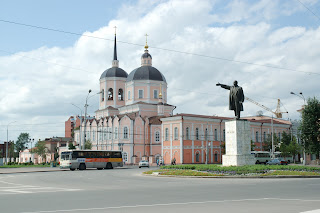 Like most Russian Cities, Tomsk has its statue of Lenin.
Here he appears to be directing the traffic 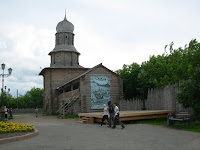 Tomsk began life in 1604 as a humble fortress like this
As we wandered through the streets, Albert pointed out quaint and curious customs which I would never have known about, had I not had the benefit of an English speaking guide. First we walked up a cobbled street to Resurrection Hill. This is where the first Fortress was - now rebuilt, and where Tomsk's Foundation Stone is. There were pleasant views of the town from here and lilacs were in bloom here too. Lilac must be the national tree of Siberia. 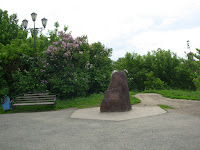 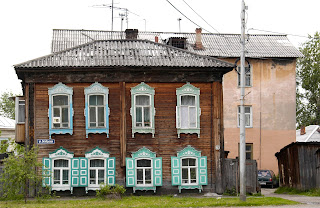 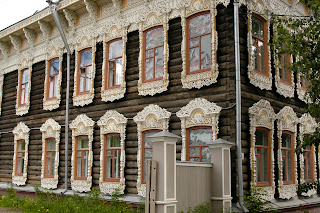 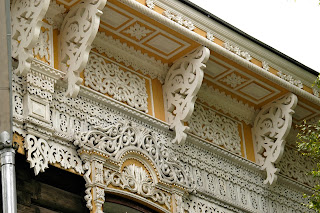 Photos by Albert Valeev
Next we strolled along the riverbank , a place where lovers like to promenade. Along the way we passed a statue of a Chekov with a very shiny nose. If you rub his nose, it is supposed to bring you luck. Not that Chekov ever lived in Tomsk. No, he remarked unfavourably upon it while passing through describing it as a rather dull town, so the town fought back with a the statue which was intended to mock him and show him as a drunk. It is, however a popular spot for amateur poets on a Friday afternoon and I am told that the town is much livelier these days. 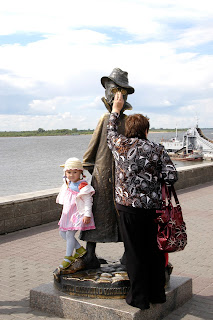 At the bridge where a stream enters the river there is a railing bristling with locks. When couples want to declare their love, they attach a lock here and throw the keys into the river. I told you Russians were romantics! The fountain nearby is also popular spot for wedding photos and serves a similar purpose. 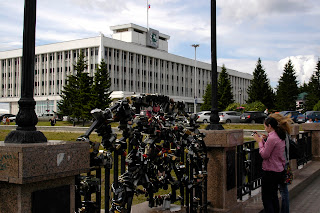 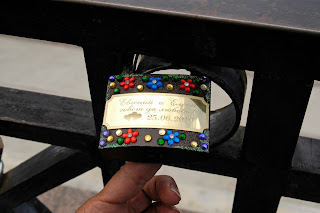 Detail on a lock
Photo by Albert Valeev 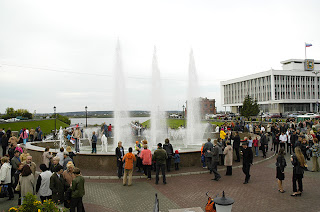 The Wedding Fountain - It's Monday today, so no weddings.

Other 'luck bringers' include a statue at the university and an icon in front of the medical school which are diligently rubbed before exams. The strange wire mother in front of the Gynaecology clinic is said to convey good wishes to pregnant women and those trying to become so. I find it fascinating that after such a long period of rationalist - materialist culture, people still cling to ancient beliefs and are also still very devout church -goers. 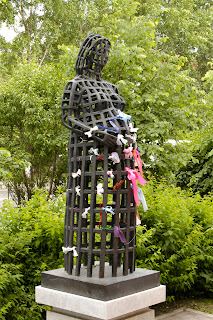 People add strips of cloth from their clothing to this monument outside the Gynaecology Clinic to send good wishes to pregnant women and those who wish to become so.
Photo by Albert Valeev 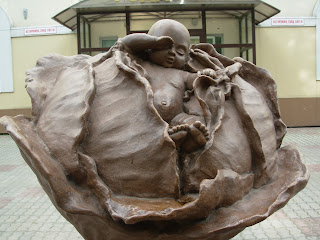 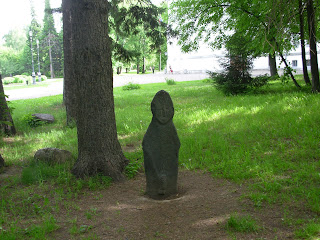 This icon is favoured by medical students just before exams
On a more somber note, we also visited the KGB museum which had once been a notorious prison but is now dedicated to the memories of those who were tortured, murdered or sent to the Gulags of which there were several in the vicinity. Outside, the flowers were still fresh at the Polish Memorial to Victims of Oppression.Inside there were faded photos, transcripts and mementoes including small items of children's clothing of those who passed through these walls, many of them never to be seen again. 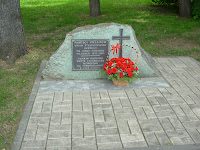 Fresh Flowers for Victims of Oppression Back in the daylight we walked quickly through the public parks and on to the university, finishing off with genuine Russian bliny – large filled pancakes made on a revolving hotplate. Albert's had a filling of ham, chicken, cheese and mayonnaise while I chose the one with berries and smetana (sour cream - also served with everything) but I ended up eating half of his too. Both were delicious! 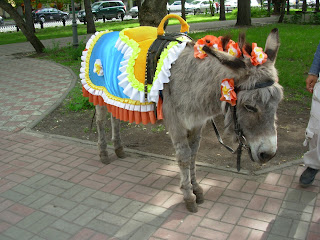 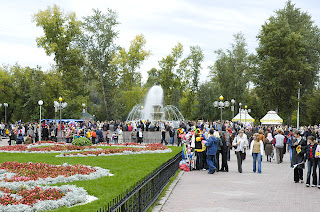 The Park Photo by Albert Valeev 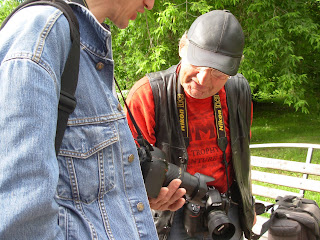 Mine's Bigger than Yours! - this is what happens when two photographers meet Tomsk University has been going since 1875
Photo by Albert Valeev 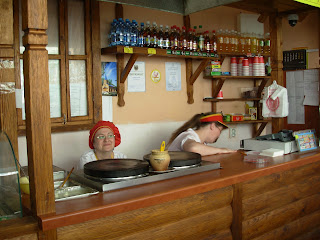 Pancake ladies- Russia's answer to McDonald's and much tastier too!

It was nearly as hard to get out of as it was to get in, but one of the nice things about staying in people’s homes for a short time, is that you get a glimpse of what normal life is like in another country.What do people eat for breakfast? What sort of music are they listening to? What are the houses like inside and so on. This kind of living culture interests me more than museums. It's also nice as a traveller to have a few quiet days just to relax, do the laundry and use the computer.
Many thanks Albert, Tanya and Alyenka for making me so welcome and showing me around 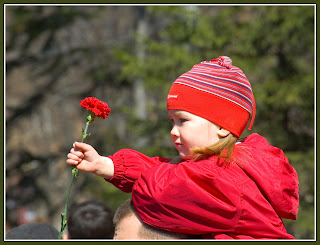 Hi Alyenka!
Sorry to  hear you have all been sick. Get better soon and all the best.


PS: Many thanks  also for letting me use your photos Albert. My laptop had a nervous breakdown when I got home and I lost some of mine while transferring from the old one to the new one.
My photos have just miraculously returned from Cyberspace so I have added a few of the old ones in. Still can't fix the fonts on this one though.