This clip was a happy accident, but I'm quite proud of it as it gives you an idea not only of what the scenery was like but also the sound of the train. It really does move that fast. The pine forests - at least as seen from the train, were nowhere near as tall or thick as I had expected. Indeed, one of the passengers told me that they were being cleared even faster than the Amazon. Nor did I ever see a birch tree as thick as those the Buriyati used to make their milk churns from.


The marvellous thing about Russian trains is that they have BEDS – well, short bunks with fresh clean sheets -even in cattle class. They also have samovars -continuously boiling urns of hot water, where you can make coffee, tea or two minute noodles and scald yourself, anytime you want. Unlike buses, they also have corridors where you can walk around and at the end of each carriage there’s a smoking compartment. You also fly low enough to see the scenery. It’s not all peaches and cream though, as you will see under WARNINGS below, and despite all this, twenty -four or thirty –six hours, let alone six to ten days, is a long time to be on the rails, especially in 30 -40 degree heat.

The biggest risks as far as I could tell, were not the Russian Mafia, or being mugged for your wallet and passport, but alcohol poisoning from being invited to have a drink with too many hospitable fellow passengers, closely followed by accidental food poisoning or possibly heatstroke.

My first train from Ulaan Bataar was clean and newish and I shared a Second Class Kupe cabin (it even had tablecloths) most of the way with Taya, a nice girl from the Ukraine. On the whole though, the journey was rather uneventful, except for the five hour stop just before the border and the three hour one after, while we went through customs and immigration. 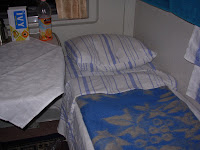 Kupe. Note the nice linen. All that's missing are the flowers.


Platzkarte – Third Class, was another story. Although I had diligently read my Lonely Planet and thought I knew what to expect, nothing could have prepared me for the sight of so many bodies clad only in sheets. Unlike Kupe, where you can close your doors, these are open carriages with fifty bunks arranged around the sides.The lights were dim when I boarded because it was four a.m. – (you’ve got to keep adjusting your watch to Moscow Time, because that’s the way all the timetables are set), and I thought I had walked into the morgue or, seeing it was rather hot, the set for the film “Coma.”

I took my place among the bodies, quietly bedded down in my own set of freshly laundered sheets and hoped I didn’t snore.

Platzkarte - Thought I had arrived in the morgue


The Good Soldiers
The bodies came to life in the morning. It turned out that this train was full of young soldiers who had just completed their year of national service in Vladivostock. I was to meet many more of them coming or going over the next couple of months. These soldiers were particularly nice. We shared food – they mostly had two minute noodles with mayonnaise – you get mayonnaise with everything in Russia, played cards and did our best to communicate using my phrase book.

Their transformation was remarkable – starting out in shorts and tee -shirts and coming out in full uniform, with freshly pressed shirts and polished shoes. Nor did they desert me in Krasnoyarsk when we arrived late the next night. No, they went to heroic measures to find me a place to sleep and carried my pack all the way, even missing their own connection in the process. 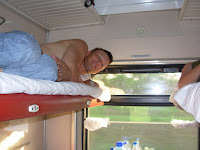 The bodies come to life in the morning 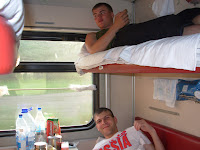 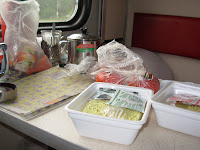 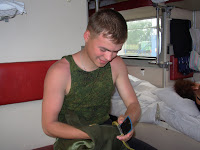 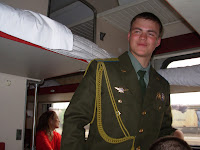 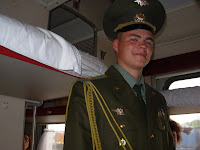 I was to meet many more wonderful people like these on the trains over the next couple of months and you will get to meet some of them on the following pages. The stations are pretty amazing too.

Don’t even think of opening the windows- it will turn normally convivial Russians into raving lunatics howling for your blood. This attitude no doubt conferred evolutionary advantages in the past, or even has survival value the rest of the year, but in the heat of this sweltering summer, it was just sheer madness. A young Englishman feeling a little queasy on the trip to Olkon Island tried to open one of the windows in the crowded van, but was immediately howled down by the other passengers and a girl on the top bunk on my train to Moscow, kept her foot on the tiny window in our compartment the whole night, just so I couldn’t open it.
The other thing guaranteed to turn Russians into homicidal maniacs, incidentally, is accidentally jumping the long queue for train tickets. This happened to me a couple of times when people I asked for assistance sidled up to the left-hand side of the counter and got me a ticket. What turns me into a homicidal maniac is waiting three hours at a ticket booth and having it close for lunch, just as it gets to your turn. Close behind is the short break whereby the cashier can be seen behind the window, idly doing a crossword or knitting a sweater or two, while you wait and wait. There’s not much you can do except learn the art of stoicism as practiced by your fellow queuers. Simply accept that “They” have the power and can deny you passage and you had better not upset them.
All people in uniform are gods. Whether it is the numerous police at the railway stations, the provodista who inspects your ticket and gives you your sheets on the train, the hotel receptionist who holds your credit card and passport or the numerous security guards at galleries and museums, they all ‘haff their ways” of making your life miserable and you annoy them at your peril. Don’t even think of expecting any kind of service. It is a completely foreign concept. So is smiling. There is one exception to this rule. Some stations have Service Centres, though you have to be able to read Russian to find them. Here they will organise your ticket without the queues for an extra charge.

BRING LOTS AND LOTS OF WATER. Oh. And if the provodista asks you nicely when you get on if you would like a cup of tea, expect to pay through the nose for it when she brings it. The cups are nice though!


Although the trains usually start out clean and with paper, soap and sometimes even hand towels, this lasts about 25 minutes, so be prepared. They also shut down completely at stations and at random times known only to the provodista.
Email Post