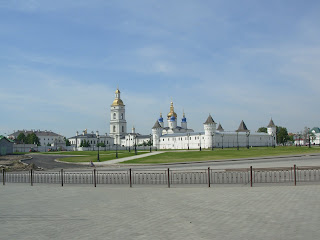 If was a charming modern Russian city, then World Heritage listed Tobolsk, with its white washed Kremlin and star spangled onion domes, looked like the Russia I had imagined from picture books and fairytales.
Set high on a hill, with industry and concrete apartment blocks relegated to an adjoining new town, there were beautifully laid out squares with fountains, flowers and trees. Everything looked freshly scrubbed and as if nothing had changed in hundreds of years. 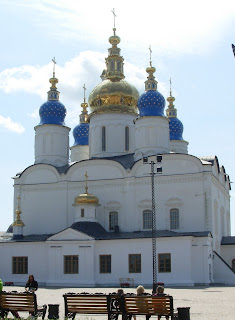 St. Sophia's Cathedral looked like it was made of marzipan


After a successful defence led by a band of Cossacks, a fortress was built in Tobolsk in 1587 to keep the unruly Tartars in check. However grateful the Tsar might have been, he soon needed someone to keep the unruly Cossacks in check. According to Lonely Planet, ( and , 2006: 502) the first major religious centre in was established here in 1620 “…to stamp out incest, wife-renting and spouse stealing.” Although Tobolsk went on to become the regional capital, it began to decline in the 1760’s when the new post road passed it by and even more when the Trans Siberian Railway did so in 1901. No doubt, as with , this has been its salvation. 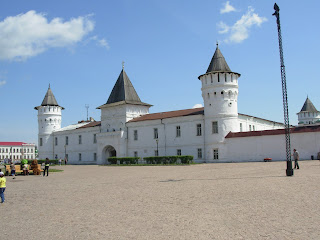 The Kremlin- the light poles don't really lean like that!


Unfortunately this has also made the place wildly popular ( I blame Lonely Planet who in 2006 described Tobolsk as Russia's "most memorable" town) and it was hard to get anywhere to stay. Prices had also increased dramatically since 2006. The budget -priced Hotel Sibir it mentioned at 450 roubles was now 2150 roubles and even the had tripled its prices. I can't altogether complain about this as the upkeep on golden domed cathedrals must be tremendous and the effect was certainly stunning. 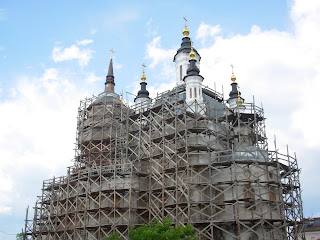 With the help of a local taxi driver, I eventually found a shared room in a guesthouse a long way out of town. There was no food or prospect of breakfast and all the shops were closed, but across the road a tavern was still hosting a birthday party. The host was able to rustle up a slice of pizza and a plate of bread and cheese for my breakfast and partner Asiya invited me to stay for a drink. Alas, after three or four train journeys and a long night in Omsk station, I had to take a raincheck on that one, and fell gratefully into bed. The next morning I was supposed to be going on a walk with Asiya, but I overslept our meeting time and ended up walking by myself desperately clutching my Lonely Planet.
It is a religious experience going into a Russian museum. I was the only visitor, but there were many custodians. They spoke in hushed tones and instructed me to put on blue disposable overshoes. After admiring the exquisite bone carvings, some modern paintings and the enormous stuffed animals, I was glad to be back out in the sunshine. The Folk Trade Museum next door, by contrast, was still free and very friendly. The young woman in charge - another Natasha, spoke excellent English and gave me a lovely fridge magnet, doing more for tourism than most of the frontline staff I had encountered anywhere in Russia. 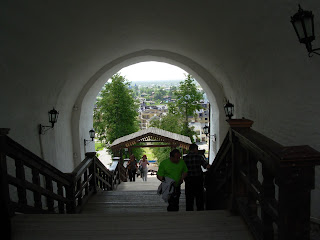 Stairway to the Old Town

Taking the arched stairway leading down to the brought me out at a festival in honour of some unnamed saint. The shashlik stands were doing a sizzling trade, a lively band played and children were busy with balloons and jumping castles while adults clamoured for the tiniest bit of shade. Opposite were the stately mansions of past heroes such as Mendeleev, the scientist who invented the periodic table. It was his earlier studies into the composition of alcohols that determined the present amazing strength of Russian vodka. Nearby was the which was the last hiding place of Tsar Nicholas II before he was executed in Yekaterinenburg in 1917.

The heat was oppressive, thick black clouds gathered overhead and my foot hurt as I climbed what seemed like ten thousand steps back up to the town centre where the bus stop was. I came out to the left of the square where the notorious Tyuremny Prison was. This was a way station en route to exile in Siberia and one of its more famous guests was Dostoyevsky. It was closed today as I hurried by, but it was not hard to imagine what it would have been like inside - faded photos of long dead faces, a few artifacts and personal treasures, long pages of finely scrawled transcripts and the sense of sadness and regret that so many intelligent and noble looking people had disappeared forever.
Although Tobolsk, like many places in Russia, has it's dark side, the whole place is like a living history museum, where you can breathe the air and feel the weight of events that shook the world. 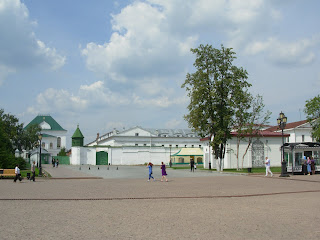 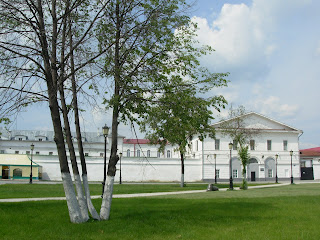 The bus came just as the rain began to bucket down and I made my way back to the guest house. The lovely concierge had washed and dried my clothes for nothing and I got ready to leave on the evening train.
at October 10, 2010