Long before there were trains, the main access to the interior was by water and the great rivers of . While Volga cruises remain the most popular, the Yenisey in ranks as one of the world’s longest rivers. The lure here had long been furs, timber and gold but in more recent times, it was also the site of a Gulag and an important defence post. Foreigners may still not go beyond Igarka.

One of the young soldiers lived at Igarka and I half - promised I would try to get there thinking it would be wonderful to do this trip by boat and see something other than the inside of trains. After gazing wistfully at four day cruises that cost over $180 for the cheap cabins and double that for the better ones, I decided to visit Yenisysk, 350K upriver by Mashrutka, the mini vans that service the countryside which is not easily accessible by train. A lovely lady on board, Varya, a school teacher, hugged me and called me a hero for travelling alone. She also taught me how to eat pine nuts without getting a mouthful of shells.
The next day was superb. While I was enjoying a pastry at the local market, one of the magificent white ships came slowly around the bend. Too beautiful to resist, I decided to give it one last try.
Down at the wharf, the crew initially said no, but as I was walking back to the hotel, they relented and sent a young engineer called Igor, to call me back. If I would be happy sleeping on the small loveseat at the foot of the stairs, I could stay for the trip back to . I was ecstatic.
The Valerian B. YKANOB (pronounced Itchanov and named after a long dead captain) was all polished brass and timber. It was a quaint little world. A traditional Russian family holiday experience which included the dogs. Formal meals were taken in an elegant dining room with flowers on the table, a dance floor and well dressed wait staff. For some reason it reminded me of the Titanic. Although there is a Samovar on board here too and my Chinese cup continued to serve me well, I did venture into the dining room for dinner. 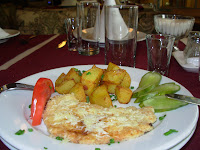 Dinner aboard the B. Ykanob

Other than the young engineer and some of the children, few people could speak any English, but it didn’t seem to matter all that much – we just did a lot of smiling, and the children really enjoyed being translators and practicing their English on me. 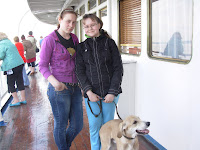 Danya and Katya, my young translators and their dog. 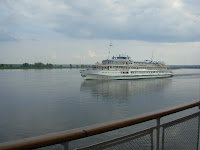 The Sister Ship races by 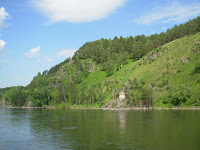 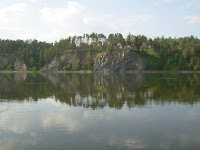 
The river was running high and fast with snow melt. On either side, there were high cliffs or low timber towns and in places, scenery very much like that on the with deep reflections of pines, though far, far longer. In the afternoon, we came to a little spot where crackling band music played over the speakers and everyone came out on deck including the dogs. This was the junction with the and the little tune was its theme song. 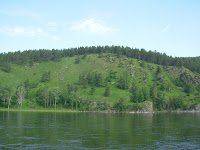 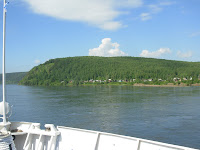 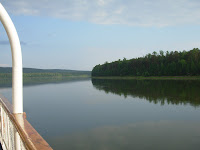 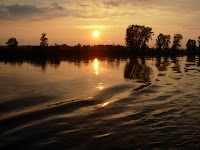 
It was hard to sleep at night being so close to the , but at last the sun set in a blaze of glory that turned the water to molten lava and silhouetted dark islands floating on a wide stream. Suddenly I was awoken by a man urging me to get up and go out to the side. I raced to the deck with my camera, expecting to see salmon jumping or flying fish. There was nothing in the water. All I could see were riffles.
It turned out that this was a notorious ship graveyard where many ships had met their doom. It was also a popular spot for fishermen since the cross currents here caused the salmon to rise. 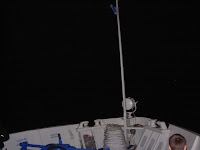 
Lublya, one of the passengers, could not bear to see me sleeping on my very public loveseat and quietly invited me to her cabin. This was well appointed with its own lounge and bathroom. In the morning she fed me chocolates and introduced me to the other passengers who now eyed me with new respect. I was endlessly invited to share cups of tea and biscuits and felt as if I had been elevated to the Gods. I found myself vaguely wondering who used the First Class cabins during the Soviet Era, also those on trains. Wasn’t it supposed to be a classless society? I hoped it was the returned soldiers, or perhaps the people's heroes, but rather suspect it was probably the party officials. Although the ship travelled very fast, it still took most the day to get back to . Once again, crackling music came over the loudspeakers – the Yenisey Welcome Song -and back at the big River Station families were met by friends and relatives. 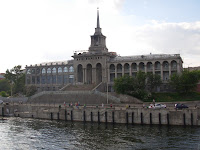 At the River Station it's Goodbye


All at once, everyone went their separate ways, trailing children, dogs and mountains of luggage and the huge ship was deserted. Feeling a bit flat, I walked slowly along the riverbank towards the hotel. 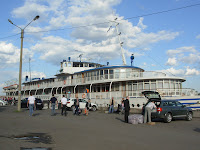 Parting of the ways


At this time of day, the riverbank becomes at tent city alive with winers and diners and the delectable aroma of shashlick being cooked over open fires. Fragrant with coriander, I found them impossible to resist. Though this meal ended up costing a bit more than I intended, it was also one of the best I had in Russia. 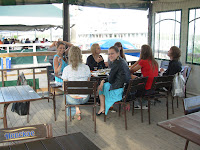 Revellers on the Riverbank


Had also intended catching the night train to Tomsk, but that was not to be either, as all the tickets were booked out, so I spent another night in the somewhat sleazy "Yenisey View Hotel" where my room looked out on a junkyard. Them's the breaks. One night it's First Class, the next night you are on the dog, but had a lovely day the next day wandering around the town and visiting the nearby Stolby Reserve before finally catching the train. 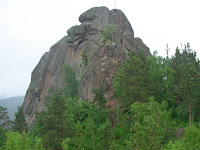 A Stolby, one of the impressive looking volcanic plugs in the park just outside Krasnoyarsk 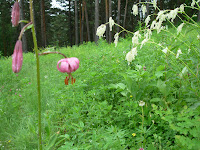 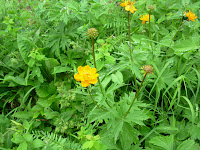 The wildflowers were stunning too

Many thanks to all my boat friends and also the lovely family who sheltered me from the rain at the Stolby Reserve and shared their food and tea.

PS Do a thorough tick check after you have been in the reserve. They carry encephalitis!
at October 07, 2010

Those are truly stunning wildflowers!