Weird and Wonderful Places around Perth - Fremantle and the Coastal Towns 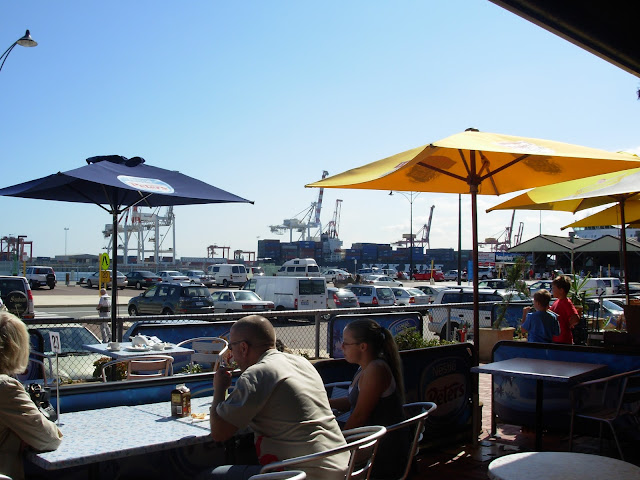 The Port of Fremantle
The Port of Fremantle  or ‘Freo’  about twenty minutes drive west of Perth is everyone’s favourite.  Originally settled in 1829, only three years after Albany, it has many grand C19th buildings and remains a busy seaport. The smell of the sea is in the air and a whiff of distant shores. It was the last place in Australia to be seen by soldiers heading off to war and by my sister when she headed off on her first trip to Europe in those pre - jumbo jet days.
There are ramshackle industrial buildings and vessels of every kind – enormous container ships, fast catamarans, fishing vessels and yachts, even an old square rigged sail training ship, The Leeuwin. It is also the jumping off place for day trips to Rottnest Island and for trips upriver past the homes of the rich and famous.
Once the first glimpse of Australia for most migrants, the sea of different faces and the range of ethnic food, suggests that many never left, adding to both the colour
and flavour. The meals here aren't pretentious or elegant, just honest, filling, cheap and tasty. My sister and I had  generous plates of Indian food chased down with a fresh strawberry smoothie. 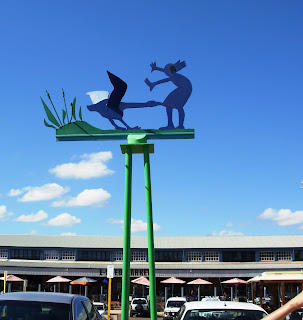 E Shed Number 4  where the markets are
The markets here have been going since 1897. E Shed has a higgledy -piggledy market crammed full food stalls, cheap clothes and tacky souvenirs like the hat a friend bought that proudly declares “Perth, Queensland” (wrong state!). 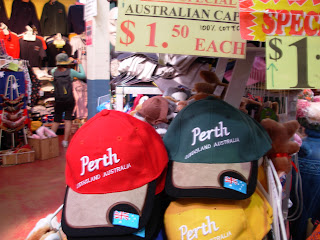 Great Hats! Perth is not in Queensland! 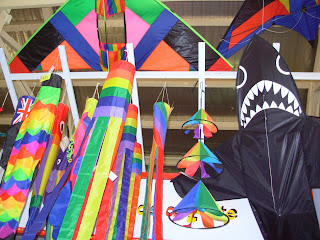 Kite Stall in the Market 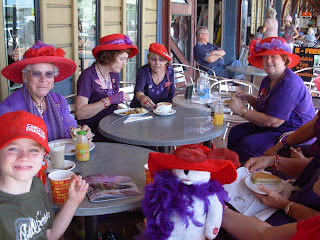 The Red Hat Ladies enjoying themselves
You can also catch a quaint hop - on hop -off tram here that takes you to all the sights but haven’t done that yet, as it was a bit too expensive though it’s probably a great way to see the town. We did go up to the Round House, the original prison until 1899 and probably the oldest stone building in WA, having been built in 1830. It was another place from which Moodyne Joe escaped despite having his tiny cell reinforced with railway sleepers and iron bars. Underneath is a tunnel used by whalers. The newer old prison  is also an interesting place with many ghost stories - haven't done that yet either - and the old Lunatic Asylum is now an Arts Centre. We should have seen a lot more of the town with its wonderful Victorian architecture, but somehow never made it past the cafes on the wharf.
C.Y. O' Connor of pipeline fame is commemorated here too, as his work clearing limestone bars and widening the harbour made it suitable for big ships. 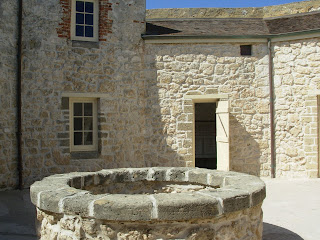 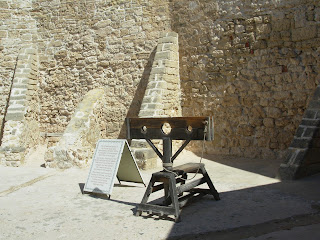 Inside the Round House, WA's first prison. It was round because it was modelled on Jeremy Bentham's Panopticon, where one gaoler can observe many prisoners -a very modern concept at the time.
Though many of its warehouses are now expensive apartments surrounded by galleries and up –market restaurants, Fremantle retains both its historical and archetectural integrity. The original Goal still looks down sternly from its hill and the cannonball still drops daily to mark the time for seafarers. 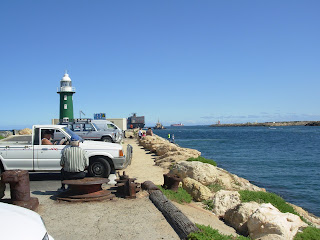 A big container ship leaves the Harbour
Other litttle places along the coast
Rockingham and Mandurah are the much touted tourist destinations along the coast, but all I could see were acres of retirement villages, chain stores and flocks of motor launches. Going north there are three fishing villages which have retained a bit of their original character.
Two Rocks with  its big pub, small fishing boats and a giant Sculpture of King Neptune presiding over the park above, looks like the sort of place where you might still get a decent serve of fish and chips and people still sit on the wharf and dangle lines in the water - much more laid back than those frenzied new subdivisions where you have to go miles inland  to find a shop which is then most likely to be an anonymous Woolworths surrounded by the usual suspects.
Seabird, a little off the road further North,  is like this too - a sleepy little fishing village now, but be quick as it is soon to have a new road and then the developers will kill that too. It is set on hilly country between dunes and has a pub, a shop and a post office and some very nice loos which shine like a beacon on the hill. The man in the cafe which serves really excellent hamburgers can't wait as the fishing industry has been in decline for years. Get it while you can, before the incredible sunsets and the azure swell of the Indian Ocean are privatised.

Lancelin, the end of the road and a bit further from Perth still looks like a proper seaside town too, a place where you might take the family for a relaxed weekend.  There's a big sweep of blue ocean and a protected lagoon with islands and bird sanctuaries. I particularly liked that the cottages were still modest and unpretentious. Beyond it lies a land of startling dunes which have probably saved it it from further development so far.
Email Post