Apologies for the break in transmission. My sister has just launched her second book and of course I just had to stop and read it. More about that shortly, but for now I just want to tell you about Milford Sound while it's still relatively fresh in my mind.

Much as I hate to admit it, Milford Sound proved to be better than I expected. Even if you don’t get to see anything else but Queenstown Airport, you should go and see this. Rudyard Kipling called it the 8th Wonder of the World when he called by during his 1891 visit to New Zealand. 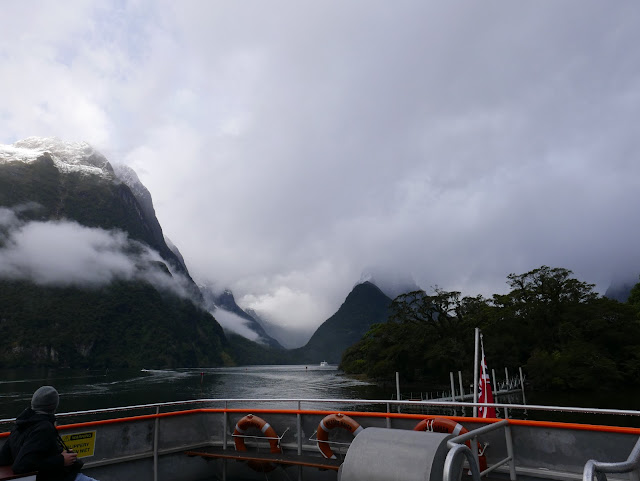 It turns out that Milford Sound, and for that matter Doubtful Sound, are not sounds at all but fjords, though the terms are often used interchangeably and both refer to large bodies of water that penetrate far inland. You would probably have to dive beneath them to know for sure, something those who named them probably could not do, but the very steep evenly carved sides here do provide a clue. They have been produced by glaciers, making them fjords, not sounds.  Sounds on the other hand are drowned river valleys which the sea has filled as it has risen in post glacial times. Tasmania’s Derwent River is a typical example of the latter. Were you to look at the river bottom, you would find uneven ground where water has sought the path of least resistance, whereas the ice in the fiords  would have carved themselves a smooth ”U” or “V”  shape  as we’ve seen around Mt. Cook. The word Fjord comes from an Old Norse word meaning crossing and which also gave us the root for ferry and fare, so blame the Vikings and take your pick. New Zealand prefers to use the Fiord spelling.

Fiordland has fourteen fiords, though only two – Milford and Doubtful Sound, are accessible to the public, unless you fly or travel by boat. Milford is the shorter of the two at around 15 km in length and can be reached by road, whereas access to Doubtful Sound requires an additional cruise and a bus ride, making it both a longer and more expensive trip.

There aren’t many of us yet as we board the ferry – maybe thirty or so, but I can see designated parking for at least forty five buses and several other cruise boats getting ready for the arrival of the coaches.  It’s moody, grey and drizzly as we set off – not uncommon since it rains 200 days a year, but the cruises run every day, regardless of weather.  It’s always wise to carry a raincoat and wear layers. Some sunblock never goes astray either. My photos are dismal in consequence, but you can see excellent ones on any tourist brochure or website. Try Dangerous Business,  not only for better pictures, but also re costs for different types of cruises and a comparison between the two Sounds.

Sheer cliffs soar upwards into the clouds and make the other boats look like toys. For some reason I think of Jack and the Beanstalk and imagine giants occupying the upper reaches.  They do, but they are made of granite and wear snow white caps. They send down gigantic waterfalls, their size only becoming apparent as we pass alongside.  Where the Sound narrows, a gale rips through the gap and most passengers huddle inside where the heavenly aroma of coffee permeates the cabin.

Towards the end of the fiord, the cliffs dip down and the rainforest- like vegetation becomes more lush.  Suddenly there’s an announcement. “Yellow Crested Penguins on the left!”
Everyone lurches to port. Endemic to New Zealand, these small penguins are now only found in the south west. They look slightly taller and slimmer than Tasmania’s fairy penguins and are mostly white, with a distinctive yellow crest. With their rather awkward upright posture, they bob around on the rocks beneath overhanging bushes and hurl themselves into the sea. As the captain remarks, "I suppose if they are going to get wet anyway, they may as well go fishing."  It's very likely that they have young to feed and it may be why they look a bit on the thin side.

We are now almost at the end of the Sound. White caps signal the start of the Tasman Sea and it looks rough out there.  As we turn around and start travelling back along the opposite bank, a colony of juvenile fur seals (kekeno) can be seen basking or jostling for position on the rocks.  Protected since 1978, their numbers are now increasing after being almost wiped out by Europeans in the 1800s. In 1986 the whole of Fiordland was recognised by UNESCO as a World Heritage Area.

As I look back, a magnificent rainbow appears just above the water and it is soon followed by a second one. The bit of sunshine transforms the landscape. It loses its dark and brooding qualities and starts to look like the tourist brochures. We nudge close to the highest waterfalls – the 146m (479’) Stirling Falls. The boat rocks. There is too much spray to get a decent photograph. Some skippers are known to fill glasses from these waters, but given our somewhat late start, I suspect we are rushing a bit so that the boat will be back on time for the twelve o’clock cruise. That’s when the first buses from Queenstown arrive.  We also take a closer look at Mitre Peak whose precipitous cliffs rise a stunning 1692 m (5555’) straight from the water. Lastly, we stop by the Lady Bowen Falls (162m or 555’) named after the wife of one New Zealand’s first Governors. They are very powerful, so powerful that they generate enough electricity to power the whole township of Milford Sound - permanent population 120, visitor population- about 2,000 per day.


The buses start pouring in as I leave.  It’s no use stopping in Milford Sound, it’s much too busy. I make one more stop -at the Chasm, a place where the river has carved its way through rocks in spectacular fashion, then it’s back to Te Anau, so that I am in position for the long journey to Doubtful Sound in the morning.