The Badlands –The Rock and Pillar Range


When I told the Mayor of Oamaru back in Haast, that I was planning to come back via Middlemarch, he was horrified. ” Why would you want to do that?" he asked. "There’s nothing there.”

I must confess that that was at least part of the attraction. I imagined fairly flat ground and little traffic – perfect for covering a lot of ground fast. I was right about the second part. The second reason I wanted to go this way –was that since I couldn’t do the Taieri Gorge Rail Journey  (and couldn’t afford it either), I would try to see as much as possible of it along the way. The train journey takes in incredible grades, crosses 16 major bridges and has at least three curved viaducts.  The viaduct over the Taieri Gorge is the largest wrought iron structure in New Zealand and has both the tallest and longest bridge on the line. Well, I would do the next best thing and drive out to Taieri Gorge 11km off the highway.

The first part was impressive – rising up from the coast over switchbacks until you could see far out to sea.  Although gorse is an introduced species and a noxious weed in Australia and New Zealand, it did look quite lovely here in all its golden glory.  At the top at 1450 metres above sea level,   I am greeted by a post -apocalyptic landscape of bizarre rocky outcrops. This is the Rock and Pillar Range. Hot in summer, cold in the winter, it seems at first entirely devoid of life, yet a few creatures do make their home here. Sheep graze on greener parts between tors and pillars.  Skinks bask on the rocks, a bird of prey hovers overhead and New Zealand’s curious Mountain Stone Weta, (Hemideina maori,) a large flightless cricket whose Maori name means “The God of Ugly Things,” lives in the crevices.


Large quantities of gold were won in this area between 1890 and 1895 and during World War I there was also a sheelite mine here. Tungsten made from sheelite was used in the manufacture of electric lights.  The rich Otago gold finds of the 1860s led to the decision to open up the region by building railways to make it easier for farmers to move stock and get produce to market. Although the railway was begun in 1879 the difficult terrain coupled with a depression, made for slow progress and the line did not reach Middlemarch until 1891. The next phase, interrupted by war and the Great Depression meant that the line didn’t get to Cromwell until 1921. Alas, road transport gradually overtook rail transport. In 1980 the rails were removed between Clyde and Cromwell to make way for the Clyde Dam and the line between Clyde and Middlemarch was removed in 1991.

My detour takes me over several rail crossings and many potholes, until at last I end up in what  appears to be private property, the aptly named “Barewood Station,” without ever coming to anything which looks like a gorge. It turns out that some of the rocks I've been photographing have also featured in "Lord of the Rings."

The train line meanwhile, had stopped some kilometres back at a little station called Pukerangi, meaning rock and sky in Maori.  When reach it again, there’s a white minivan parked there. The driver, a tour operator, tells me that you can only see the gorge by train and that the train should be here in twenty minutes or so.  I’m really excited and head off to try to meet the train at the terminus in Middlemarch, the next little town, which was supposed to be very attractive.  As I leave, several more mini vans and one large bus squeeze past me as I head back to the highway. Looks like it's all happening in Pukerangi. 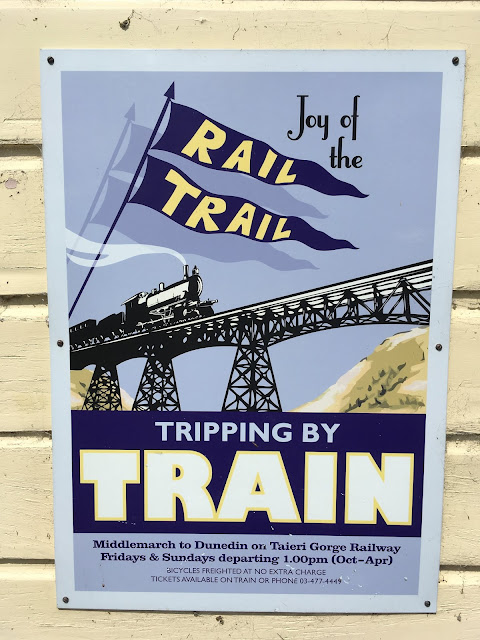 It seems that I got that spectacularly wrong. On Thursdays the train only goes as far as Pukerangi  and the large bus I met on the road was taking people from the train to Middlemarch.  Nevertheless, Middlemarch is a nice little town that has moved with the times. Although it still has its original  station, it  now serves a large contingent of cyclists. There are rental and repair shops, tour organisers, food stops and accommodation facilities all geared towards bike riders. This is because after much work and fund raising by the Otago Central Rail Trust and the Department of Conservation, the old railway route has been converted into a pleasant 152 Km Cycling and Walking trail which opened in 2000.  During the 2018 -2019 season alone, some 15,000 people had already completed the entire trail, not counting those who only did short rides or used the trail to commute. The Central Otago Rail Trail is by all accounts not too hilly, so you don’t need Tour de France skills to do it. It has breathed  new life into the little railway towns along the way and preserves a fascinating bit of history. 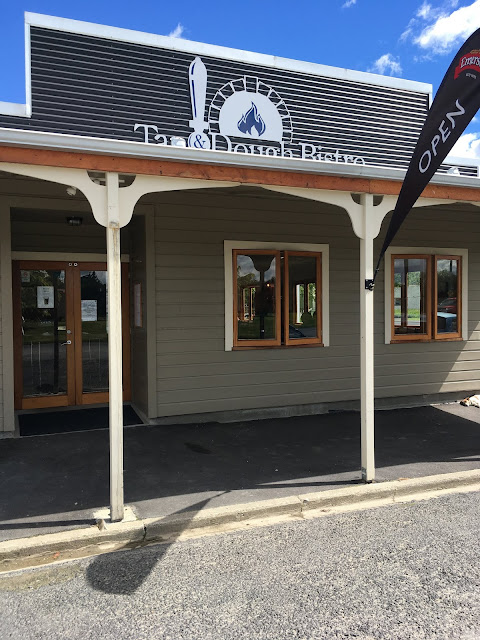