The traffic picks a bit when I hit the Dunedin to Queenstown Road near Ranfurly.  Up to now the most I’d encountered was the odd minivan pulling a trailer to take cyclists to a trailhead. Now there were fast moving trucks and slow moving campervans competing for limited road space. Beyond it the surreal landscape continues - rocky tors interspersed with dry gulches and fringed by snow covered peaks which look like rows of well -formed teeth. Expansive and seemingly timeless, it induces some kind of time shift wherein mere mortal concerns such as being late for a rental drop off, seem rather irrelevant.

Though I am officially still in a hurry,  I can’t resist the small detour into St. Bathans. My thanks  to  Jon,  whose excellent See the South Island blog inspired many of my  travels in New Zealand, for putting me on to this. (Looking forward to reading up on the beaches for my next visit!) .

Gold was discovered in these parts by one Gabriel Read in 1861 and by Christmas of that year, despite the cold, 14,000 miners had converged on Central Otago. They came from all over, mainly from the UK and Europe, but also from the Goldfields of Victoria and California where the gold was beginning to run out.  Over 2 million ounces of gold were extracted in 1867 alone, according to conservative estimates , at first by simple alluvial panning along the rivers, then by dredging, and finally by hard rock mining into the quartz reefs.

Picturesque St. Bathans was settled by Scottish miners from the island of Iona,* in 1863 according the Cyclopaedia of New Zealand (1905). It offered “a dry and invigorating climate” says the same source, and boasted around 2000 citizens in 1887. Many of its mudbrick buildings such as the Vulcan Hotel (1882) and the Post Office (1909) not only still stand, but are still in operation.  Its famous blue lake was the product of extensive digging, which had obliterated 130m Kildare Hill by 1864 and resulted in 168m pit by 1933. Since it was by now encroaching on the township, digging was stopped and the lake was allowed to fill with water, its blue colour coming from the minerals within it.
Between the signage and the photographs it’s not hard to imagine what the place would have been like in its heyday – first a tent city, with shelter  made from anything to hand – canvas, tin, rock, even gin cases, then bustling shops, thirteen hotels, banks, a dance hall,  a police station, the billiard room, the all-important Telegraph Office and so on.  This is “Deadwood” Country, just like Bendigo or Ballarat in Victoria, or Skagway in Alaska.

[*Others say Wales, but looking at the origin of the various bank managers and the fact that the original St. Bathans lies over the Scottish border, I am going to say Scottish. The Scottish sport of curling is also big in these parts, with St. Bathans having its own rink and club as early as 1867. Most likely people came from everywhere, with a few nationalities predominating. I’m pretty sure though that only Scotsmen would have survived that “invigorating climate”].

By 1870 people started drifting away to new fields, though gold production by hydraulic sluicing continued until 1934. As the Central Otago News wrote in 1948, “... Gone are the dancing girls, the numerous hotels, the banks, the hundreds of diggers… but St. Bathans is not gone. No,it is a town – a very small town – blessed with glorious sunny days, star -lit nights and rich in hospitality and so it remains.”

A little place nearby called Drybread which now only has a cemetery, tells a different story of harsh toil, accidents and isolation, as do the lonely graves at Miller’s Flat one of which is dedicated to “Somebody’s Darling” and the other to “The man who buried Somebody’s Darling” (Alas, I don’t have time to visit either today or Alexandra, but I do have an extension on the car).

I also stop in at two other former mining towns, Ophir, and Clyde.  Ophir also started with a gold strike in 1863, but this time by Irishmen. In 1875 its name was changed from Black’s Diggings (the name of the landowner on whose land gold was found) to Ophir after the fabulous gold mine owned by King Solomon. When the railway bypassed the town in 1906, it looked like the end of Ophir, but its very obscurity coupled with the dry climate, enabled many of its buildings to survive. The local schist stone here was put to effective use in buildings such as Pitches Store and the Bakery (1880s), though mudbrick and tin were also used. While the nearby town of Omakau on the opposite bank of the Manuherikia River has stolen its crown and become a modern tourist hotspot, I prefer the quiet charm of Ophir.

Clyde (pop, 1161 in 2018),  a little further along which dates its fortunes from 1862 when Irishmen Hartley and Riley found gold, also has a number of charming buildings, most of which were built of grey schist and thus its streetscapes have survived  better than most. Originally called Dunstan, it was renamed in in 1865 and was once the largest town in New Zealand.  Erected above the site where Riley and Hartley found gold, is a little plaque, faded now which speaks for all these towns.

It should not be forgotten either that the gold won in Otago also briefly made Dunedin the largest and richest city in New Zealand. 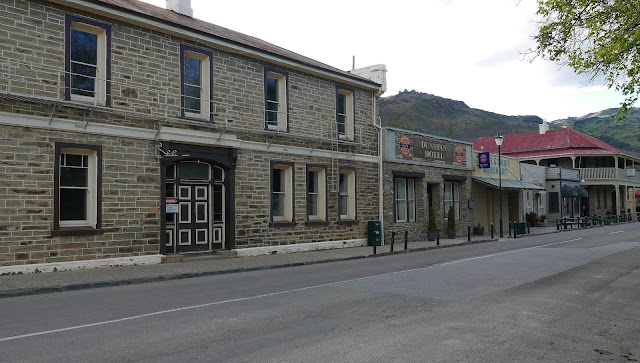 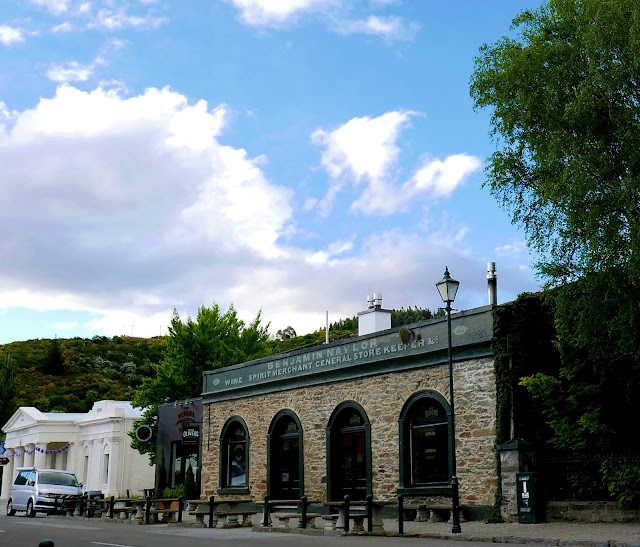 At dusk I drive through the spectacular Kawarau Gorge and stop in briefly at Cromwell (pop. 5150, in 2018) on Lake Dunstan. While Cromwell also owes its existence to mining, its ongoing prosperity may have more to do with its fortunate location at the crossroad between the Lindis Pass, Queenstown, Wanaka and Haast, and the roads to the South and East.  Although its original diggings at The Junction where the Clutha and Kawarau Rivers met were flooded when the Clyde Dam was built in 1993, its charming buildings have been relocated to a historic precinct on the Lake at the southern end of town. Even the heritage roses have been replanted here, along with descendants of very early walnut and almond trees. Today the area is famous for both its stone fruit and its vineyards. If you were very quick i.e. by 29th of December, you could still make it to Cromwell's Cherry Festival and take part in its cherry stone spitting contest.


Alas, it’s too dark to see anything after that but having gotten a reprieve on the car, I sneak off to Glenorchy in the morning and then return to Kawarau Gorge again on the promise of one last waterfall –Roaring Meg, before I have to turn the car in.


Both places are also Lord of the Rings sites and stunning in their own way, but I must say that after seeing so many huge and beautiful waterfalls, I am a bit disappointed in Roaring Meg.  It’s basically a hydro outfall - a pipe pouring water down the side of a cliff, though the stream itself is a churning maelstrom with that characteristic ice blue of mountain waters here. At Nevis Bluff, highest point on this part of the road, men are halfway up the rock face, drilling and blasting potential rockfalls. It’s an image that stays with me -men/people struggling against the forces of nature and how puny they look against these towering mountains.

That’s pretty much the end of my New Zealand travels. I wish I could have done more of the walks, but I fly out in the morning. Now that I’ve seen the lie of the land I already have lots of ideas for next time, if only there were other ways to get there besides having to fly. There were a couple of other things that I wanted to mention such as almost all the hostels being very environmentally conscious – recycling, conserving water, separating out compost and the newer ones, e.g. Te Anau, having motion sensor lighting and sockets for recharging electric vehicles. I also wanted to write about conservation in New Zealand and how I was a bit shocked by the amount of poisoning going on. Perhaps I’ll write something about that in the New Year. For now, I hope I have given you a taste of some of New Zealand’s amazing, wonderful and very diverse landscapes and wish you all

a safe and wonderful Christmas and
a fantastic New Year


PS.  A big welcome and many thanks also to the US firefighters (and their families!) who have come to help us too. It’s already been a terrible summer for a lot of people. If you want to offer more than thoughts and prayers to the families affected, including those of  the fire fighters who have lost their lives here are some links:-