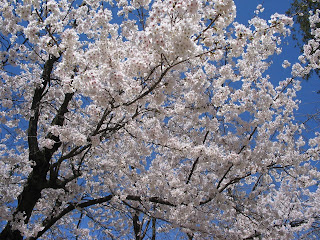 One of my first excursions was to Mt. Gyeryong. The snow had almost gone, but there was still plenty of ice along the tracks. I had to smile at first, as there were coffee machines every four hundred metres and portaloos, yet people were equipped with the latest in mountaineering equipment. Still, two kilometres can be a very long way in the mountains and by the time I was halfway to the top, it was getting dark and I had to be 'rescued' by a party of young men who insisted on not only escorting me safely down the mountain, but feeding me as well. The next time, I really did make it all the way to the top, passing the ancient and venerable Brother and Sister Pagoda on the way. Can't imagine how they got those stones up there, especially over the 'chicken ladders' which have signs saying "Caution, fallings and slippings.' 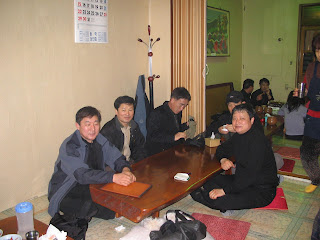 Dining with my rescuers. Despite their apparent reserve Koreans are a convivial bunch. There is no such thing as paying for yourself, 'going Dutch' or filling your own glass. They find it extremely odd that I am travelling alone. I ask my students who would they want to go on holiday with and it is not their friends or Brad Pitt. The answer is invariably "with my family." 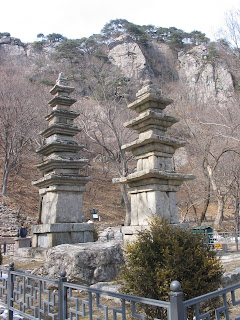 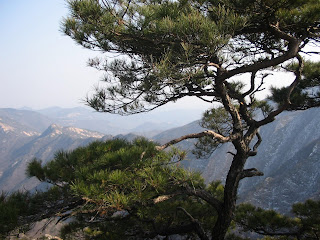 View from the Top of Mt. Gyeryong
I had hoped to see the first Cherry Blossom Festival at Jinhae on the other side of the country, but this festival was washed out, something which was to happen often during the fickle spring weather. Instead, I called in on English teacher 'Bruce' at Masan who had given me a lift down the mountain after visiting Seongoksa temple, the one with the golden Buddhas. I was made very welcome by his sister and her family. They took me to restaurants and museums and showed me around this attractive town which is modelled on Canberra.
Their friend, the lovely Vivi, also taught me how to make Korean pancakes which became one of my favourite dishes.The recipe is very simple. Just throw lots of of sliced long green onions into a bowl, add anything else you like, then throw in a couple of eggs and a little flour and fry in a large pan. 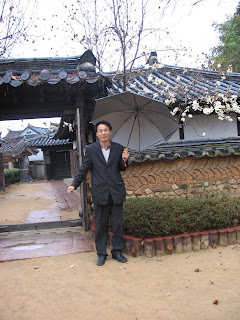 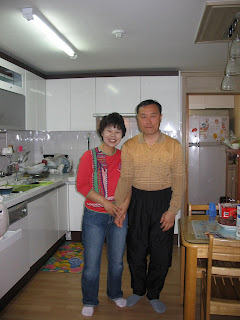 Nori and her husband 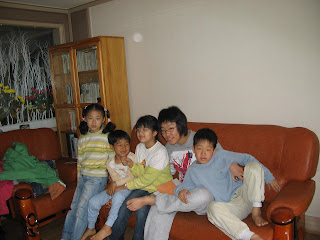 Nori's Children Patty, Bomnur and Sky, and two of their cousins.
I hope I have this right. Despite all those name games, my memory is appalling and the ink in my little book has run.

About a week later when I was in the mountains in the next town, there just happened to be a small Cherry Blossom Festival in progress. It was a perfect day. People were out in droves - picnicking. Bands played, children painted and a colourful shamanistic procession was in progress. 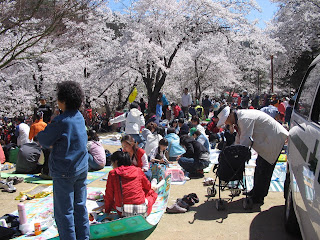 Spring is welcomed all over the country 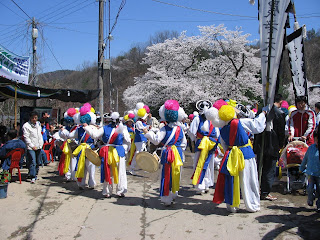 Shamanistic Procession at the Cherry Blossom Festival
By now I had mastered the Express Buses and decided to to pay my first visit to Seoul. Seoul is a city of ten million and it was a bit daunting with all the high rises and subways, but I need not have worried. There are almost a million 'foreigners' in Korea, most of them in Seoul, and Seoul is well serviced with English announcements in the subways, English speaking cabbies and lots of maps, tourist information booths and toll free numbers. Dozens of people a day come up to me and say "Where are you from? My name is... Pleased to meet you." Although this may well be the end of the conversation, they can usually decipher my map and tell me where to go or better still, physically pick up my things and walk me there. It's too easy. I am appalled that I haven't learned more Korean yet.

Ugly though the high rises may seem at first, high density living makes for short commutes and means that the mountains which cover 75% of Korea, are untrammelled by buildings other than evocative temples. The flat lands are mostly given over to intensive agriculture, much of it in greenhouses, which makes Korea almost self sufficient in food.
This doesn't leave much room for flower gardens, but by now forsythia and wild purple azaleas are blooming along the roadsides and even the humblest cottage has pots of flowers and vegetables somewhere, if only on the roof. Within the city, there are several ancient palaces and parks to provide much needed green space, though I didn't really begin to explore these till later. The orchards with their flowering trees trained into bowers made a pretty sight along the way. 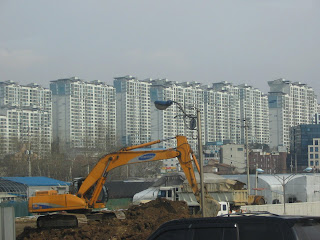 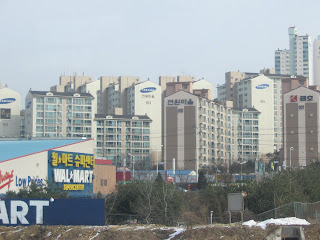 High Rises on the way to Seoul 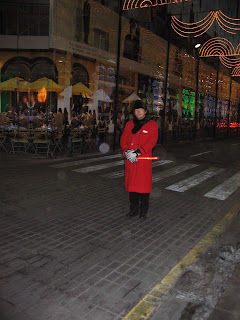 A friendly doorman at the elegant Shinsegae Department Store, Seoul

There are some fabulous markets and stores in Seoul with prices much cheaper than in the country. You certainly can't complain about the service. As soon as you go into one of the department stores you are mobbed by at least three assistants, who bow and insist on serving you, whether you want anything or not. It was great to come across a Starbucks after three months of drinking tiny cups of coffee made with sweetened coffee sachets. (My daughter has started sending Red Cross parcels of Nescafe). Naturally, the various Mc Burger chains are all here, as are Dominos and Pizza Hut. No wonder Koreans think that this is all we eat. As I pass food vendors' alley at the market, the spruikers outside each establishment change their chant to "Special school teacher's menu!"
The express buses are a real Korean institution, travelling cheaply all over the country. I suspect that like the train drivers, their drivers see themselves as "pilots on the ground." They are always smartly dressed and usually wear white gloves. Some of them are real characters. (Would someone please tell the one that has deep philosophical quotes and plants all around his bus, where his picture is, as I didn't catch up with him again). One such quote says, or so I am told, "Beautiful is the man who loves a mountain, but the man who loves his fellow man is more beautiful still." 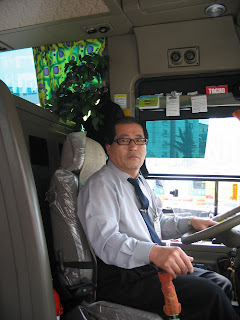 The buses themselves are extremely comfortable, with layback seats and incomprehensible television that stalls every time you go through one of the many tunnels. Unfortunately they stop rather early, so you might find yourself stuck in some cheap love hotel for the night with a round double bed and mirrors on the ceiling. 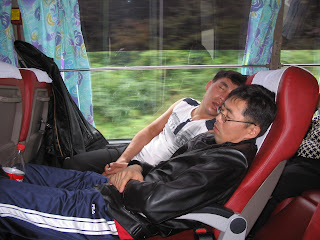 The buses are very comfortable

Don't even think of driving a car here. Apart from driving on the wrong side of the road, I suspect all Korean drivers of being certifiably insane. They squeeze themselves down crooked lanes where a cat's whisker wouldn't fit. If the other cars don't get you, then the traffic jams will. And don't think you are safe as a pedestrian either. Motor cycles drive on the footpath and pedestrian crossings do not mean the same thing as they do at home. They must say 'Human Target Zone' or something.

The road laws go something like this. Buses may intimidate everyone. Taxis may intimidate all other drivers. Other drivers may intimidate motor cycles and motor cycles may challenge cyclists and terrorize pedestrians. There may be some subtleties I have missed, such as big, shiny black cars may take up the entire width of a footbridge and anyone selling produce, cacti, bedlinen or any of a range of unlikely goods, may take up to three lanes of traffic.
On sunny days, even quite important access roads will have large expanses of chilli spread out to dry.
Nor is it unusual to be run over by other pedestrians carrying enormous loads on their backs, especially in the markets, where there are often 'people jams.' Women carry considerable loads on their heads, including trays of food and carefully balanced crockery.
Given the general chaos, I am surprised that there are not a lot more accidents. Perhaps years of installing circuit boards in microprocessors, means that you can tell the difference between a nanonth of a micron and two nanonths when squeezing into a parking space. In Seoul, there are no spaces between parked cars at all and cars have big mirrors mounted on the rear.

You will have noticed, that I have dropped "The Land of Morning Calm" from the Header. It isn't, except perhaps on Solnal, when the shops close and people stop to play games. 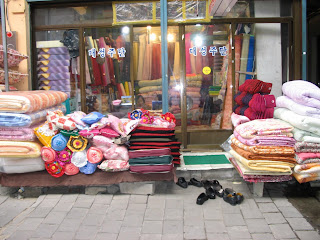 It is not polite to wear your shoes inside in Korea, not even in restaurants or shops.
The ladies in this manchester shop in the market are playing the card game Go Stop, with its pretty little flower cards. I know because they invited me in. No doubt they are also doing a bit of gambling. Koreans can't bear the thought that I can't go home to my family. 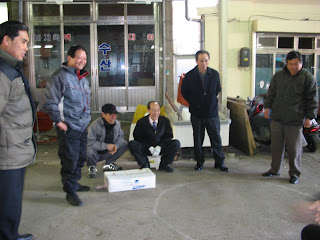 The men play the traditional game of Yut No Ri. This is also a gambling game. Some of my students gave me this game as a farewell present and taught me how to play it just before I left. I was quite shocked that my polite, mild mannered students could be such ruthless players. Needless to say, I lost. Now if you have a few dollars, I'll show you how this game works.....
Another curiously Korean institution which you find in every town and village, are the whimsical wedding palaces. Some are decorated with cherubs and trumpeting angels. Others have minarets and onion domes and maybe Disney Cutouts. A few have all three. It is here that hundreds of quickie weddings are performed each day. My favourite is the one with the red turrets in Gongju which has a sort of fairytale quality to it. 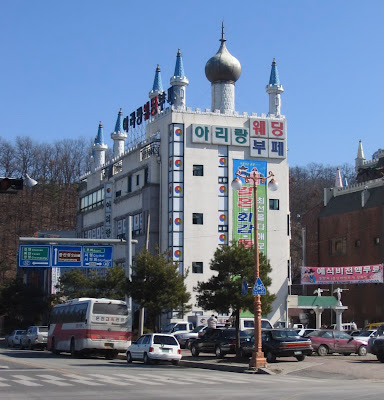 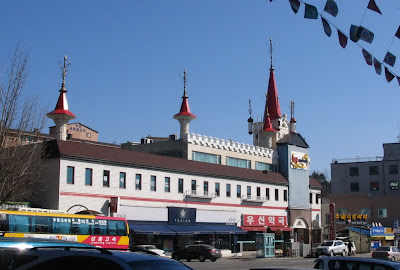 My favourite wedding palace in Gongju