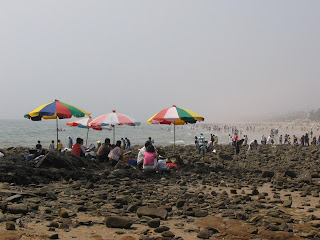 It's hot and it's humid. The aircon at the school works overtime, people fan themselves with small round fans to move the turgid air, which all seems like too much effort to me, and the ladies of leisure now play Go Stop under the bridge on the Jemichon to keep cool. I can't imagine what the wet season will be like as I have been rained on so thoroughly, so often already. Ross drops in from China. Election fever is in the air, and no sooner are they over, than Soccer season - The World Cup Series -begins. The students now look even more bleary -eyed than usual because it doesn't come on until 4 a.m. 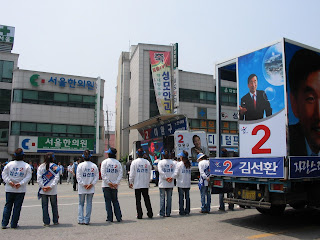 Election Fever in Gonju. This is a form of theatre in which all candidates have their own cheer squads and drive about the streets with music blaring, giving speeches to anyone who will stand still long enough
Soccer Fever
Soccer here is a national obsession. I've never been a big fan of spectator sports, much less on television, but it's different here. The whole country is involved and it's impossible to sleep anyway. There is a hardly a child in the school or in the streets who isn't wearing the familar red and white t -shirts or sporting red devil's horns, trademarks of the Korean team. In the parking lot beside the apartment, the neighbours have rolled out a wide screen TV and cheerily invite us over each night to watch. Their exuberance is impossible to resist. One of them acts as a cheerleader and we lustily repeat "Te Ha Minguk" or the national anthem at regular intervals, while the grocery shop owner under our block of flats comes out bearing platters of barbecue chicken and endless bottles of pale green Soju. It would be impolite to refuse. Ah what personal grief and national mourning when Korea is trumped by the Italians in the semi finals. I am not sure what the Korean is for "The umpire must have forgotten his guide dog" but the utterances were I suspect, very close.
Day at the Beach
Ross spends his break fishing, going to the museums or coming down to the school for a while to tell the children about China. They appreciate having a new face around for a change, but do not seem to be all that interested in other countries. They are however, totally fascinated by the hair on his arms. At the weekends, we head off to the mountains or the beach to cool off.

Daecheon Beach, Korea's longest at 3.5 kilometres, is well patronised at the weekend and as usual, I hear " Hello teacher!" as soon as we arrive. It is a seafood lover's heaven. All along the foreshore are literally hundreds of restaurants displaying various kinds of living marine life. Though there are quite a few formal restaurants, most are simple affairs of canvas with plastic chairs (see below) and braziers set into the tables. For $30 Ross buys a kilogram of assorted shellfish - scallops, razor shells, abalone, oysters and things I have never seen, and has a Korean BBQ. Seafood gourmand though he is, even he can't even finish it all.
There are of course, any number of other dining options. Down on the rocks, women sit under their umbrellas, cutting up raw octopus and bright orange sea slugs and serving them with chilli sauce and possibly a cold beer. In the evening, we ride a crazy roller coaster at a small fun park and watch fireworks being let off on the beach. 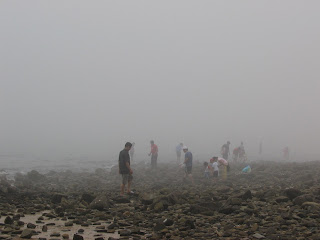 No, these people are not looking for their car keys in the fog, they are looking for shellfish. 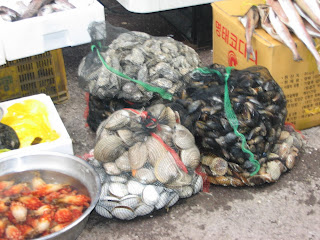 Korea is a seafood lover's heaven, particularly near the beach.
Those are sea slugs on the left.
The following weekend we are off to World Heritage listed Gyeonju (no, that's not Gongju, or Cheonju, Jeonju, or Gwanju, though it is sometimes spelled and pronounced Kyeonju). Situated on the East Coast, Gyeonju is remarkable in that it has a series of huge grave mounds right through the middle of town. It also has the biggest and oldest temple. This was the other half of the Two Kingdoms that came together in Gonju, when the last Silla queen joined with the Paeke clan. You can also visit the fascinating observatory she built for watching the stars.
One of the nice things in Korea is that admissions are not very expensive, so all cultural assets are heavily patronised. Huge numbers of school buses can be seen at any time outside any one of them, as Koreans take great delight in their heritage. There is also a lovely grotto in the mountains here which was a great refuge from the heat of the day. What I liked most though, was the townscape itself. The houses with their tiled, ornate rooves are beautifully preserved. No wonder Gyeonju is called "the museum without walls." 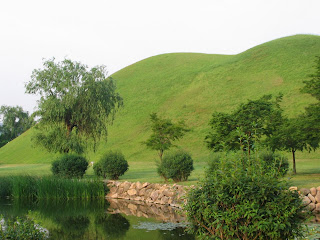 Magnificent tumuli (historic graves) of the Silla Kings, right in the middle of Gyeongju

We also visited Andong, a little to the north, which is called "the museum without a roof." This is much smaller and less grand than Gyeonju, but it is the site of a venerated Confucian Academy and the centre of the mask dances - a combination of satire, drama and dance which has a long tradition in Korea. Nearby is Hahoe, a 600 year old traditional village, the only one that has not been destroyed by invaders at some stage, and which was much praised by Queen Elizabeth during her unexpected visit there in 1999. Here the houses are more rustic with unpainted pisé surfaces and thatched rooves, though equally well maintained and set in a pretty "S" bend on the river. The mask dances are Intangible Cultural Property #69. The local Soju in Andong is Intangible Cultural Property #12 and the yellow hemp cloth, first presented to the King in the mid -Joseon Dynasty (1392 -1910) is Intangible Cultural Property # 1. The Masks used in the mask dances are wooden and very expressive. You can see the evolution of fine wood carving here as there are also some very ancient shamanistic totems.

[sorry I don't have many pictures from this trip. My camera is having problems again. I haven't been able to get a compatible charger and they use a different system here, but you can see pictures of these lovely places on the web]

Some Cultural Differences
One of the more perplexing things to a foreigner in Korea, is reconciling Korea's keen interest in the past, with its headlong rush into future. Perhaps the former is a consequence of the latter. Korea has more pishbangs (internet cafes) per head of population than any other country, more cell phones and more internet connections. It has not been called "the most wired country in the world" for nothing. Meanwhile, 300 bookshops a year are shutting their doors and the government is running a pilot program for internet free days in schools.
There is no doubt that Koreans are hard workers. Sick days are practically unheard of. No one stops because of the 'flu. They just wear blue face masks, a scary sight when I first saw them. Recently, when Samsung began to introduce the five -day week, they had to run special programs for their workers so that they would know what to do on the extra day off. Korean television has community service announcements urging fathers to spend more time with their children.

I am also rather shocked at the widespread use and acceptance of corporal punishment in schools because it has long been banned in Australia . At one school I visited, a teacher was administering 'bastido' to a student who had not done his homework. The student, minus his shoes was kneeling on the floor, having the soles of his feet beaten with a cane. The students are philosophical about this. In a debate which we had about it later, my older students said things like," The teacher who hits you, does it because he loves you and wants you to succeed," or "one rotten apple spoils the batch."
On the other hand, everyone was shocked when I sent a disruptive student out of the classroom - common practice in Australia when a student stops the rest of the class from getting on with their work. There were outraged calls from the parents, earnest talks with the directors and the tearful student never returned to class -the exclusion was only supposed to be for a few minutes or possibly the rest of the lesson - because of the extreme loss of face. It was a sharp reminder that just when I think I am starting to get to know Korea, there are indeed cultural differences and outsiders will probably always be 'foreigners."

These are not necessarily criticisms. The whole point of going to other countries as far as I am concerned, apart from looking at different scenery, is to discover different ways of doing things and different ways of looking at the world and to challenge our existing way of thinking. If there were no differences, we would learn nothing and there would be no point in travelling. 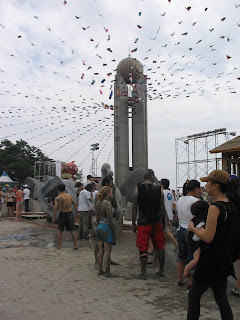 On a much lighter note, by mid -July things get even crazier, with the beginning of the Boryeong Mud Festival. This weeklong orgy on Dacheon Beach attracts over a million visitors. From the sound of the accents around me, 'foreigners' are well represented, with about a 3: 1 ratio of US servicemen to English teachers. Everyone is in excessively good spirits.
When you first get there bouncer -types try to put you into the Mud Prison. This is for people who look too clean. Blue mud people emerge from pools and slides.There is a Human Mud Sculpture Contest in progress, a photography competition and an unrelated shamanistic performance further down the beach. The Mud King Contest is eagerly awaited because it carries a three million Won prize (Don't get too excited, that's about $AU 3,000) and there are prizes too, for a Mud Marathon somewhere far down on the tidal flats. 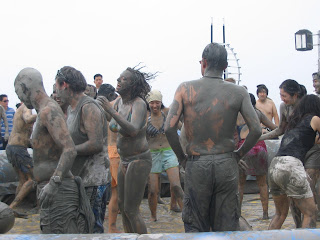 It's all good clean fun and a chance to let off steam, if you don't mind getting a little dirty.
In the evening, all the seafood restaurants are busy and all the hotels are full. The beach rocks to the sound of a huge concert and at the end, a spectacular fireworks display lights up the night sky. 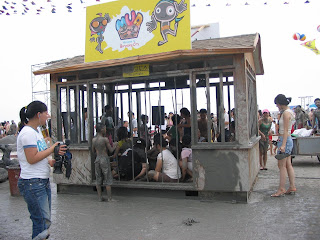 It's Mud Prison for those who look too clean 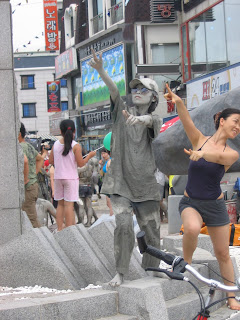 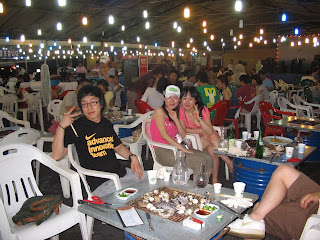 Typical Korean Restaurant with BBQ in the middle of the table.
Why do all young Koreans give you the Victory sign when they see you taking a photo?
Next morning it's raining, so I opt for an only slightly less public wallow at the Boryeong Mud Skin Care Centre. The mud is said to contain many trace elements and have rejuvenating effects. I am still waiting.....

When Daecheon isn't hosting the Mud Festival, it is a busy port for the nearby islands. My sightseeing mission to Sapsido island isn't very successful as the monsoon breaks and the rain hammers down the entire time I am there. Thankfully Kim Kwangsik and friends, students from Seoul cram me into their already crowded van and take me to the other ferry terminal at the far end of the island or I would have been soaked and stranded there all night. They also give me an umbrella which goes on to do sterling service on sundry other disastrous missions.

On the news that night, I hear that Typhoon Ewinar (Indonesian for Storm God) has wrought havoc all over the peninsula. Eighteen people have been killed and five hundred homes in Seoul have been flooded. Aid is being sent to North Korea where the damage is much worse. 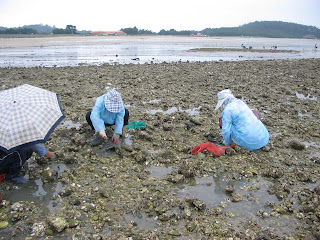