The Missing Year - Of Dog Days and Hungry Ghosts 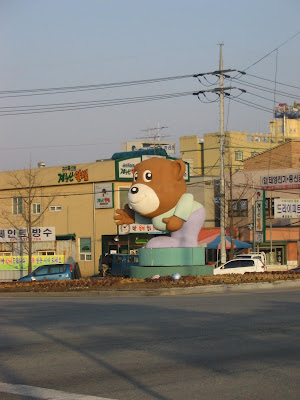 Queensland may have its Big Banana but in Gongju, Big Bear welcomes you as you come into town

Until now, like the sound of the crickets under my window, life has been getting more and more frantic. Suddenly there is a lull and everything becomes much more languid. The Koreans have a special name for this short season -"pognal." Traditionally, dog was eaten at this time of year to give strength and to stimulate the appetite. Although the children assure me that this is rarely done now, I check anxiously each day to make sure that the two golden labrador puppies which have recently been installed in the yard of the restaurant next door, are still there.

Samgeytang, chicken stuffed with ginseng and rice is another popular 'pognal' dish and is supposed to do the same job. (Korea has special foods for each season as well as representative foods for each region). I learn to make it under instruction from the women who sell spices in the market. I don't usually do much cooking, because with so many cheap restaurants and food stalls, cooking for one isn't all that appealing. My latest discovery is acorn jelly. This comes as innocuous brown squares served over mountain greens.
The seventh lunar month is also Hungry Ghost Month, a time when the Chinese do not marry, do not make major purchases and do not go on holiday. This year it is a double Hungry Ghost Month - this happens every four years to bring the Lunar Calendar into line with the Solar Calendar - and this has begun to affect the economy.

Korea has festivals for everything - for celedon pottery, for ginseng, for lotus blossoms, paper, mask dances, cartoons and animation, the arrival of the cranes, jazz festivals, but now there is hardly anything on - even the re-enactments at the Fortress are on hold -except the Gomnaru Festival.
This celebrates the Legend of the Bear and the Ferryman. Bears are important in Korean folklore. Korea traces its history to a relationship between a bear and a human and dates this precisely to 2333 BC when Tangun the ruler of Korea was born, but Gongju has its own legend about bears and they are featured on bridge railings and footpaths all around town and of course, Big Bear as you come into town. 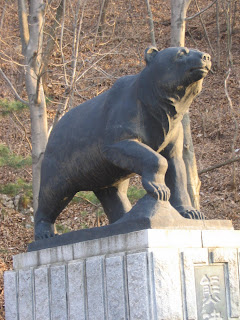 The Legend of the Bear and the Ferryman

Gonju's bear story is about a ferryman who is captured by a female bear goddess. One day, the ferryman escapes across the river. The bear goddess tries to run after him, but cannot bear to leave their offspring. They cling to her and she drowns in the river. There is a big statue near the fortress and a small forest shrine near the river to commemorate this sad story. Once a year it is told in a special park near the great winged Pagoda. It is an occasion for family picnics, food stalls, icecreams and fairy floss, and at night there is a big talent quest. 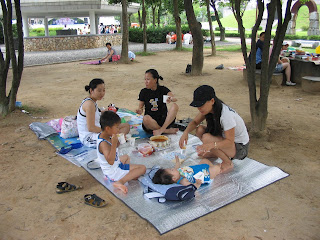 Koreans don't need much excuse to have a family picnic. 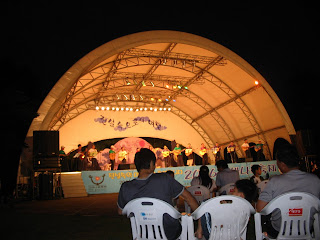 The pishibang and the cinema are among the few places which offer a little respite from the heat. I see Korea's latest Blockbuster "The Mutant." There are no subtitles and I can't understand the words, but the story - a moral tale about a monster emerging from the Han River (the one that flows through Seoul) after a pollution incident, is easy to follow and has a couple of unexpected twists. Where an American film would have the male lead or the government doing the rescuing, here, as in life, it is the family. Seeing familar places, such as the pink bridge on the Han on the big screen, makes the movie somehow personal. New Yorkers must experience this sensation all the time.
I also I see the other Korean box office hit "The King and the Clown." This is an epic film set in Joseon times - a wonderful, witty but tragic tale which gives some insight into the Korean soul. I watch this in a DVD room. I am not sure if DVD rooms are a Korean invention, but it's like having your own private lounge room with a big screen. There's a coffee table and a comfortable couch and Dolby surround sound undistorted by noisy popcorn eaters. I have yet to try a singing room.

Meanwhile, in school, the children are listless, some are away on holidays and one or two are sick. There is no relief from the humidity and it feels worse than Darwin in the wet season, even worse than Singapore, although we are 36° further north. Nor is there any relief at night.

We talk about legends and proverbs. My favourite Korean proverb of the moment is
"Last cow fixes the cowshed." I also like the little homilies printed on the exercise books e.g.

" There can be no rainbow until the storm has passed and remembering this, we gain courage to face the turbulence and stress."

or " Be tolerant and cultivate your garden : that is do with diligence and fortitude" and "Failure teaches success"

Another says, "The habit of reading is to construct for yourself a refuge from almost all of the miseries of life."

I do a lot of reading now. There is a collective sigh of relief as the directors announce that we are all getting six days off. It is then that I escape to the wide open spaces and clear blue skies of Mongolia (See Blue Heaven post in January). Mongolia remains momentarily appealing, except for the fact that next month the temperature there will be 7.6° and the month after it will be below zero.
In the last weekend of August I discover Muju, a popular ski resort in the mountains. I am surprised to find an exact replica of a Swiss village, right down to the wrought iron signs. Muju is also known for its Firefly Festival and prides itself on its clean air and organic produce. This year's Firefly Festival was held early, but I see them everywhere while walking at night. 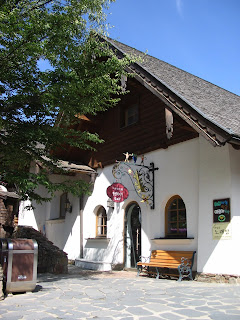 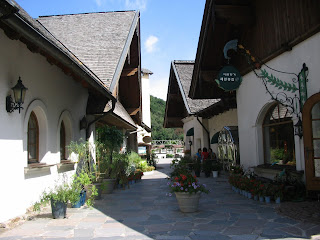 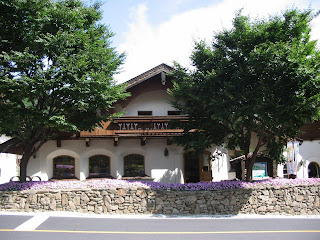 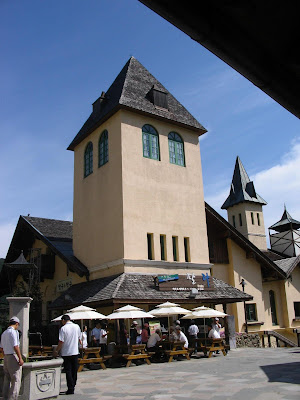 Not Switzerland but Muju, home of the Firefly Festival