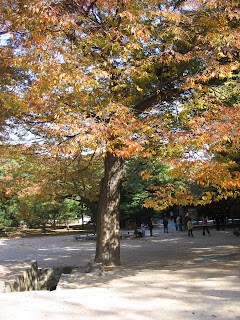 Autumn is without doubt, the loveliest time in Korea, even before the leaves start to turn. Cosmos light up the roadsides, golden rice flows down the valleys like lava. Kimchi pots appear on balconies and rooves and chilli is dried in the streets. The children tell me that autumn is their favourite season because "the sky is high." I think they mean that the inversion layer with its perpetual haze and humidity has lifted. Certainly, the days are benign and cloudless and the nights cool enough to bring refreshing sleep.

How Koreans feel about the fall is eloquently expressed in the following excerpt written by a Korean student at the English Language Institute at the University of Florida, reprinted here with kind permission:

The Story of Fall in Korea

The story of fall in Korea is very important. It is a beautiful array of color, sound, dance and scent.

Even though it is small, there is a beautiful balance in nature of the mountains and the rivers. They shed a sweet scent of abundance and peace. Furthermore, in Korea, fall expresses a great splendor and beauty. It is the best of all seasons.

A lot of color embroiders the whole country and people’s clothes reflect the colors of fall. Every day there is always the splendor of the setting sun and the rice paddies that look like a running gold river covering the whole country because they change to yellow color in the fall.

When one tree in the mountains changes color, it is like a new costume and all the other trees in jealousy change their clothes too.

The rivers reflect the color of the sky which is very bright blue because of the sun. The sky seems very high when I look into the rivers. My eyes hurt from the intense blue. In the fall, it’s almost like the edge.

The sky is a virgin blue. There is never a cloud, and a bird rarely flies into it.

The sounds of the waters in the river valley, the birds chirping, the wind blowing in the mountains and the rolling leaves create a gorgeous orchestra of music.

Sometimes the wind is like a small child playing and dancing with the fallen leaves on the roadside. It runs in a circle stirring up the leaves........ 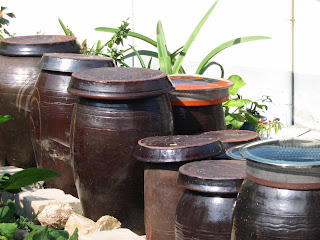 Kimchi pots appear on balconies and rooves. Kimchi is the fermented spiced cabbage which is served with every meal. Ask any Korean what their favourite food is, or what they would miss most from home, and they will invariably answer "Kimchi." 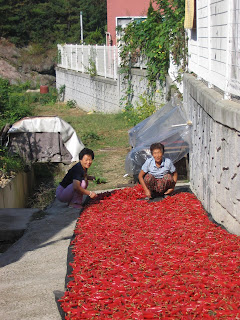 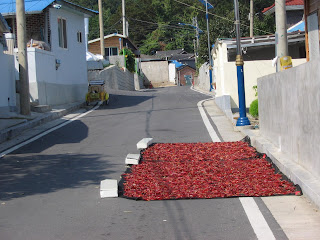 Chilli drying in the street

The festivals begin again, starting with the International Nature Arts Festival in Gongju. The exhibits are made of natural materials and generally have an environmental theme. I am thrilled to come upon the various sculptures in the forest and apologise for not being able to acknowledge their creators. As usual, there are hundreds of school buses and it is good to see disabled children being shepherded around the site as well. 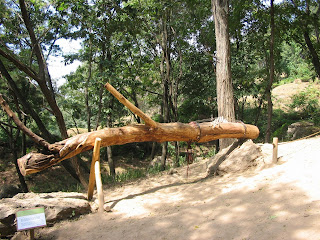 I particularly like this aeolian instrument, modelled on a traditional Korean one.
Around mid - month (October) I spend a weekend at a Buddhist temple. The vegetarian food is superb, but I am a dismal failure at the 108 prostrations which precede the morning and evening meal.
Now it is also chestnut season. Korea is the the world's second largest producer after China, and the woods are full of them. In my pockets, I bring enough home from my walks to have my own harvest festival. We also have a mini harvest festival in school. I still haven't seen any bears, but I have seen two deer, including a baby one, right behind the flat, and lots of trumangi - something like a small striped chipmunk. I continue to be amazed at the way ancient traditions coexist alongside extreme modernity. 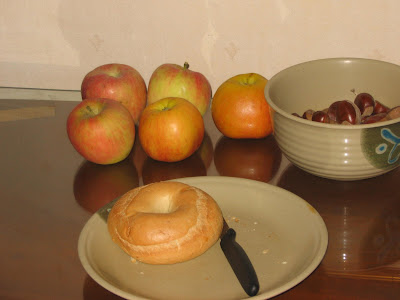 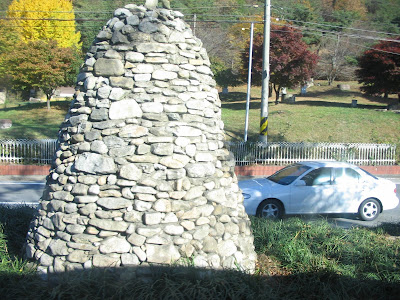 Cars rush by an old stone chimney still used in the countryside to send prayers to heaven. 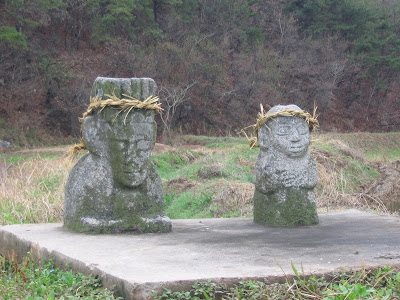 Mountain Gods and Harvest Gods must still be appeased in their season. This small family shrine is in the fields just behind the apartment.

Soon after, rice cakes begin to appear in the shops, and it's Chusok, Korea's Thanksgiving and second biggest holiday. I too receive a red envelope from my boss. These, as every Korean child knows, contain money. Other popular gifts at this time include presentation boxes of fruit or fruit juice and even boxes of Spam. I really like the way gifts are given with both hands in Korea. They are always exquisitely wrapped too. Even the smallest child can make a perfect three dimensional crane or turtle out of a small square of origami paper. 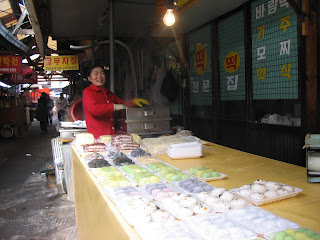 Rice Cakes appear in the stores 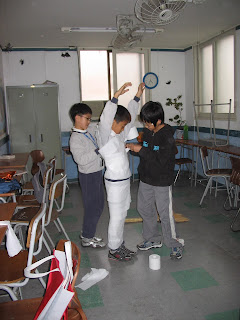 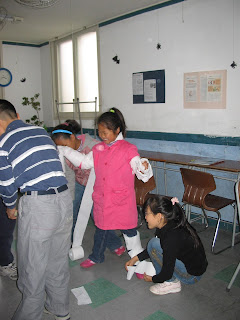 In class, we discuss less well - known Western celebrations such as April Fool's Day - the students love hearing about the BBC's Spaghetti Harvest Festival - Halloween and St. Patrick's Day. We also talk about cultural differences.
When I ask senior students what they find most odd about foreign teachers, they tell me it is the insistence on eye contact because they find it intrusive and somewhat confronting. They say that no Korean teacher would allow his or her students to look him or her directly in the eye.
The hardest part so far, apart from getting the students to actually speak - a few students have left the class because of this - has been to get them to express their own opinion about something. Initially, they would all look through their books to find whatever it is I may have said, that I now want them to repeat. Much Korean English education seems to be about rote learning rules and unrelated words, rather than actually using them.

The thing which younger students find strange, is the way our voices go up and down. In fact, they often mimic me and fall about laughing. Although Korean may sound rather flat and unmelodious to Western ears, you can see from the above quote that it is a surprisingly rich and evocative language, not that I can understand much of it yet, even now. Judy tells me for example, that Korean has no less than seven different words just for the simple colour blue.

I am very interested in the origin of the language and customs, but the children cannot tell me all that much about them. For instance, there is a passion in Korea for piling up stones, which I had also noticed in Mongolia, where the practice is meant to bring good fortune for one's journeys. There were ancient kinships ties with Mongolia, through Chinggis Khaan, and this is reflected in the language which also bears a distant relationship, not to Japanese or Chinese, but to Ural - Altaic languages such as Finnish, Hungarian and Turkish. Lately, I have come across some tantalising older references.

Simon Winchester,* for instance, writing in "Korea: Walk Through the Land of Miracles" (1988; 2004, Penguin) which I have just bought, mentions that in antiquity, Koreans possibly had links as far away as Scandinavia. Is this where the common love of hot springs and saunas comes from, or even the extravagant woodwork one finds in both countries? Or is it simply a matter of diffusion across the great Russian steppes or a logical conclusion, given local resources and similarities in climate?

More recently still, while trying to find out more about the Legend of the Bear and the Ferryman, I have landed on a website about Indo -European languages (Etruscan Phrases, Mel Copeland 1981; in http://www.maravot.com/Indo -European; 9/3/2007) which mentions Etruscan as being an earlier common link which may have extended to Asia. Certainly, they had similar burial practices and there are many ancient dolmens and mounds in Korea. These early Indo - Europeans also liked to pile up stones.

I am intrigued by such questions and would be pleased to hear from anyone with more information re: language, customs, legends or origins. I would also like to add to my collection of interesting place names. You can make comments directly on this blog, although they usually take a while to register on the page. Other feedback is welcome too.

* Simon Winchester also writes eloquently on the aftermath of war, the DMZ and Korea's rapid development, areas which I have not explored very much to date, though I did wonder about the Australian involvement in the Korean War because some Veterans here feel that they have been forgotten and certainly underappreciated by Australians.

Suddenly I am aware that I have only a month left in Korea and I rush about looking at some of the tourist attractions before I leave. Just as there are festivals for almost everything, Korea has hundreds of museums dedicated to just about anything from kimchi and rice cakes to soju liquor, tea, printing, bamboo, bicycles, ceramics, paper, straw and plants, embroidery, Art and Crafts, Pansori and Traditional Music, Film, a Gramaphone and Edison museum, masks, the sea and education, to name just a few. There are also a lot dedicated to historical events such as the war, Independence and even the Olympics. Most towns also have a Folk Museum and, more likely than not, a National Museum containing Royal relics. Fossils, paleo finds and natural history museums are popular too, but alas, there is barely time to see the local ones.
I tell a lie. It does rain when I revisit King Muryeong's Tomb. 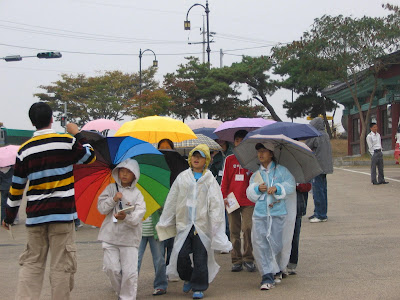