Nepal- A Close Encounter at Chitwan 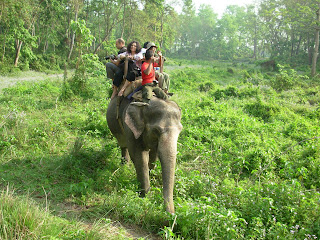 I am front left -long curly hair
By now I had seen most of the major ecosystems in Nepal except the jungle. On the advice of Ramesh my host at Pokkhara, I now pay a visit to the Chitwan National Park also located in the southern lowlands of the Terai. The region is rich in wildlife and home to many endangered species including the Royal Bengal Tiger, Sloth Bears, Leopards, Sambar and Spotted Deer and around 450 species of birds. 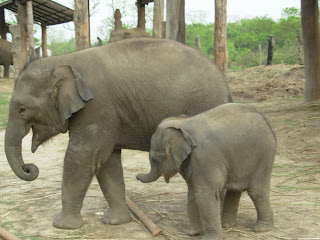 Two young elephants attest to the success of the Government Breeding program. This year there were 28 pregnancies of which 8 ended in stillbirths. The only problem was that many of these pregnancies were due to wild elephants breaking in and not the local stock. 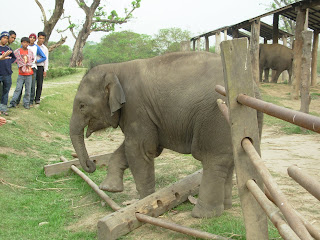 When these elephants are two years old they will be trained to transport tourists around the park.

There are many things to do here, including rides in dug out canoes for the masochistic, jeep safaris and joining the elephants on their daily bath, but time and money are short so after visiting the elephant breeding centre and seeing the evening's performance at the Tharu Cultural Centre, I elect to have an elephant ride through the jungle. 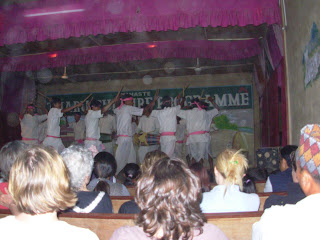 The Tharu are the indigenous people of the Terai. Here they perform the Stick Dance, a form of Martial Art (apologies for the excellent picture of the backs of people's heads).

An elephant is the ultimate all terrain vehicle for observing animals in the wild. Not only do they offer an excellent and safe vantage point but they are amazingly quiet and move through the jungle with ease. 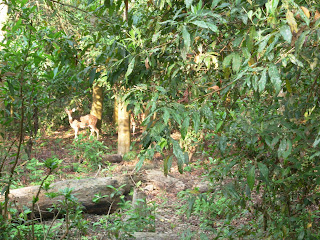 At first we only see a few pheasants and several species of deer - some spotted ones, a barking deer and something which looks like an ibex, when suddenly we come upon a clearing where a mother and baby rhinocerous are grazing.

Another party on an elephant enters the clearing from the other direction. It also carries a party of four plus the mahout (elephant driver). For a moment, the mother rhinocerous looks confused. One possible avenue of retreat has now been cut off. She prepares to charge the other elephant.

Our mahout quietly takes out his rhinocerus hook, an evil looking implement with both a hook and a point. He also carries a hatchet. Then he makes a noise to distract the rhinocerus. For an instant we think we will be charged instead, but the mahout utters a few soothing words and the elephant steps elegantly out of the way. Now the mother rhino is reassured and both she and the baby continue to graze. 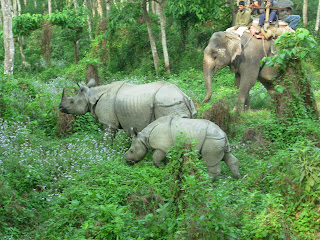