Nepal - In the Valley of the Gods 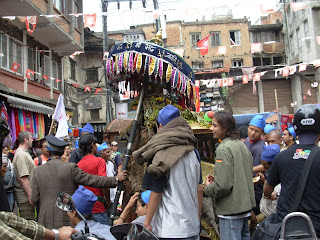 A parade to honour the Gods in the lead up to Nepali New Year in April. This is in Ason, the old market place dedicated to Annapurna, the Goddess of Plenty and the real heart of Kathmandu 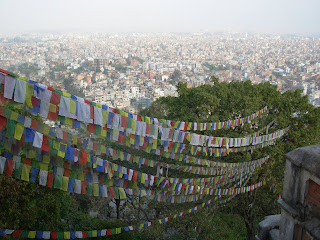 View of the Kathmandu Valley from the Monkey Temple. One and a half million people live here and the population is growing at around 4.5% er annum. Much of this is due to inmigration from the surrounding countryside as rural communities are much poorer.

Nepal is my third kingdom in as many weeks. It too is about to have elections - the first since 1995 when civil war broke out because of government corruption. After the restrained orderliness of Bhutan, Kathmandu is a real assault on the senses, a riot of colour, smells and noise.

Incense wafts from shops and doorways. Amid the roar of the traffic, the blare of car horns and the cheeky chirrup of rickshaws it is not uncommon to hear sacred music or the clack of prayer wheels. Pedestrians compete with bicycles, hawkers, musicians, beggars and sacred cows on the narrow streets and there is almost always something on, be it political rallies, Maoists on motorcycles or religious celebrations of various kinds. During Divali I am alternately showered with water or red powder every time I step into the street. 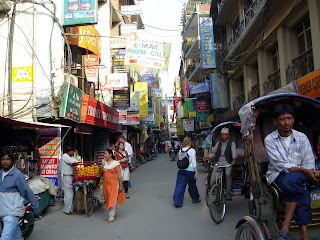 This is part of Thamel - the tourist central of Kathmandu - a confusing collection of lanes where all the trekking companies, coffee shops, hotels and souvenir shops are.

Nepal sells its hydro electricity to India. In consequence, there are two scheduled power cuts daily of four or five hours each, plus quite a few unscheduled ones (Tasmanians please note). For this reason when you arrive at your hotel at night, the receptionist gives you two candles. It is a miracle that the whole place doesn't burn down. You also get quite used to having showers in the evening because in the morning the water is sure to be cold unless your hotel has instantaneous gas water heaters or generators but these are likely to be much more expensive that the one I was in. 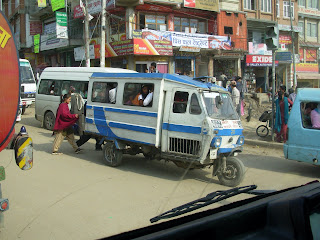 This is an electric rickshaw. Previously I had never seen one of these outside of Mr. Bean. Nepal has lots of these. Slow they may be, but at least they are cheap and non polluting.

It is said that Kathmandu has more temples than houses. I would believe it. There are temples everywhere - small ones, large ones, some occupying hilltops others tiny niches in walls or even trees. There are no skyscrapers here either but this is not due to any royal decree, but because of the risk of earthquakes. 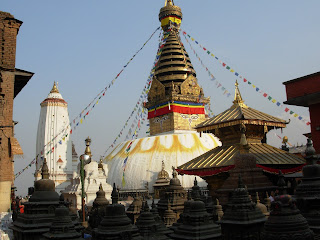 Monkey Temple - This is one of the more famous ones. It is set on the hills which surround Kathmandu and makes a spectacular sight as it catches the first rays of sunlight in the morning. Health Warning: the steps leading up to it will give you a heart attack. 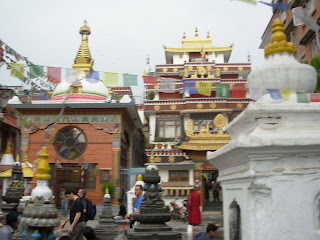 More Temples: In Kathmandu's Durbar Square Hindu and Buddhist Gods alike are worshipped. A very similar collection of historic temples can also be found in the Durbar (royal) Squares of Pattan and Baktipur (see below). 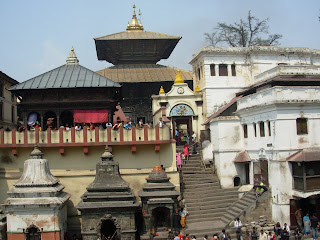 The Golden Temple at Pashupati - a mecca for Hindus who must visit it at least once before they die. In front of it is an older temple still used for animal sacrifices each October. It was the only one spared by the earthquake of 1934. 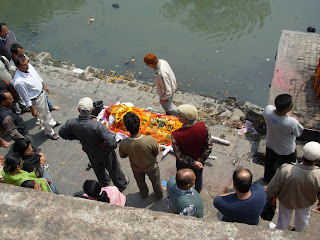 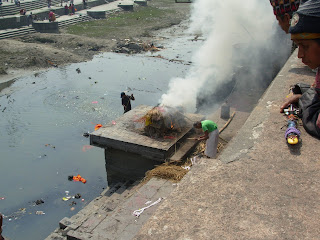 In two hours, the ashes will float down the Bagmati River to meet the Ganges.
Death is a cause for celebration rather than mourning. 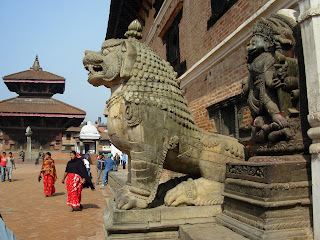 More temples. This one is part of the group in Dubar Square at Baktipur a well preserved, historic town just out of the city. Notice the difference in air quality.

All templed out, I opt for some low level trekking in the mountains. This necessitates a seven hour trip on the local buses. The rule of thumb appears to be thus. Take the logical capacity of any vehicle and double it, then stack about half as many people again on the top.
The job of the jockeys is most important. Not only do they stack and pack and solicit more fares in each town, but they have to let the driver know by beating on the roof, when he has safely cleared any other buses and trucks. 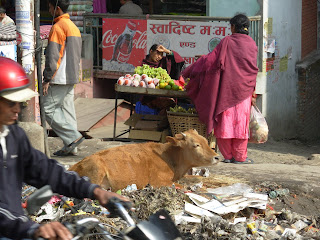 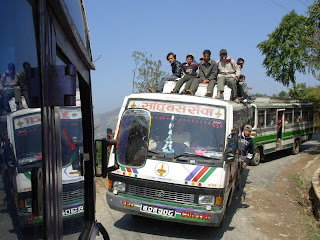 A stand -off between buses on a mountain road. One of us will have to back up to a wider spot so the other can pass

If I thought the roads - and I use the term loosely- were bad in Mongolia, that was kindergarten compared to those in Nepal. At least the roads in Mongolia were flat, whereas these are vertical and much narrower to boot. There are landslips and washouts and many places where the raillings have broken away. There's a reason for all those Buddhas on dashboards. The good news is that at pitstops there are more trees along the road than in Mongolia.

The 'foothills' are higher than the highest mountains in Australia. Along the way I look anxiously down from razor back ridges to see if there are similar buses to the one I am on lying in the ravines like there were in Bali. Not so. Perhaps metal is too scarce here to leave lying around, but I tell myself it is because the drivers are much more careful. I am surprised that thousands aren't killed on the roads here every day.

Fortunately there are few private cars but plenty of motor bikes and enormous gaily painted trucks. On any uphill section many of these trucks will be stalled with their bonnets up. The bonus is that occasionally you get glimpses of a snow covered Himalaya in the distance and you do get to know your fellow passengers rather well. At lunch time the bus stops at a rough truck stop and everyone eats dahl baht (the national dish - enormous quantities of rice with vegetable curry and a thin lentil soup) with their fingers. A man with a large pot comes by to refill anything you have eaten until you can't eat another thing.

In the countryside women are little more than beasts of burden. They plant the rice, carry water from the village fountain and huge loads of wood, bundles of bamboo and sacks of rice. The men plough with oxen and wooden ploughs.

By evening I am sick as a dog - temperature, runny nose and a headache. A warm shower would be nice now, but no such luck. There's only a standpipe out in the yard and the thought of lugging my pack up a mountain for seven hours a day for the next seven days fills me with dread. Going back down is the lesser of the evils, so the next morning I get back on the bus. Groan. 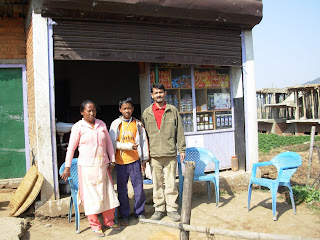 Danebat to my hosts at the little guest house in Trisulla. Raju, on the right in this picture is a trekking guide