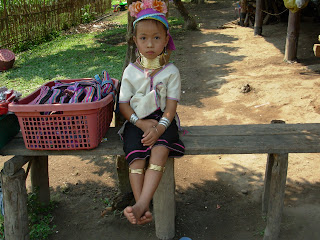 After Nepal, Bangkok is thoroughly modern with its skyscrapers, freeways and late model cars and buses, but it's peak tourist season now and a sweaty 39oC. The place is full of Aussies escaping the winter and who probably got the same cheap airfare that I did. The only hotel room I can get is a box with no windows and a very noisy airconditioner. I am not looking forward to spending my last two days here so in the morning I take a VIP bus and head for the hills.

The roads are excellent and there isn't much traffic. Although the countryside is green and has attractive flowering trees it is also extremely flat and becomes quite boring after 700 km. Chang Mai is a beautiful city and not just because I have spent twelve hours on a bus. Streets, buildings and bridges are lit up and there is a scent of frangipani in the air. A huge night market is in progress and there are lots of places offering excellent, inexpensive food. 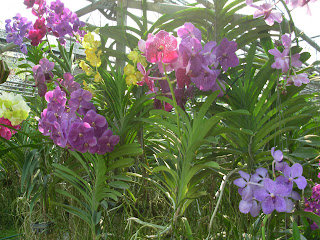 Lavish display at an orchid farm

In the morning I am off on the back of a motorbike again. A mini bus group tour may have been slightly cheaper but it would have included monkey and snake shows, more temples and elephant rides which would all have required additional entrance fees. I am also getting that been -there, done -that feeling. After a brief stop at a beautiful orchid farm which grows its own butterflies we continue up the mountain to a Hill Tribe Village.

The Hill Tribe Village seems a bit contrived. It has been built by the government and is a bit like a living Museum - a human zoo -as one writer put it. It is also rather expensive but it does save several days trekking in the mountains and the money supposedly goes to the communities. The guide is a member of the White Karen. As he tells it this is a vast improvement on the days when the government literally persecuted the hill folk. From 1992 onwards they were no longer allowed to burn the jungle in order to grow food because of fears that this practice was responsible for deforestation. However, when they came to the cities to try to find work, they met with discrimination and were harassed by authorities because they did not have ID cards. 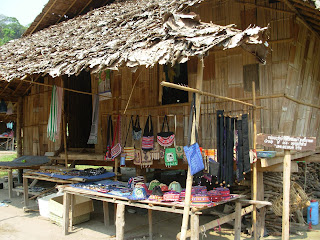 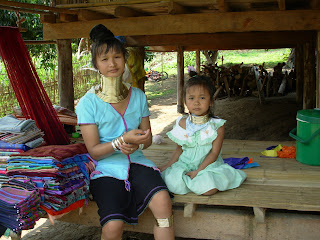 The first rings are put on when the girls turn five. According to the guide they were originally to protect them from tigers. I am not sure about the boys. I didn't see any. Perhaps they have all been eaten by tigers.

Representatives of six major tribal groups including the Hmong, the Lahu, the Lisu, the Palong, and three different Karen groups occupy houses in the village and practice their traditional forms of craft and agriculture. Their value to tourism revenue has been recognised but I wonder out loud what it's like having visitors photograph you all day and poke their noses into your house. The guide introduces me to members of his family. They certainly don't look unhappy. They share their meal with me - crispy fried chicken skin, fish and rice and tell me that they love being here. The guide says the women just enjoy coming here to gossip. 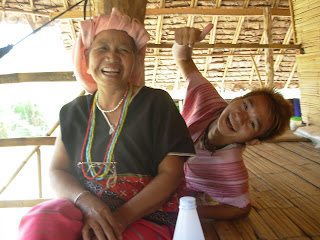 Lunch with members of the White Karen

The houses are simply constructed of timber with rattan walls. They have large open verandahs where most living takes place and airy spaces underneath like Queenslanders. Because it does get cold at night, the hearth is in the centre of the house. Above it are shelves for pots and pans. In one house there are posters of pop stars on the wall. I assume that it belongs to one of the teenage weavers. I imagine that for the young, life here in this ethno eco-agricutural village probably holds more appeal than living a completely isolated traditional life in the hills. There is a small school here and a church is being built. While older women and girls weave, the young ones play a game like Jacks with stones. Interestingly, an Argentinian woman tells me that the same game is played there and beats the little girl at the game.

For a totally different view of Karen life, read the story by
Antonio Graceffo in the Asian Sentinel (07 May 2007) http://www.asiasentinel.com/index.php?Itemid=34&id=482&option=com_content&task=view 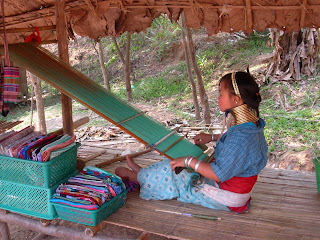 Afterwards I am shown around various craft workshops near Chang Mai, starting with the Umbrella makers and finishing up with Jewellry and Leatherwork. The workmanship is exquisite but my budget rarely runs to souvenirs much less these rather pricey items. It is fascinating to watch them being made but what really thrills me is how beautifully everything is presented. A furniture display is not just a furniture display. Whether it is the silk factory or the umbrella workshop, there are water gardens and refreshments, shady nooks and graceful artwork, just as there were at the orchid farm. 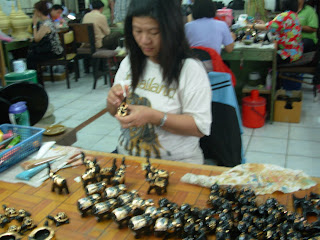 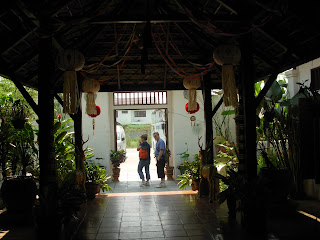 The whole process from the cultivation of silk worms, to dyeing and weaving to tailoring and can be seen on the premises. Beautiful silks and ready to wear items are for sale. 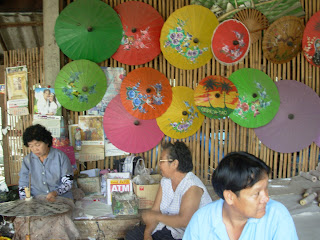 At the Umbrella making Workshop
Here the entire process from splitting of bamboo, to making the paper to decorating the end product can be seen on site. 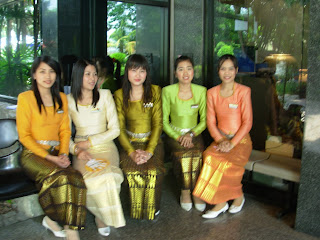 Charming hostesses at the Jewellry and Gemstone workshop. However, no photos may be taken inside this glass and concrete Aladdin's Cave
We finish off with a temple or two near the old sunken city and finally there's just time for another Thai massage at the blind masseur's guild, before catching the all night bus back to Bangkok. Blind masseuses are an excellent idea in principle I think, though this particular massage does not involve taking one's clothes off. It is in fact a form of ritual torture which makes you forget whatever aches and pains you had originally.
Email Post