Nepal - In the Footsteps of Siddharta 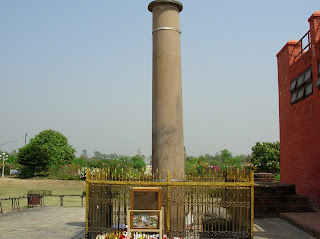 This ancient tower in the Secret Garden at Lumbini 700 km west of Kathmandu, marks the place where Siddharta, later Lord Buddha, was born.

I felt a vague compulsion to visit this part of the country because a famous uncle wrote the well known book about Siddharta which was later made into a film. After a long journey on numerous unsprung buses and an involuntary stay in Siddhartanagar, I finally arrive at an unprepossessing collection of villages.

Lumbini is in the Terai which is hotter and flatter than the rest of Nepal. The people here are quite different too and have long wanted to seccede. Here the women wear saris rather than the loose trousers and tops which women wear elsewhere in the kingdom. They look like red hibiscus flowers as they work the fields. Many of the villages have small blue mosques topped with Islam's crescent moon indicating that much of Nepal's 15% Muslim population is concentrated here. The rest are Hindus and Buddhists. Occasionally you see elephant shrines in the fields. 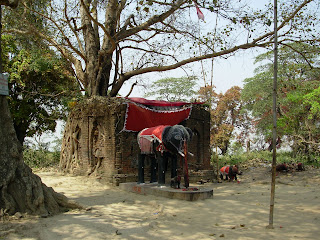 A tiny elephant temple in a fig tree

Most houses and barns and even storage vats in this region are made of simple unrendered pise. Large birdhouses feature prominently on the rooftops because birds, particularly cranes, are regarded as sacred and as bringers of good luck. Woe betide the family that eats the eggs, they will be plagued by sickness and misfortune and in the event that they should they kill one, they will be cursed for many generations. 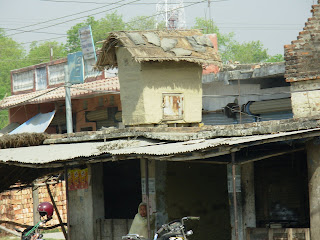 All the rooves have birdhouses 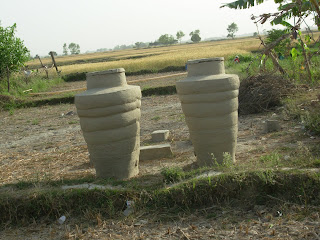 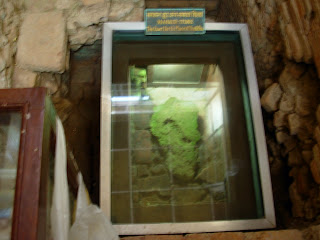 The exact spot inside the Queen's palace where Siddharta was born

Beneath prayer flags, pilgrims from many lands listen to the words of Buddhist monks beside the pool where Siddharta's mother bathed before he was born

A little further on you come upon the unexpected sight of dozens of fabulous temples built by Buddhist nations including Thailand, Vietnam, Tibet, China, Myanmar, Brunei , Cambodia and India. Austria and France who have Buddhist communities also have a presence here and Germany has a research centre. There are also monasteries, nunneries and meditation retreats here. 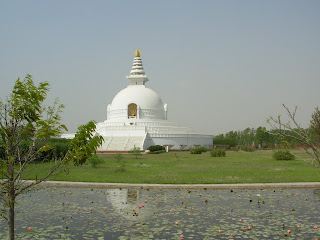 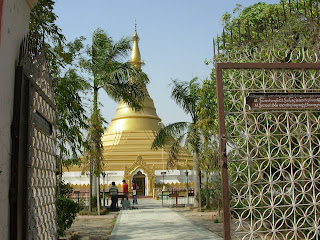 Myannmar's Golden Temple
Just two of dozens of splendid buildings in this region
Some 60,000 tourists and pilgrims come to view these every year, but although they were relocated to make way for them, so far the villagers appear to have had very little benefit from the influx of visitors. 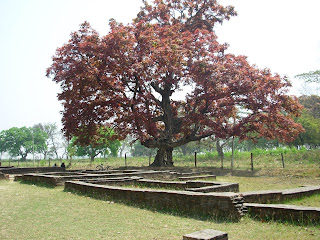 Thirty five kilometres away at Kapilvastu the kingdom which Siddharta forsook at the age of thirty, part of the Royal Palace has now been excavated, along with tombs of the King and Queen. Nearby is a small museum featuring fine ceramics and carvings which were found at the site.
It is here that the young Prince excelled at sports and learned archery. Where his arrow struck the ground, a spring is said to have formed. It was here too that he had the formative experiences that led him to become a mystic. Although sheltered from the world, he did once see a sick man and also witnessed a funeral and thus began his quest to find out the cause of human suffering and to provide relief. 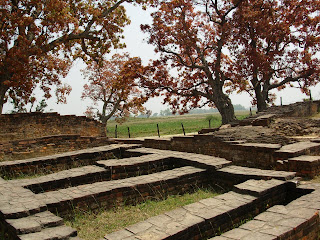 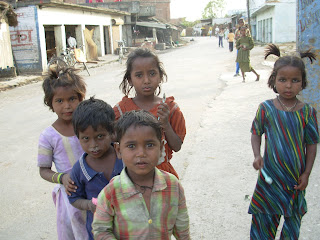 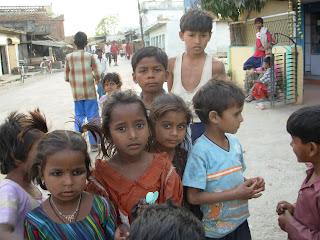 I am not sure exactly what the story is with this empty village just outside Lumbini. It was built either by the Sri Lankans or for Sri Lankans some time ago, but has not yet been handed over to the people. No one seems to know who is responsible for it. 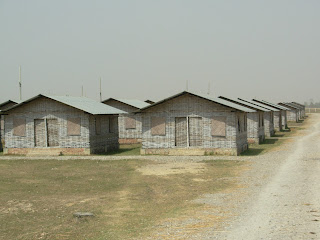 Things are very different in Chitwan Royal National Park some 300km down the road towards Kathmandu. The villages look freshly swept, the clay houses look well maintained and there are flowers and gardens. A school has recently been built by foreign NGOs. Village culture is kept alive through public performances and continued ownership of elephants used in safaris. The small shops and restaurants also benefit. 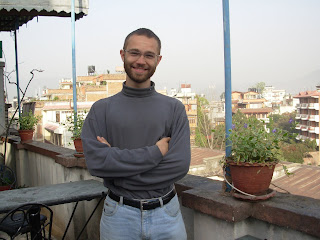 If you see this man, please tell him to get in touch immediately

On a lighter note, all travellers need good angels. Mine was Camillo who not only bailed me out when there was no ATM and no one would take my Visa card, he also looked after me when I was sick. Before I could pay him back, he quietly slipped away without leaving a forwarding address.