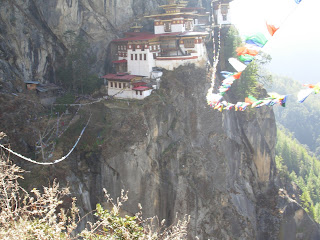 Bhutan, the Land of the Thunder Dragon, is a quaint and chivalrous country about the size of Tasmania, tucked into a fold in the Himalaya just below Tibet. It is quite difficult to visit since it only admits about two thousand visitors a year and both they and their itinerary must first be approved by the government. Most people come in organised tour groups. All charges including airfares are set by the government and no one may travel without a guide and a driver. 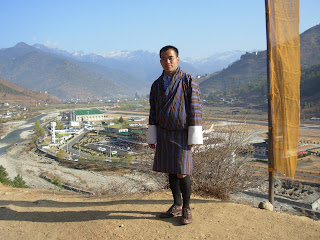 Sonam - The guide. Behind him is Paro Airport, one of the few flat spots and the only way into Bhutan 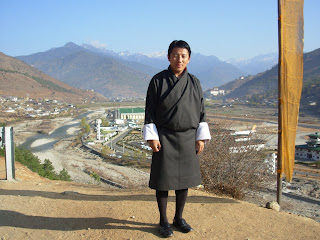 Most men still wear the Gho with it's white sleeves representing the pure heart of the Bhutanese. Girls wear the Kiri, a sort of tartan sarong.

In December 2006 King Jigme Khesar Namgyel Wangchuck resigned from being an absolute monarch and paved the way for Bhutan's first democratic elections. These were held shortly after I left, on March 24, 2008. Not everyone was in favour of democracy, only two parties were allowed to stand and not everyone was allowed to vote, but on the whole, the international community is pleased with the outcome.

Although Bhutan remains one of the world's poorest countries on a per capita basis, it is spiritually and cuturally rich and the King has always tried to govern in the interests of "Gross National Happiness." Thus all Bhutanese enjoy universal free education and medical services and as Sonam proudly explains "No one in Bhutan goes to bed hungry and every man owns a piece of land."

Only one major road snakes through Bhutan's central valley and this is bordered by spectacular temples and Buddhist monasteries. These also serve as district administration centres. Many of the villages can only be reached by footpaths or pony and tractor trails which makes running an election or servicing remote communities a monumental task. 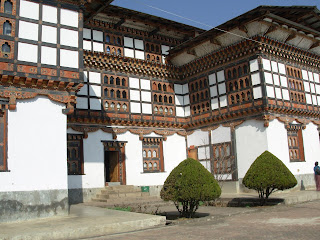 The School of Natural Medicine -Although closed when I called, it shows Bhutan's very distinctive architecture with its superb woodwork, subtle colours and beautiful finishes. Aside from temples and some public buildings, no building may be higher than three stories. 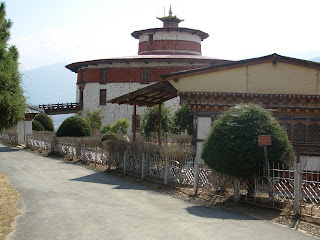 The Conch Shell Watchtower in Paro, an ancient fortress, now a museum 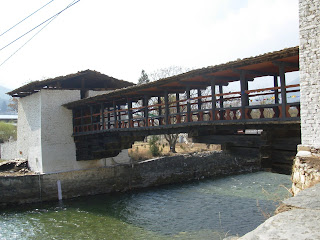 Another Bhutanese innovation - A covered cantilever bridge. This one is in Paro 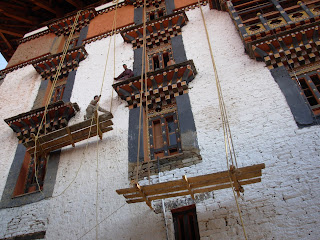 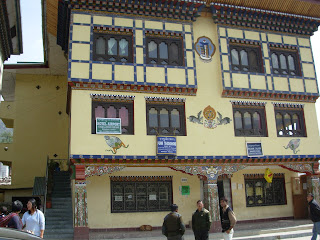 Many buildings have beautiful frescoes 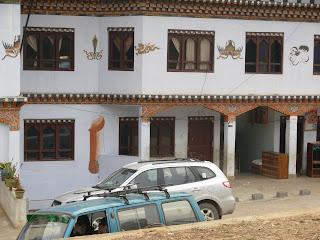 Some frescoes are a little unusual to Western eyes. The one on the left is said to bring good luck and to keep away evil spirits

There is a strong craft tradition in Bhutan which includes metalwork, religious Thankha Painting, textiles, masonry and woodcarving. Meanwhile, at the trades school students learn IT and electrical engineering as well as more traditional skills such as tool making. 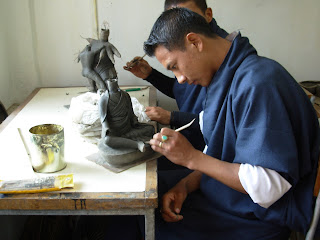 Deep concentration in sculpture class at the Craft School where many other crafts including weaving, dyeing, dress design, doll making, paper crafts and screen printing are also taught. 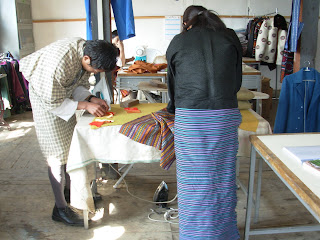 In the dress design class a boy irons carefully 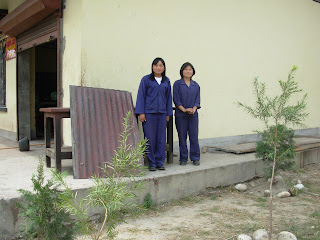 Girls learn to spray paint at the Trades School - without masks or safety glasses. There is no eye or hearing protection in the engineering and grinding sections either. I'd like to do something about that. Any thoughts?

Although men may take four wives, the same right extends to women who are surprisingly outspoken and liberated, particularly when compared to those in countries on either side. Many of them run small businesses in the villages but they are also well represented in the trades schools. The one thing which mars this picture is the sight of men and women from Bangladesh doing the hard dirty work of building roads by hand. 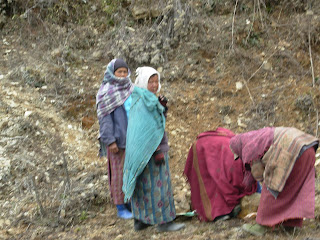 Flowers in the dust- Women from Bangladesh building roads
Many of these women also carry their babies on their backs, despite the cold and often harsh conditions. I was also mildly shocked to see young slightly built girls having to carry heavy guest luggage while strong young men stood idly by.
On the plus side, Bhutan does protect its amazing array of animals which includes rhinos, snow leopards, tigers, crocodiles, monkeys, blue sheep, buffalo, yaks and the endemic Takin, a large creature which has not yet decided whether it should be a goat or a moose and thus has a classification of its own. Bhutan is also famous for it's huge variety of plants many of which have not yet been classified and also its birds, especially the black cranes. 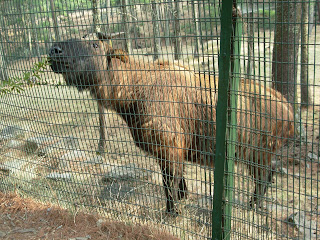 This is a Takin - unique to Bhutan and one of many rare and protected animals. 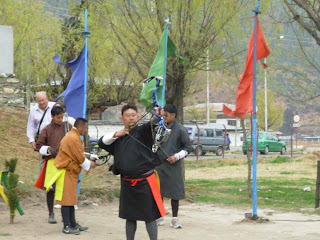 Archery is a very popular sport in Bhutan. These men are shooting at a target 500m away.
The man in brown to the right of this archer wins.The only Olympic medal ever won by Bhutan was for Archery

Not everything is deadly earnest in Bhutan. Athough visitors are supposed to stay with their tour groups, cocooned and quarantined in their hotels, one guide from another group sneaks me out to a disco. I am worried about getting back into the hotel again afterwards, but the hotel proprietor just smiles knowingly and says,"Ah, a little night hunting."

Night hunting is apparently a lot like Fensterln in Austria, the only difference being that the young man actually has to climb into the bedrooms which are usually on the first floor. The trick is for the girl to give directions like "Third bed from the left, " which might be Grandpa's or her mother's whichever is likely to provide maximum entertainment value.
At the disco I am pleased to discover that as with the Russian soldiers I once danced with in Bulgaria in the pre -Glasnost days, we have a lot of music in common, especially the Numa Numa song. 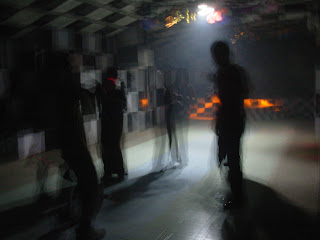 On my last day I did the difficult climb up to the Tiger's Nest, one of many magnificently situated monasteries and one surrounded by myth and legend. I was a bit embarrassed about my slow progress and even had the help of a pony through the rhododendron forest, but others much fitter than I who did it much faster, later suffered altitude sickness and assured me that I had done the right thing.
Alas, I could only stay four days. As the plane did its crazy left hand turn over the Himalaya it was like a beautiful story book closing. There is still so much that I haven't seen. I'm hoping that the Land of the Thunder Dragon won't change too much before my next visit.
Tashi Delek Druk Yul!