Nepal - Under the Himalaya 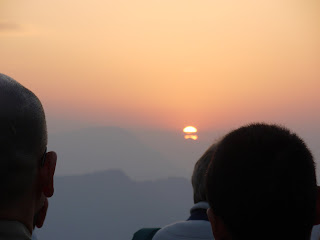 Sunrise over the Himalaya
The tour company isn't all that thrilled to see me when I arrive back in Kathmandu as they have already paid out the money and can't pay me back for my failed mission. After a few days of abject misery, they send me off on a bus to Pokkhara, one of the most beautiful places in Nepal. It's the well trodden jumping off point for treks to the Annapurna Circuit and the Everest Base Camp. I am surprised to see banana palms and hibiscus flowers all along this route.

The rather gothic hotel is beautifully appointed and set near a lake. Although it's rather touristy the bonus is that the town is clean and tidy, the menus are all in English and there is a German bakery. There is even an ATM, the only one outside Kathmandu. This is just as well as convivial host Ramesh soon signs me up for a sunrise glimpse of the mountains and a day's sightseeing on a motor bike. 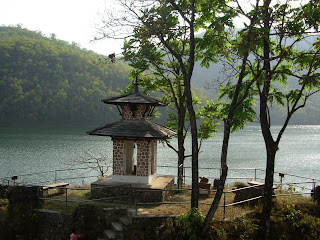 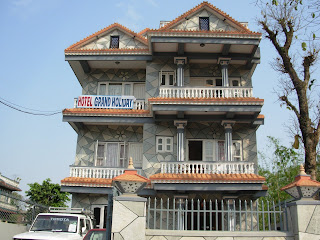 The Hotel Grand Holiday. This crazy paving style of decoration, very prevalent here, is quite different to anything else I have seen so far. There is usually a lot of colourful paintwork around the windows too, similar to that seen in Mongolia. This is not surprising given that many of Nepal's 71 ethnic groups, especially among the trekking guides and porters and many of the Newari traders are of Mongolian descent. In the east, they are more likely to have Tibetan origins while in the west there are Magyars. On the Terai - the hot flat grazing lands to the south, there are more likely to be Indian influences.

Nepalis have this obsession that everyone should see mountains at sunrise. This means getting up at some ridiculous hour in the middle of the night so one can be transported to a suitable viewing point. There could be a good reason for this as later in the day the moisture rises from the valleys and the mountains are often obscured by clouds.

Either way I wake up at the first cock crow and start groping around in the dark for clothes. My phone which I have been using as a clock, has been scrambled since I left home so I have no idea what the time is. I learn a new truism. "Roosters do not only crow at dawn. They crow any time you want to sleep." Eventually someone does come to collect me and we do the half hour drive to the top of the nearest mountain. So does everyone else. Nevertheless it is a spectacular sight to be up above the clouds watching the first rays of sunlight strike the Annapurnas. A strong wind springs up. It's a relief to be taken back to the hotel for breakfast. The place is full of gung ho trekkers from many different countries. 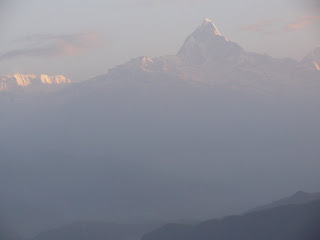 Afterwards I am taken on a motorbike tour of the district. Devi's cave, the largest underground cavern in Asia, was only discovered recently when a Swiss couple decided on a swim in the river and were promptly swallowed up by the earth. There is a curious temple inside. A papier mache cow has been installed in one of the caverns. Pay a few rupee and you are given a metal ball. This is put into a dish - one of those spiral ones - and the cow gives milk. I skip the bungee jumping and paragliding. Though it does look wonderful to be soaring with the eagles on the thermals, it is just too expensive for tourists like me. I visit the Tibetan refugee camp instead. Carpets are being made here and the locals think that the refugees are doing quite well thank you.

Speaking of doing well, having so many affluent tourist predecessors does have its drawbacks. There is the expectation that all westerners should somehow contribute to the education of Nepalis. Everyone wants me to teach or contribute funds or materials to their schools. It's hard to know where to put one's money or energy as the need is so great especially in rural communities. Fourteen thousand people have so far been killed in the war, leaving many orphans and widows who have virtually no government support. However, I am also warned by some locals that many of the schools are a rort, enriching the principals but not the children.

One young man asks me directly to find him another sponsor for his three children. Apparently an Australian couple has paid for their education in a private school for the last eight years and now this has suddenly stopped and he can't understand why. I tell him that perhaps they are sick or have died or they have been retrenched or their pensions no longer go as far as they used to. I tell him how students work part time and parents work two jobs to pay for the education of their own children and tell him how we raise money for schools with cake stalls or lobby governments to improve things for everyone. He at least has a job and the oldest is now nineteen, so he has had a pretty good run. Perhaps some type of loan system could be introduced in such cases or employers could help.

Ramesh who manages the hotel does his charitable giving his own way. Each year he goes to the mountain villages with sacks of rice and clothes. That way he can see for himself who needs what. For tourists it is better to give to schools- preferably those off the main tourist beats, since they are more likely to know which children are in greatest need.

After several days of travelling on buses and motorbikes I take my life in my hands and venture into one of the local barber shops. My hair doesn't turn out too badly so I look down the list of offerings and decide to have have my eyebrows waxed. They have a most unsual method of waxing. The younger barber takes a strand of white cotton and twists it, then literally whips stray eyebrows off. As if this wasn't hair raising enough, he then rubs it all down with Vicks Vaporub to prevent infection. This stings like anything, and I am glad I didn't have anything else waxed but the result isn't too bad, especially after an amazing, head, neck and shoulder massage. 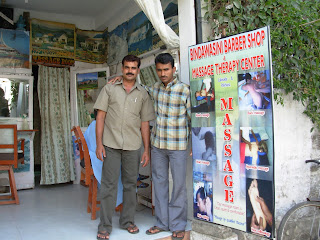 On the way back from Pokkhara I visit the ancient mountain top town of Bandipur with its eagle eye views of the surrounding valleys. 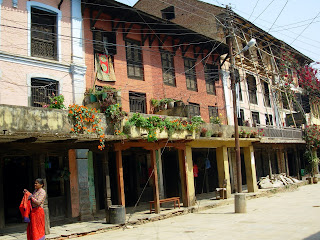 In the town of Bandipur, an intact medieval village in the mountains not far from Pokkhara.

The architecture is similar to that in Baktipur. This is no accident. Back in the days when seventeen different kings ruled the Kathmandu Valley, the King of Baktipur and his supporters were chased to this region. It had the added advantage of being protected by Magyar villages on either side as well as being in the nosebleed section of the 'foothills' giving advance warning of any invaders. 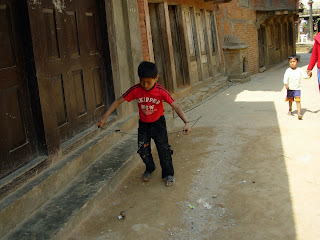 A boy in Bandipur demonstrates his prowess with a top. 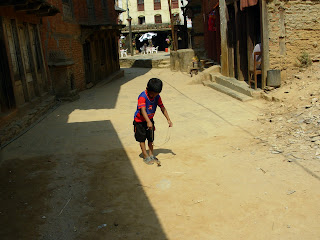 Not to be outdone, his younger brother does likewise
Email Post