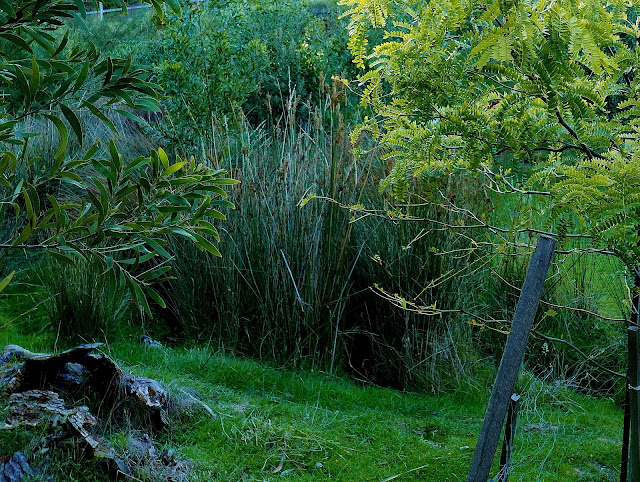 Not into green roofs, or can't do it at your place? Here's a way in which individuals and small communities can do more to make the most of storm water and waste ground.
During my latest officially approved walk I visited what we used to call the “Fairy Garden" until the council gave it a brutal short back and sides about five years ago. Well I'm pleased to report that it’s starting to recover quite nicely. Reeds and native plants have softened its edges. Frogs, birds, butterflies and crickets have begun to return and it is once again a little bit of nature in the city. Humans are not excluded either. There are seats, a nicely weathered picnic table, a discreet rubbish bin and signage. It was such a delight to be there today when we can’t go far afield and I take back whatever nasty things I said about the city council last time. It shows what can be achieved with a little time and effort. However, it's much more than just a pretty face.


The native plants need little attention and tolerate drought and flood better than most. Apart from improving air quality in the city by trapping pollutants, generating oxygen and absorbing CO2, they also help to cool it. With buildings and roads absorbing more heat, cities are often up to five degrees warmer than the surrounding countryside. The vegetation not only slows the rapid flow of water – and we have had some serious flooding in the city in recent times, but prevents our sewerage system from being overwhelmed and stops our topsoil washing off into the sea.


Well, I’ve been thinking…..  Our local school already does this nice thing where each year First Graders grow acorns from a tree at the school and at the end of the year, when Sixth Graders leave to go to High School, they are given a well -established tree as a reminder of their Primary School Years. What if all schools taught children not only to grow trees but planted them as well? How lovely would that be.
at April 18, 2020