"The Viennese anticipate the past with great confidence"
- Bruno Kreisky, Chancellor of Austria 1970 -1983 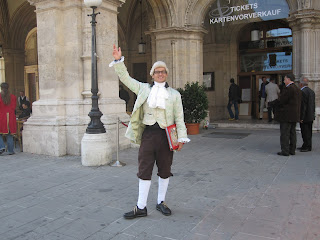 This man outside the Opera house was singing "Macaroni! Minestrone!" in the most delightful baritone
It wasn’t as easy to bring my flight to Australia forward as I expected and it looked like I was going to have to inflict myself upon my relatives in Europe for ten days. Not wanting to wear out my welcome, I spent  a night in Vienna and then went on to Budapest which was supposed to be a lot cheaper. 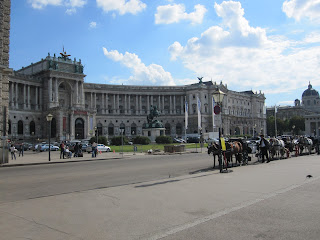 Vienna is full of imposing buildings. This is Hofburg Palace, one of several palaces. Among other things it houses Museums, State Offices, the Spanish Riding School  and The Vienna Boys' Choir. When I first saw those figures on the roof, and many buildings have them, it made me think of people waiting to be rescued after a flood
Vienna, home to the Vienna Boys’ Choir and any number of great composers including Brahms, Schubert, Strauss and Beethoven, is like a grand old dame of Europe with frills and furbelows and golden jewellery -all good quality you understand, if a little old fashioned, and ever so slightly mad. It used to be a Roman fortress and has always enjoyed a bit of the high life except for the ten years immediately after WW II when it was a divided city like Berlin. You can see where Peter the Great got a lot of his ideas. It is everything you could wish for in a Baroque city -  museums and galleries, theatres and palaces, an opera and even a cathedral or two. You catch glimpses of people strutting about in frock coats and wigs and it’s very easy to get bowled over by horses and carriages. 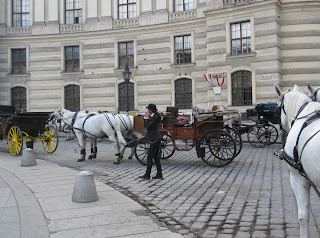 Except for the cell phone, you could be forgiven for thinking you had stepped into a time warp 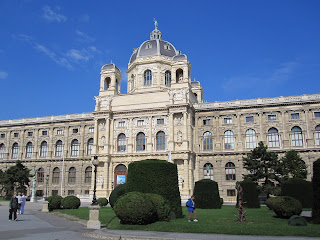 Ethnographic Museum in the Museum Quarter 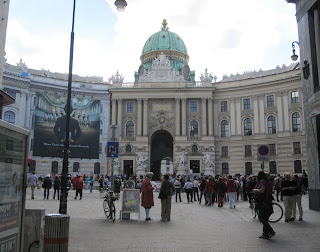 Entrance to the State Theatre 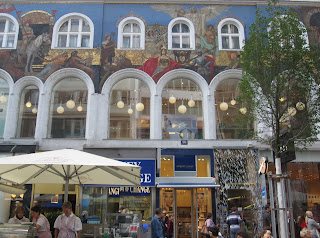 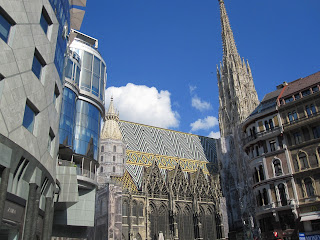 Stefan's Dom  - One of several cathedrals -
Sorry about the parallax distortion. I got a crick in my neck too!
I’m not sure if Vienna invented café society, but it has certainly perfected the art. It is the home of the Sacher Torte and there was even a court case as to who had the rights to it first. It was much too hard to get into the Sacher Café where it originated, in the main pedestrian street, but I did manage to get a little taste in the Café Demel in a side street. Demel claimed to have bought the recipe from Sacher but lost the case and had to make do with the title "The Original Eduard Sacher Torte" while Sacher was awarded the title "The Original Sacher Torte." 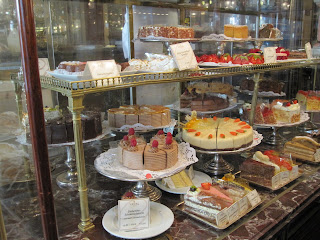 Dieter's beware! The place is full of temptations 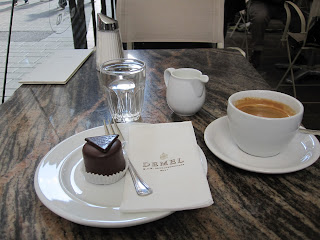 OK I caved in and had a mini Sacher Torte at Demel's to make up for his loss
On the advice of my cousin, or is that third cousin twice removed, I headed straight for the Naschmarkt –he’s a chef, so we were on the same wavelength there. No –one could help me out with directions even though I speak fluent German, because absolutely no one was from Vienna. The spruiker in front of the Opera House singing “Macaroni, Minestroni” was from Romania. The man standing outside the Museum of Ethnography was Italian and most of the people in the street seemed to be tourists. 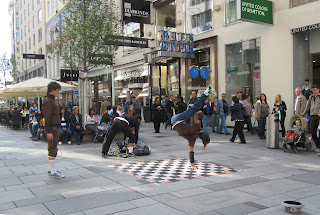 On the way to the Naschmarkt, the Mall was alive with tourists and  buskers 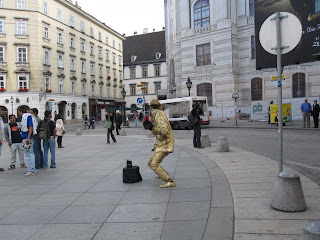 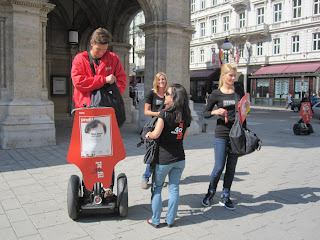 ...and people on Segways promoting a newspaper 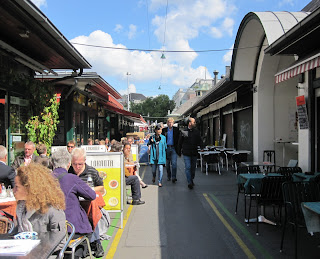 The Naschmarkt
When I finally stumbled upon it there was a tremendous range of eating possibilities – Indian, Middle Eastern, Asian - groceries, cheeses, breads and pastries, and a huge array of fruit, vegetables and spices. However, for some reason I was craving a genuine German sausage. Most of the little stands that once would have offered hot sausages were now selling shashlik and were run by Turks. After running the gauntlet of all the other stalls offering samples of seasoned olives, fetta stuffed apricots and figs  – forced upon me by eager salespersons you understand -I could barely manage the sausage, especially as it was twice as long as  any I had ever seen.  For something made from odds and ends, ears and other unmentionables, it was really quite delicious.  By the way, they call them Frankfurts in Vienna and Vienna sausages everywhere else. 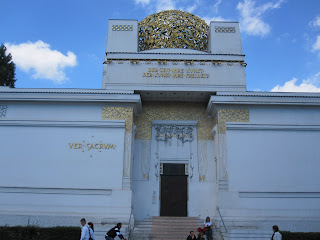 The Seccession. This marvellous Art Nouveau building built by Klimt and other artists in a revolt against conventional art of the time still houses contemporray exhibitions. Unfortunately it was closed too


Fortified, I attempted to visit the Seccession and the Modern Art Museum, hoping to see Klimt who was very busy here and also Klee and one or two others in their native habitat, but, being a Monday, both of these were closed  (why do I get a sense of déjà vu?) and I had to make do with the Kunsthalle. This had a cheerful display of Street Art which I rather enjoyed though it was strange seeing it formally mounted in a gallery - tamed somehow and so was having people pontificate on it.  I rather missed the fleeting illegal aspect of it and coming upon it unexpectedly, but I suppose it is good thing that it’s getting some recognition. 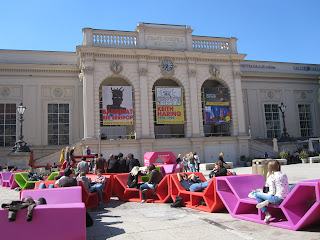 
In another part of this complex, there was a free exhibition of English fashion.  All can say about this is that it was certainly original and very colourful, but I’m not sure I liked its attitude to women, nor can I see myself in those fashions any time soon, but I'm glad it was free. 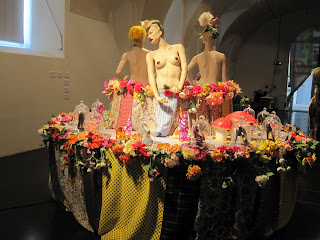 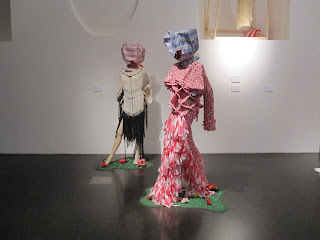 Britain has given us Twiggy and Carnaby Street, but I'm not sure this will catch on
This garment is made entirely from Safety Tape
I do have one of those bags


Remember Brahms, Strauss and all that? Well there’s still a big music scene in Vienna though I'm not sure the classical composers would approve. Bands have names like Cephalic Carnage, Warbringer, Ion Dissonance, Days of Loss, Black Inhale, The Boy Will Drown, All Falls Down, The Black Dahlia Murder, Despised Icon, Dying Fetus, Ill Disposed, Death Marker, Grave Mentality, Cemetery Garden, Sabre Toothed Zombie, Cadaveres, Winds of Plague, Devourment, Bleak Serenade, After Burial. They do make groups like  Demolition, Psychospank and Initiation of the Misled, sound positively wholesome and jolly, like an afternoon with the  von Trapp  Family (Sound of Music).  Hope the music is less depressing than it sounds and that the names don’t so much reflect the social mood of the young, but a need to shock to be noticed in an increasingly competitive world.
I’d like to say that I went on to the Opera, or a concert, the theatre or at least one of the many elegant nightclubs* -in fact, according to Wombat’s (Hostel)  Vienna for Aliens “…there is a small area of cobbled streets near Schwedenplatz with 25 pubs and bars..” that is affectionately known as “The Bermuda Triangle, but if I was merely poor and cheap in St. Petersburg, I was near bankruptcy now, so I caught the night train to much more affordable Budapest instead.
Before I left, I did call in at the Opera House Loo. I didn’t even need to go, but this being the Opera House Toilet and me being something of an expert on plumbing by now, I just had to look at this one. The entrance was extremely grand and the little cubicles all looked like dressing rooms. My anticipation knew no bounds. I had great expectations. I thought at least the toilet would burst into song the moment you lifted the lid or a nice little Strauss Waltz would begin when you flushed or that there would at least be footlights, liveried attendants, powder puffs and gilded seats. 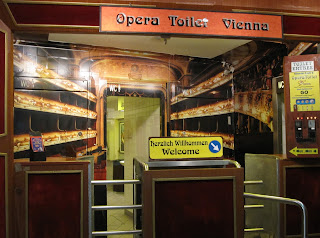 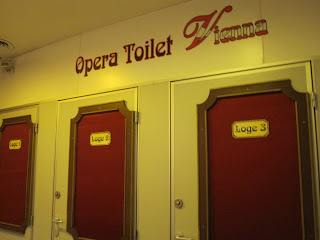 The cubicles all looked like dressing rooms. I just had to have a peek inside 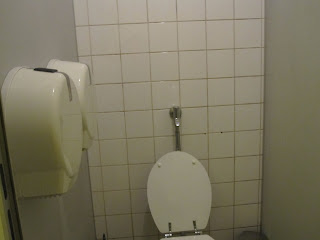 It was a bit of a let down. Just a very ordinary white toilet bowl, no music, no footlights, no gold seats

'Bye  Vienna! It was nice knowing you and I really loved the food.

*I’m sure all my gay friends would adore Vienna. In the Wombat guide there’s even a special section on Queer Vienna.
Email Post